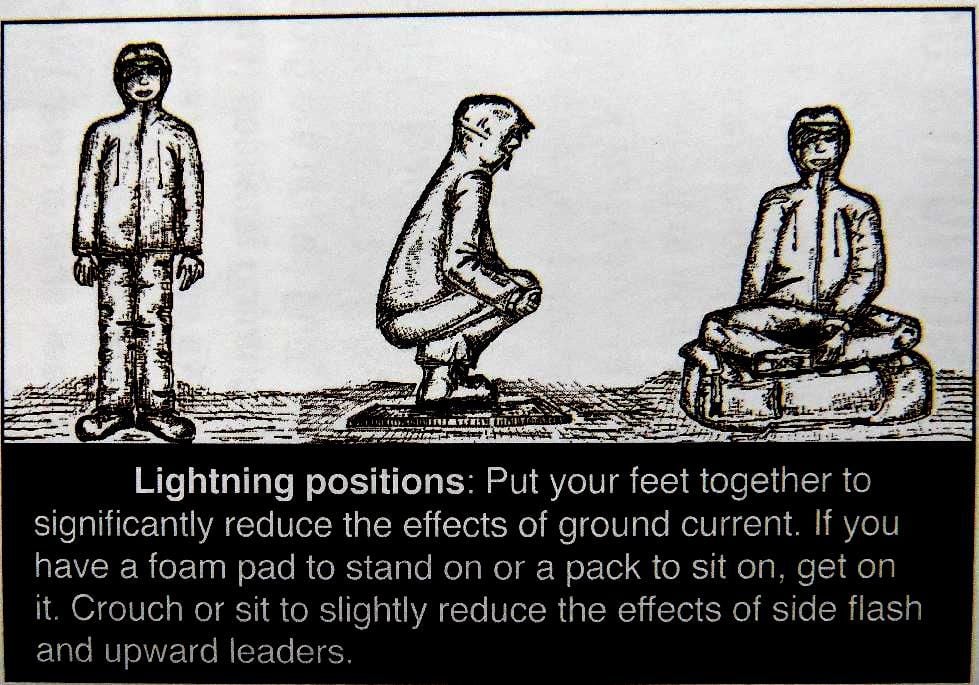 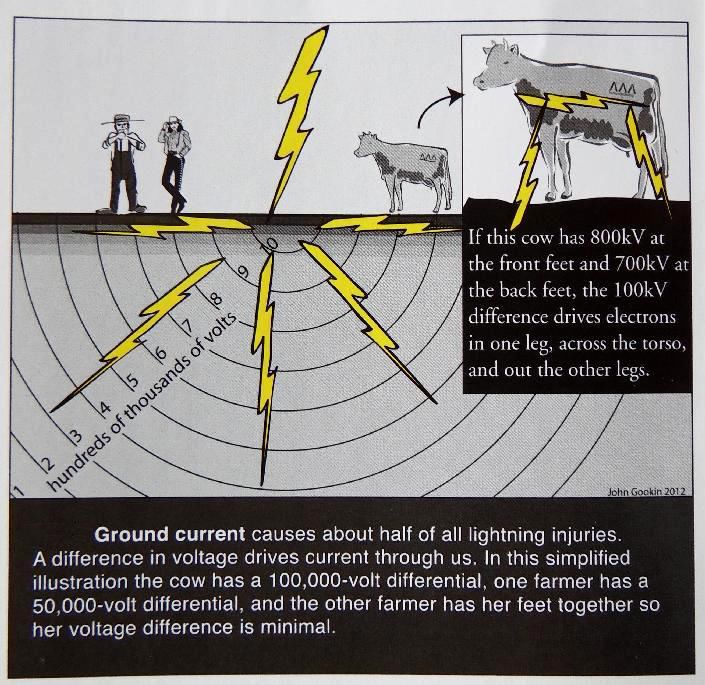 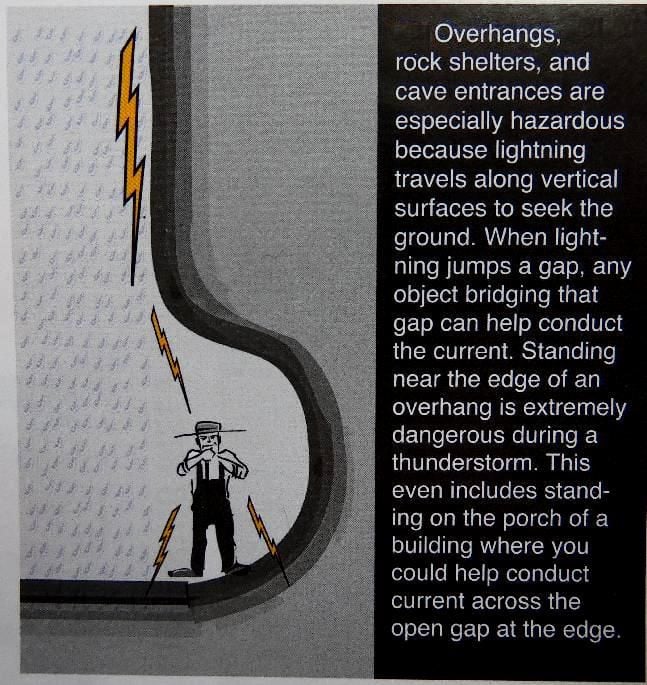 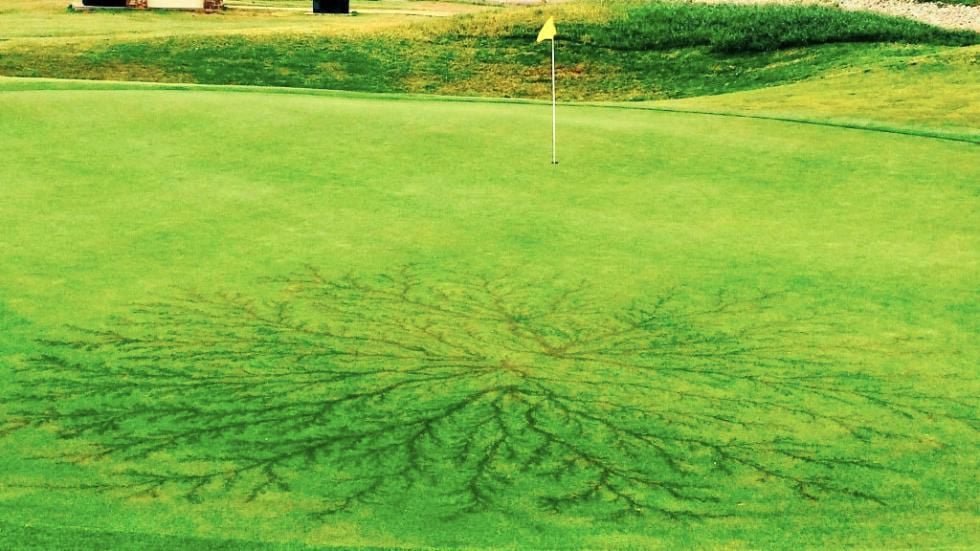 Aftermath of a lightning strike on the 15th hole at Weeks Park Golf Club in Wichita Falls, Texas, on May 17, 2016 showing the reach of ground current. 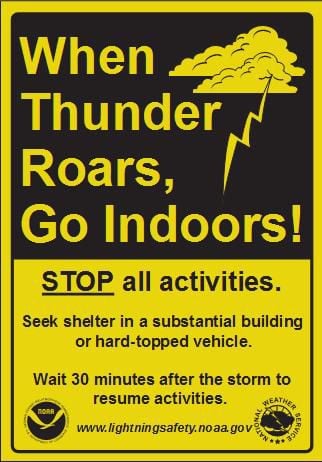 It’s that time of year again. The more you learn about lightning, the more you will respect it and know what to do when it’s close. Here is some information that may be helpful, first published here 5 years ago this month:

By far, the safest place to go in a thunderstorm is inside a sturdy building or metal topped vehicle away from windows, plumbing, or electrical connections. If there's time before the storm, you might want to powder your nose and unplug sensitive electronics, but once you hear the thunder, it's best to stay away from water and electrical outlets, even indoors. I know an entertainer who took a big spark to the teeth from his microphone because he kept singing at an indoor event during a thunderstorm. He was ok, but not very comfortable for a while.

Metal topped cars, as opposed to ragtops or fiberglass body vehicles, are your next best bet when thunder roars; just don't lean up against the inside walls. It's the metal body that protects you, not the rubber tires, so bicycles or open tractors or golf carts won't help, except to get you quickly to a sturdy building.

Most people know to get out of the water when a thunderstorm is anywhere nearby, but sometimes someone isn't paying attention and doesn't get out fast enough. Don't be that person.  A recent NOAA analysis of lightning fatalities over 10 years showed that fishermen accounted for four times as many lightning deaths as golfers.

There are several ways lightning can hurt or kill you; you don't need to be the lucky one to be struck directly by the bolt. But if you are caught on a mountain top or ridge, this greatly increases your risk of that type of direct strike, which is the most deadly. As soon as you have any clue that a storm is brewing, get down from there. Better yet, don't go up that day at all because the forecast was your clue. If you wait until you see or hear the storm, you may not have time to make it to shelter.

Finding an overhanging rock or cave to shelter in can present its own dangers.  So can standing on your porch watching the storm.  As lightning travels along surfaces it will spark across gaps, like the mouth of a cave or edge of an overhang. If you're standing or sitting there in its way, it'll go right through you and ruin your day for sure. Far back in the cave is a better plan as long as some critter hasn't already claimed it.

Another way lightning can get you is called side flash. If you take shelter from the storm beside a nice tall tree and that tree takes a direct hit, the bolt could easily flash over a few feet to you, a much easier path to ground than the tree trunk. In addition, trees struck by lightning can fall, burn, or blow into splinters, so you risk injury from that as well.

Any metal object can conduct the electrical charge of lightning long distances. This includes metal fences, lifts, electrical wires, cables, etc. You want to avoid contact with these things, of course.

But most people who are hurt by lightning are hurt by something called ground current. When a bolt of lightning hits the ground, the electrical charge travels through the ground. How far depends on a lot of factors, like how damp the soil is, but anyone standing, sitting, or lying on the electrified ground is in danger of being electrocuted. This is what causes whole herds of cattle to be killed by one lightning strike. This is why hikers caught in a storm should spread out, not huddle together; if everyone is hurt there's no one to help. This is why lying on the ground is not a recommended lightning safety position. Lying on the ground, even asleep in your tent, makes you more vulnerable to ground current if lightning should strike nearby. If you are asleep in your tent and a storm approaches, the best thing to do is wake up and make for your metal topped vehicle as quickly as possible.  If that isn't possible, you'll have to make a decision. Will risking hypothermia out in the rain, wind, and cold be more dangerous than staying in your tent and assuming a better lightning safety position? Remember, your tent poles, metal or fiberglass, might just be the tallest things around and make you more vulnerable to a strike than out of your tent.  Some have reported hearing their tent poles start to clack and hum before a strike, but try to make your decision before that happens. Sometimes there are just no safe alternatives, and you have to resort to a higher power for help.

What was that better lightning safety position I just mentioned? The nature of electricity is to take the path of least resistance from one place to another. With ground current, that path might be in one of your feet and out the other, via your body. Standing with your feet together, or even one on top of the other, will help make you a less attractive path to the current. (A lower volt differential, for you electricians.) Standing this way on layers of dry folded up blankets, sleeping bags, clothing, your pack, whatever you have, might help keep you from being the path of least resistance as well. Crouching down some isn't a bad idea, as long as it doesn't put more of you in contact with the ground.

If all of that sounds a little scary, it should. There are no safe places outdoors in a thunderstorm. By far the best thing is to avoid them, schedule your outdoor adventure for another day when no thunder is in the forecast, and be in a sturdy shelter instead. Forecasting is not perfect, not even mine. Sometimes you are going to cancel a trip based on a forecast and the storm never happens. The tendency is to feel a little silly and not pay attention to the forecast next time. That's a big mistake, you were not silly, you erred on the side of caution and showed you care about yourself and the people with you.