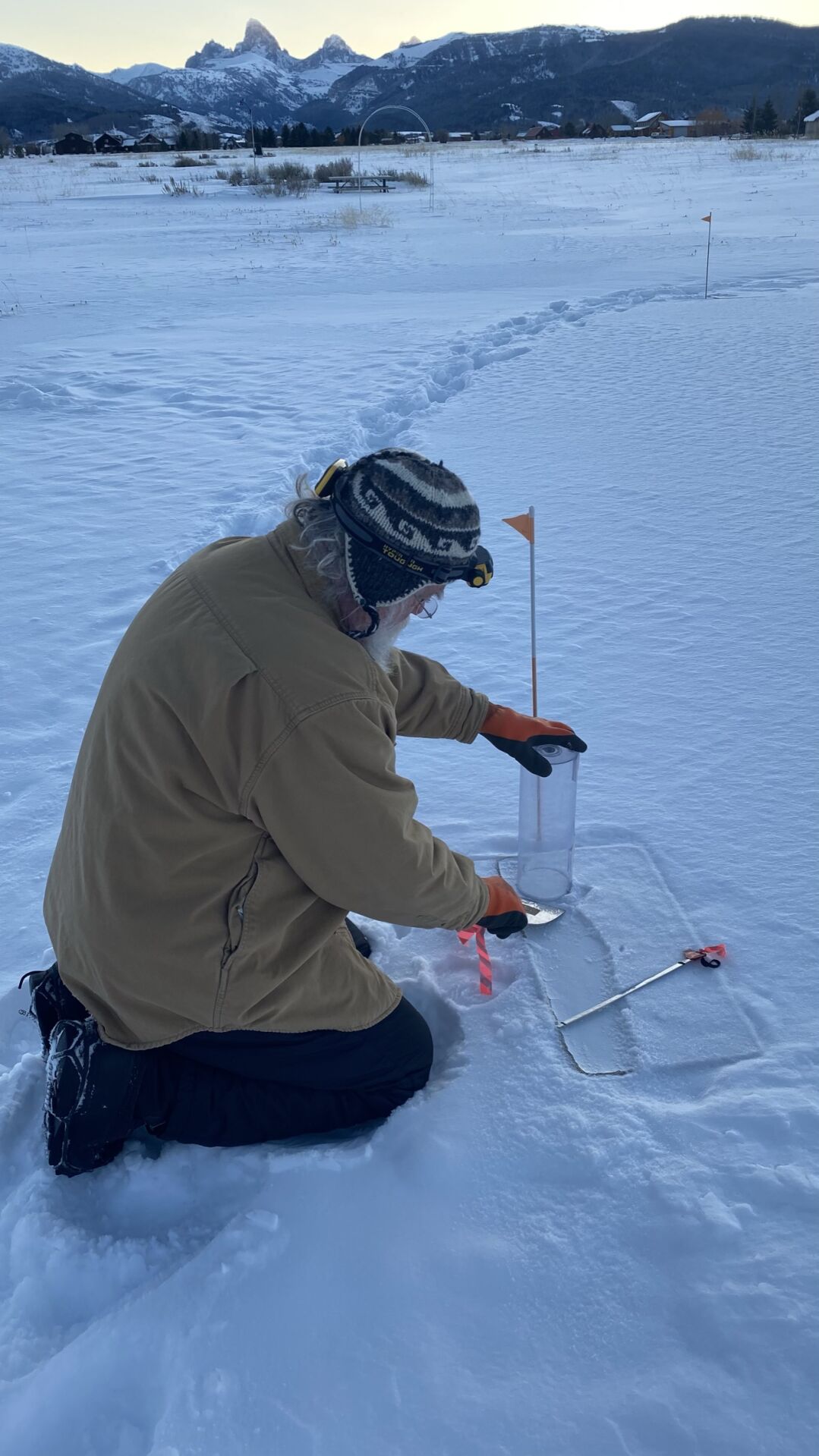 Taking a core sample of new snow on the board to determine its water content. 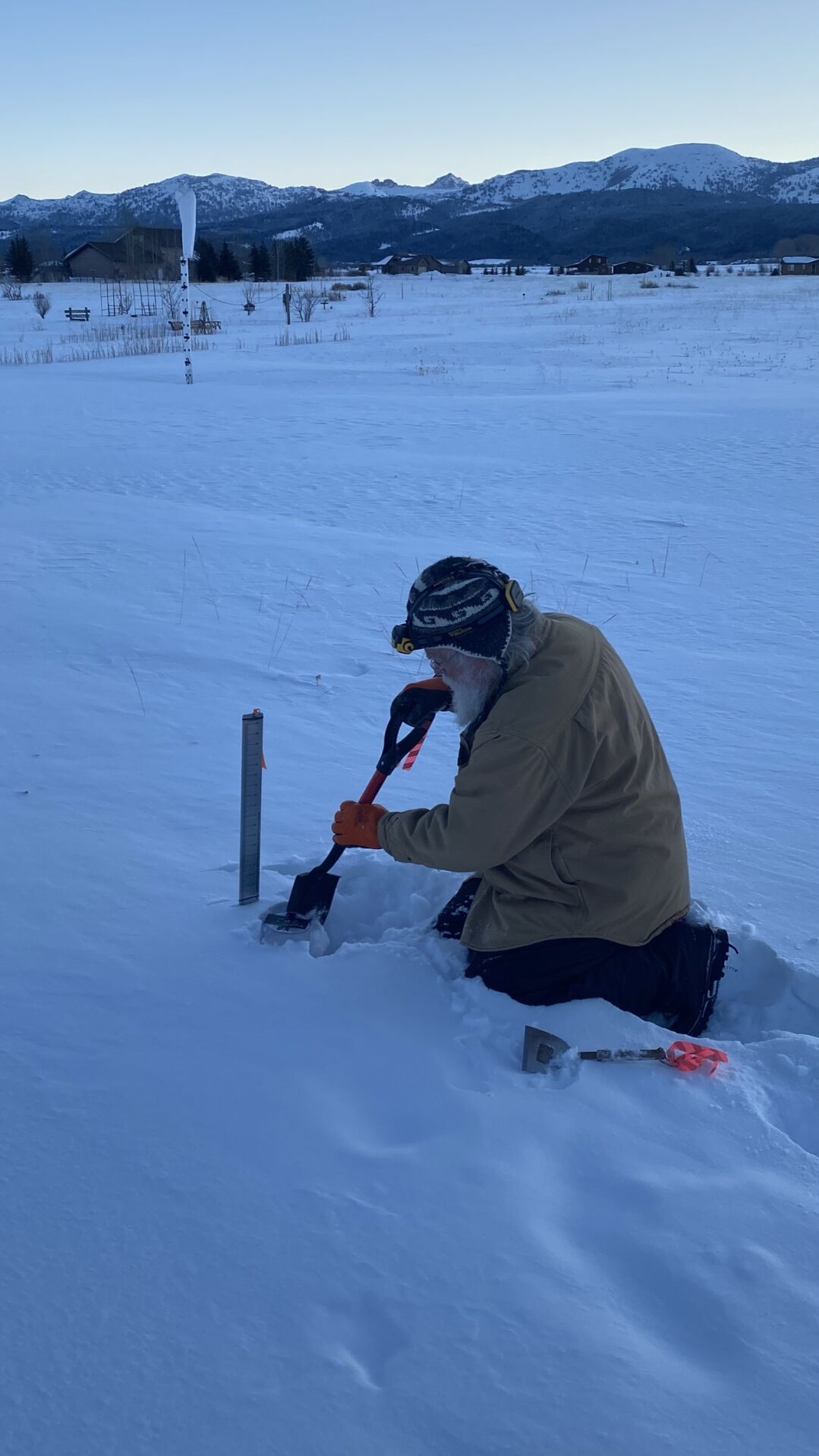 Digging out the cylinder containing a core sample of the snowpack. 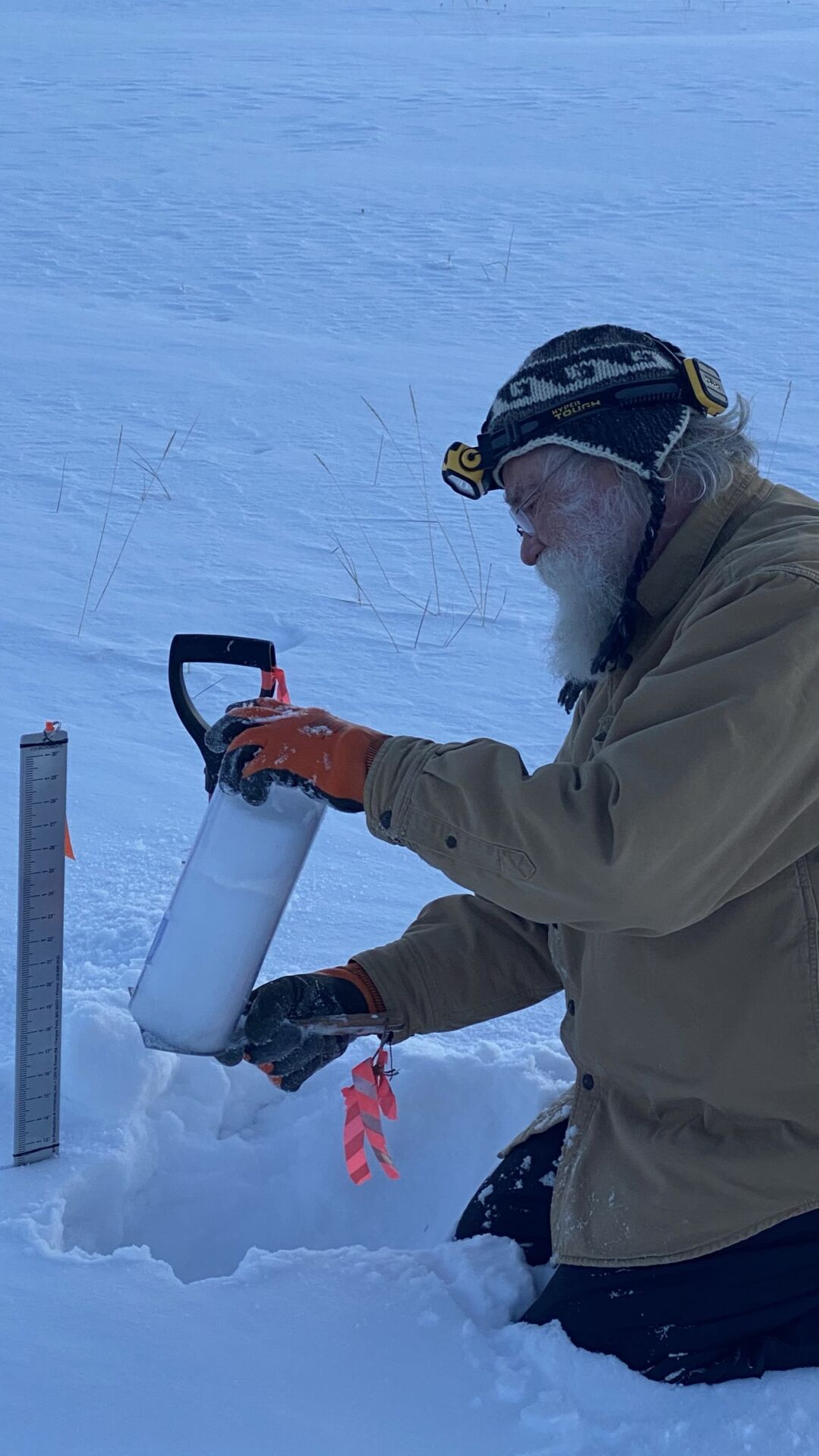 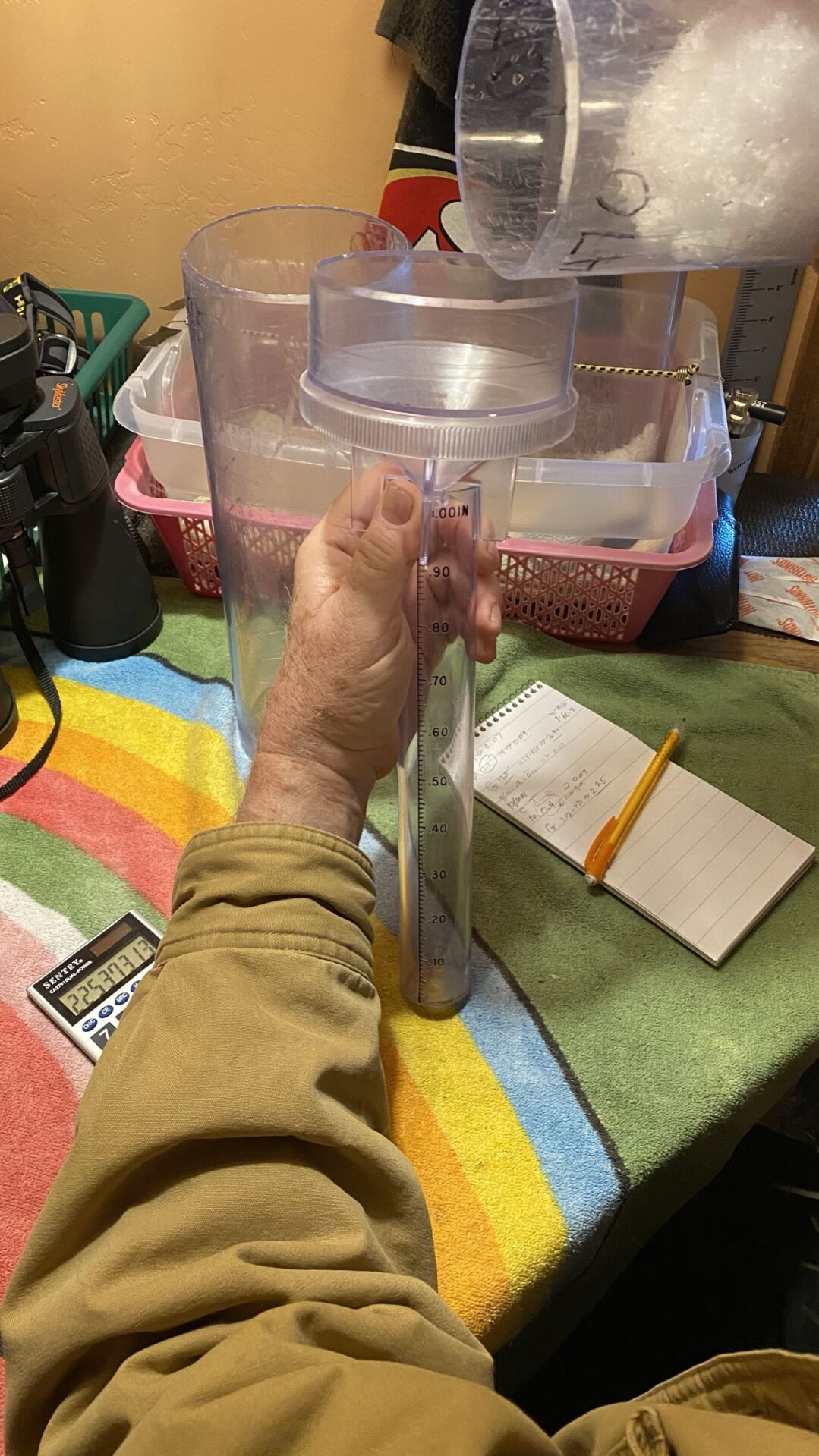 Pouring the melting snow into the measuring tube of a rain gauge. 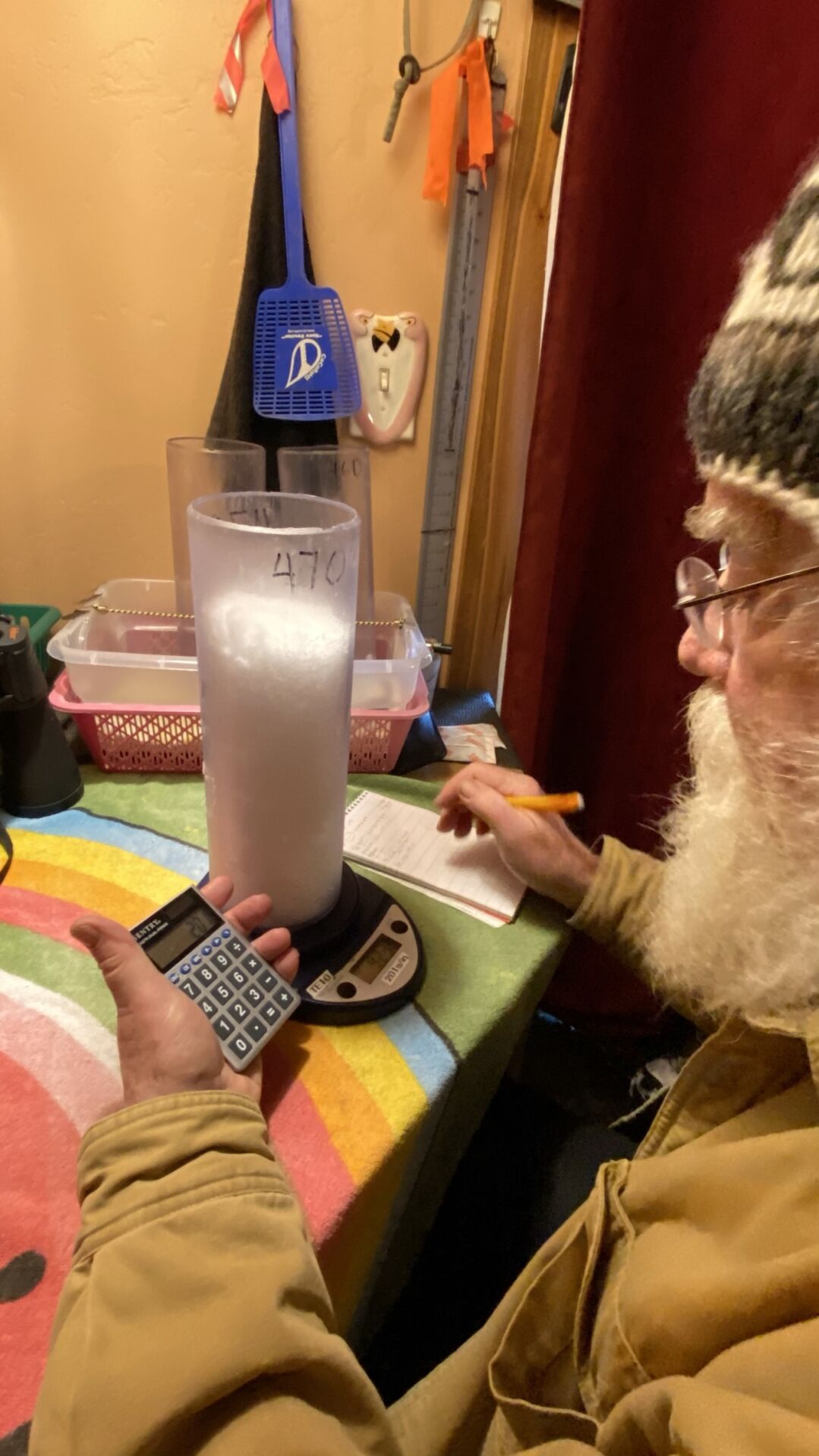 Weighing the core sample to do the math and determine its water content.

There are many things digging down into the snow can tell you. If you take a good avalanche class, you will learn and practice several of them, and the information you gain can save you from a backcountry disaster. Before venturing out off the groomed trails, such a course is highly recommended.

Each snowy winter morning, I perform a simpler test at my measuring spot north of the airport in Driggs. Here, we are interested in the depth of the snowpack and how much water the snowpack contains. The snow water equivalent (SWE) is helpful information to anyone who needs water to live (all life as we know it) and foretells oncoming spring floods or summer droughts.

To measure the SWE of the snowpack, first, you need a core sample of the snow. I use the cylinder from my 4-inch rain gauge. Since the cylinder is a foot long, if the snow is deeper than that, I use a longer piece of 4 inch PVC pipe instead.

Pushing the cylinder all the way down to ground can be a challenge, especially if there are layers of ice in the snowpack; you might need to give it a tap with your shovel to break through. Twisting the cylinder as you push helps too. But that’s the easy part.

The snow’s water content is reported in inches, that is, how many inches of rainfall the snow would equal were it to all melt at once. But keep in mind that we won’t really receive that much water. Unless there is an unusually fast warm-up, some will melt and sink into the soil, some will melt and evaporate, and some will sublimate from solid snow to water vapor without ever being a liquid at all.

Once you have your core sample, there are two ways to determine its water content. One is to melt the snow and pour the water into your rain gauge's measuring tube. Again, easier said than done. The most efficient way to melt the snow quickly is to add some hot water and swirl it around. If you do that, you need to carefully measure how much water you add so you can subtract that amount from the total later.

The other way involves weighing the snow and determining its water content mathematically. Before doing that, you’ll need to know the weight of the empty cylinder to subtract it, and how much an inch of rainfall weighs so you can divide it into the total weight of the snow in your sample. In my case, that’s 201 grams for an inch of water. Of course, you’ll need a good scale, and a calculator helps too. (Or a slide rule for us old-timers.)

That might seem like a lot to do every morning, but the information gained and reported can prove very helpful, particularly to agriculture in this area where we rely so much on the snowpack for our water supply. And don’t forget that two-thirds of the electricity Idaho uses is hydroelectric, generated largely by flowing snowmelt.