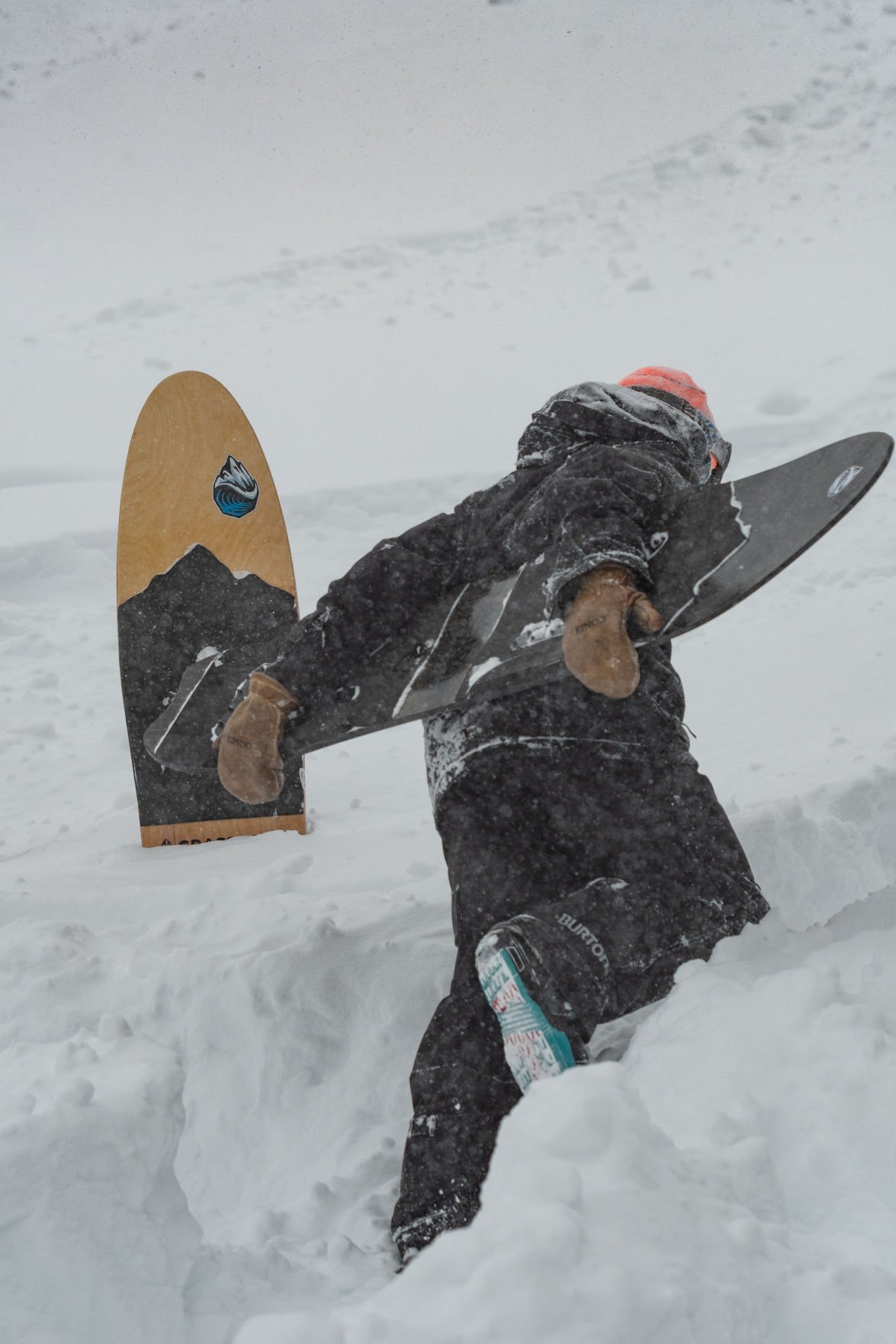 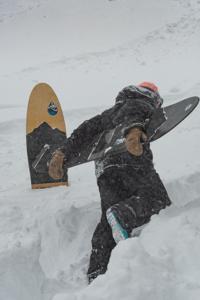 Walker Bender takes his first steps up the bootpack to go for another round of turns on Teton Pass. 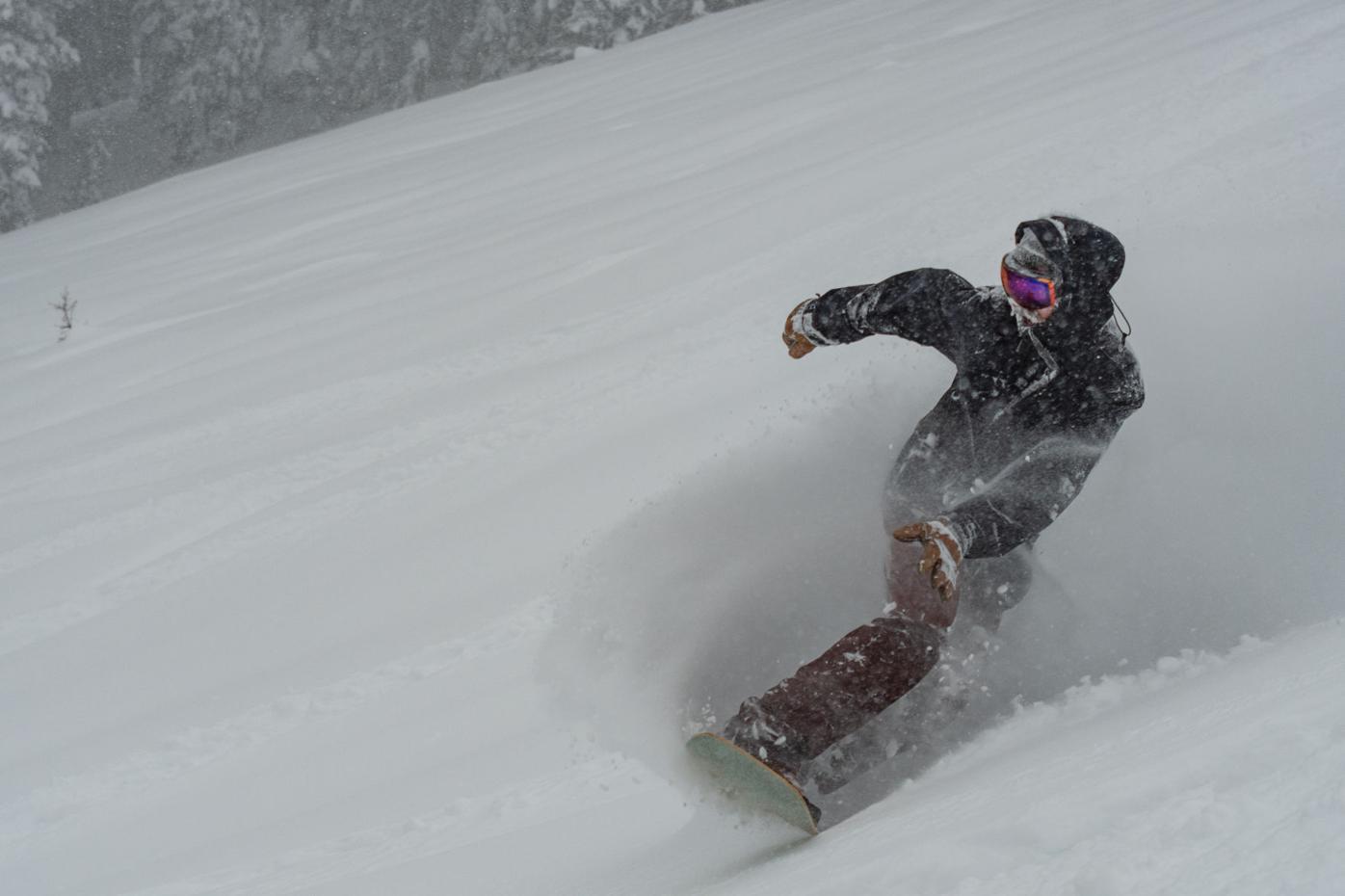 Even with the snow both flying and falling all around him, Dave’s veteran style cannot be obscured. 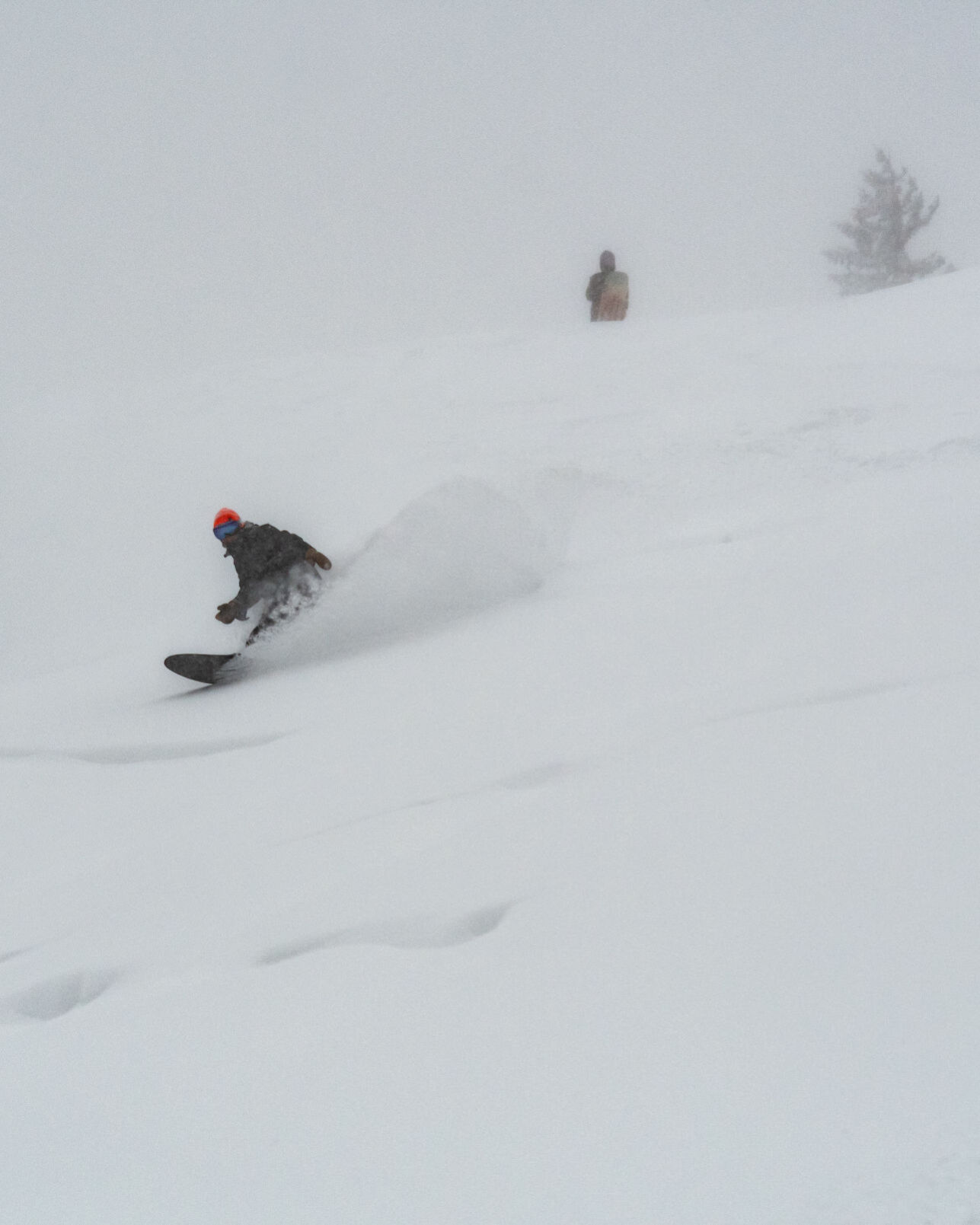 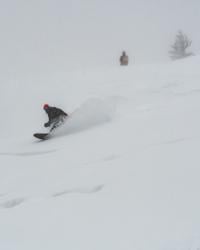 Walker Bender follows through his turn under the proud eyes of his father Dave. 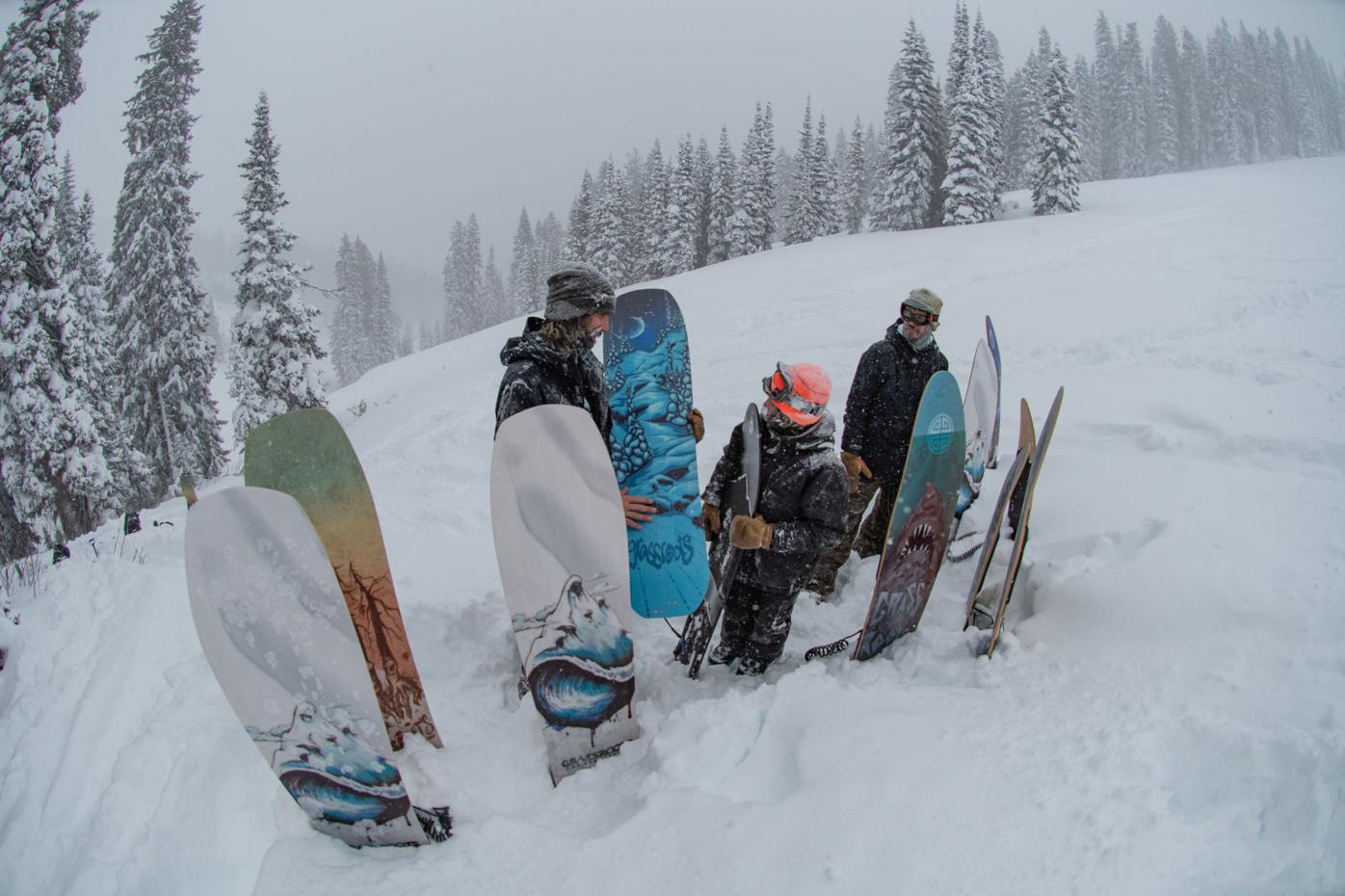 The Bender clan talks over some different Grassroots boards during a pre-bootpack break. For Dave (left), Walker (center), and Dan (right) discussing shapes and styles was the second most common topic of conversation, of course after the quality of the surf. 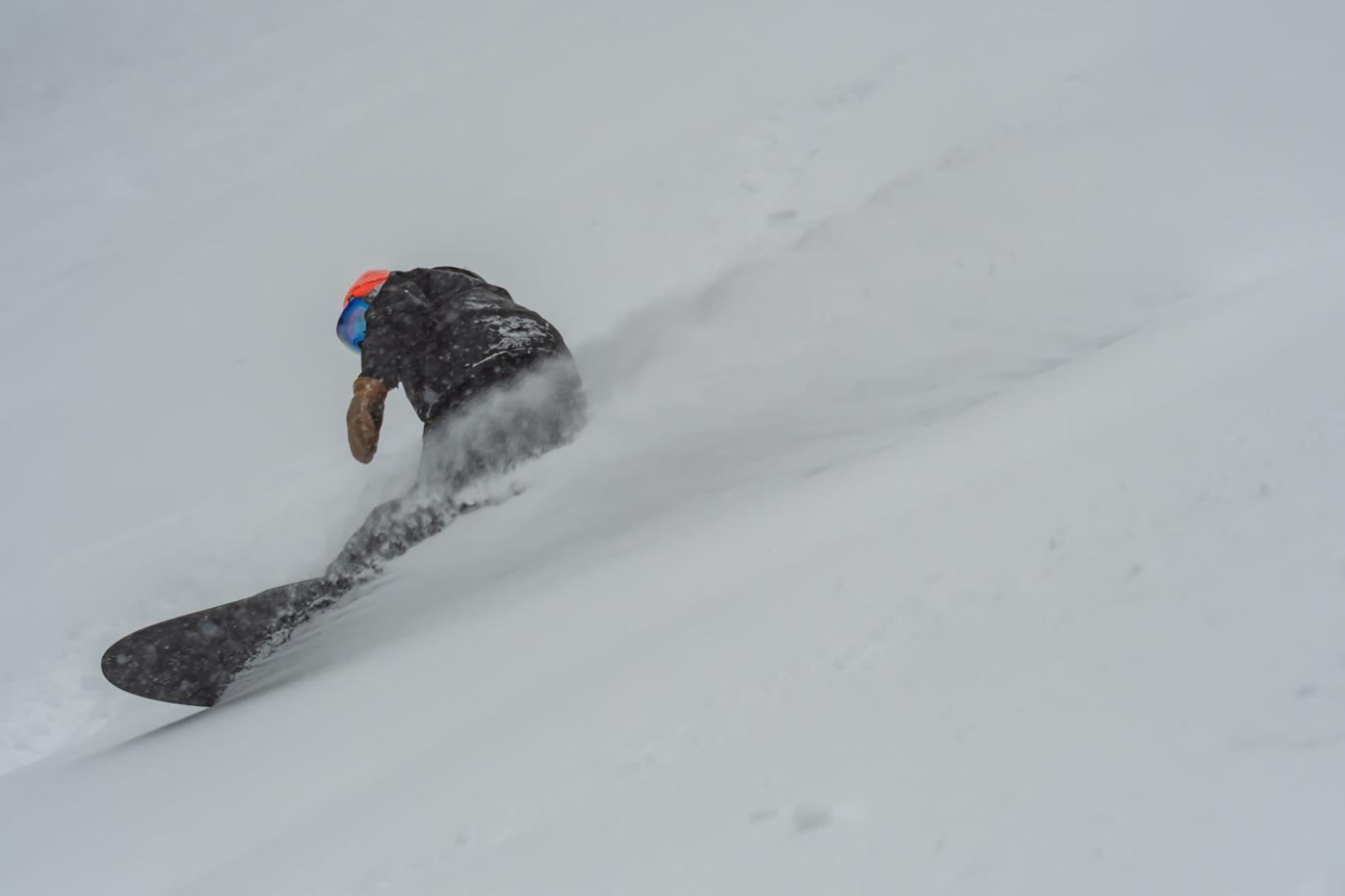 Walker and the White Wave.

The snow squalls, the rapidly dropping temperatures, and the whip of a Wyoming wind have filled the air on this late December day.

At the bottom of a short and at times stout boot pack on the south side of Teton Pass, a bunch of wooden planks stick out of the snow near a group of trees.

It might as well have been a beach for Dave, Dan, and Walker Bender.

With a beautiful swell on hand, the gettin’ is good.

It’s hard to imagine a better setting to catch the white wave.

Powsurfing, “the perfect combination of skateboarding, snowboarding, and surfing” according to Dave Bender, is done by simply standing on a very stiff all-wood board and turning down a slope.

There are no bindings (although there are foot grips), there’s a leash to keep the board from sliding down the mountain, and powsurfers are meant to be used with soft boots.

Even snowboard boots are built too stiff to take advantage of the surf.

“You look at the shape and it’s way different than taking your bindings off of a snowboard and trying to ride it down the mountain,” said Bender. “These things are tailored and perfected for just soft boots.”

One of the sweetest parts for Bender isn’t limited to the copious amounts of bindingless turns on the way down.

The moments that have tended to stand the test of time better than others are the smiles on the faces of those who have seen the light of powsurfing.

“I’ve taken close to a hundred people out on their virgin ride on a powsurfer and I get a very similar reaction every time,” said Bender. “The smiles at the bottom of the hill, after their first run, I wish I had a camera for every one.”

Bender has seen nothing but youthful exuberance on the faces of those that have got it good.

“All reactions point to the youth, I hear a lot of this is taking me back to when I’m 12 again or this makes me feel like a little kid again,” said Bender.

“Probably near the top,” said Walker.

The ability to share the surf is something that keeps Dave thankful.

“It’s a pretty special thing, and I’m pretty grateful for my health and the ability to be doing it,” said Dave.

You best believe that while catching the winter swell is a favorite of the Benders, it is just one of the activities that they share and excel at as a family.

“As a family, mountain biking has been a huge part of our lives,” said Dave. “We mountain bike a lot, we skateboard a little bit, we do some backpacking too.”

The rhythm with mountain biking is distinctly similar to that of powsurfing for the Benders. Dave likened it to the source of all the fun.

“Mountain biking kind of complements the snow ‘cause we’re riding the same mountain slopes that we do on a powsurfer and a snowboard,” said Dave. “The flow, looking around these mountain bike trails, they are built like a river.”

“It kind of goes like water does down a mountain,” he added. “It doesn’t make sharp turns, it goes in a really flowy line.”

Walker has clearly taken to this belief with the energy one would expect from a kid his age. It’s apparent not only in his powsurfing, but also in his biking and snowboarding.

In summer of 2020, Walker stepped to one of the classic Teton Pass freeride test pieces, the notably large and exposed “Canyon Gap.”

“Me and my friend Bennet went up and we were thinking about it,” said Walker. “Bennet went first and so I just got motivated to send it, it was a lot easier than hitting it by myself.”

After stomping it (of course he did) Walker took it in stride according to Dave.

“It’s about a 30 something, 35-foot gap, and he’s getting it good,” said Bender. “He’s doing it with no hands and taking his feet off his pedals and doing all these knack-knacks and can-cans.”

Being in the right environment certainly never hurts.

“The trail system here helped on by Mountain Bike the Tetons and TVTAP in the valley is incredible,” said Dave.

The way the Benders’ lifestyle works is due to capitalizing on the chance to build with a degree of flexibility.

The Benders homeschool their children, which allows them to spread lessons through the year and make time for outdoor fun.

“We’re homeschooling so when I’m at work the kids go to school, bang some lessons out, and when I’m off it’s pretty much recess,” said Dave. “We got a pretty good schedule.”

That great schedule is why we were able to meet up at two in the afternoon on a Thursday. Dave and his brother Dan have put on some small demos around the area, not for any company, but the love of the surf.

Through his personal relationship with Grassroots Powsurf founder Jeremy Jensen, Dave gets some boards that may or may not have made it up to Grassroots’ high standards.

“I don’t have any stock in the company but he’ll send me some boards and I’ll take people out and put on some demos, usually just kinda word of mouth with people from work, hockey, or the neighborhood that are interested in powsurfing,” said Bender.

Bender and Jensen met while working a cafe and riding together at Snowbird in the winter of ‘97-’98, but lost touch not long after.

“We rode together a bit at Snowbird as acquaintances for a few years,” said Bender. “I called Jeremy and reconnected with him, I still keep in contact with some buddies from Utah and I got his contact information and rekindled that relationship.”

Bender is very loyal to Grassroots not only through his personal connections, but personal experience on their boards.

“I had tried this powsurfer up on Teton Pass, it was like a dog trying to run away from its owner,” said Bender. “I couldn’t stay on the thing. I tried it again a couple of years later on a Grassroots board and I stepped on it and powsurfed the whole way down Telemark Bowl without falling.”

I had to give it a good try, and I ended up with the exact same experience that Dave had. I didn’t fall once that first run, and there were arguably some of the best feeling turns I’ve ever had. Hitting the ground running.

The distinct level of purity in a non-metal-edged wood board without bindings is apparent from the bootpack to the blower turns.

Softboots, like the ones you would take out on a blustery day to snowblow or shovel, are best for the surf.

Powsurfing is also ideal for avalanche danger days, where any unexposed slopes can yield at least a few waves.

“If the avalanche danger is high you just go to the little neighborhood hill and session it,” said Bender. “You think you’re going to be there for thirty minutes and half the day’s slipped by.”

The Benders have even gone on splitsurf adventures (a powsurf board that splits a la splitboard) with Grassroots’ Jensen, a day remembered fondly by Walker.

“There was this one day up Taylor, Mr. Jeremy (Jensen) came out and we skinned up Taylor, went off the backside,” said Walker.

He described the day’s snow using a name that I will use more often.

“It was a bit thin at the top, but it got better as we went down,” said Walker. “It was so fun, it wasn’t super steep, it was great hippie-pow.”

Dave elaborated on the label.

“We call it hippie-pow, that low-angle shallow snow,” said Dave.

Some of the best turns can be had where you least expect them, and Dave knew that I had a tough job ahead of me with writing this report.

“You’ve been on the board powsurfing, it’s hard to articulate how much fun it is without sounding like a kook,” said Dave with a good laugh. “I call it the fountain of youth.”

Ever since he found it, Dave won’t ever let it go.

“This place is home, I’ll probably die here,” said Bender. “The winter is what made it stick really.”