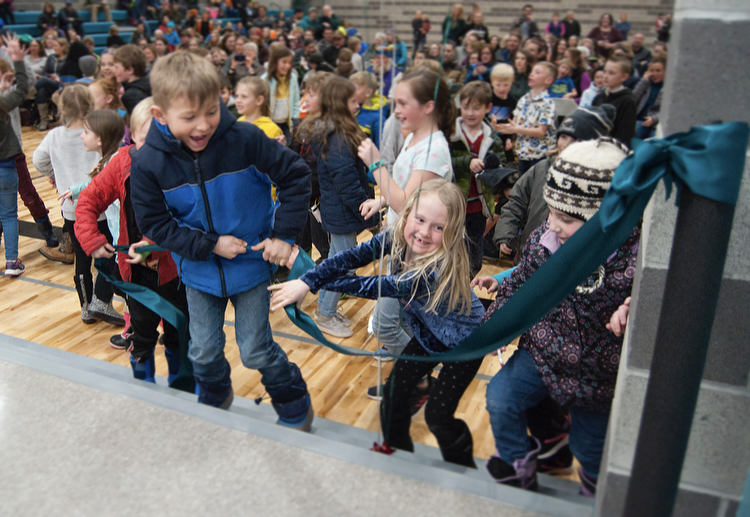 Victor Elementary School students celebrate after the ribbon was cut on Feb. 26 for the new school’s grand opening. Both Driggs and Victor hosted open houses and community celebrations and students had their first days at the new facilities on March 2. 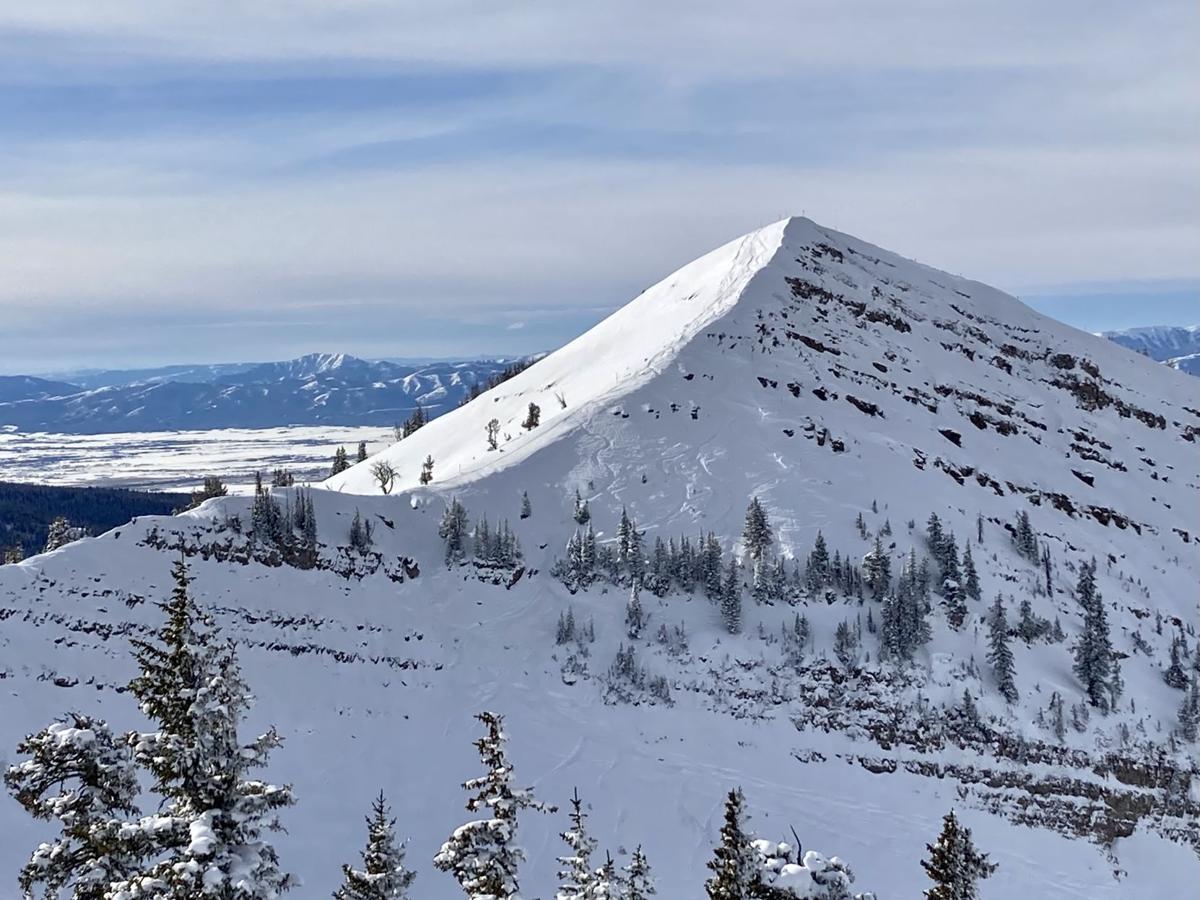 Peaked Mountain as seen from Mary’s Nipple at Grand Targhee Resort. One of many changes proposed in the resort’s master development plan is the expansion of the special use permit boundaries onto the south-facing slopes of Peaked. 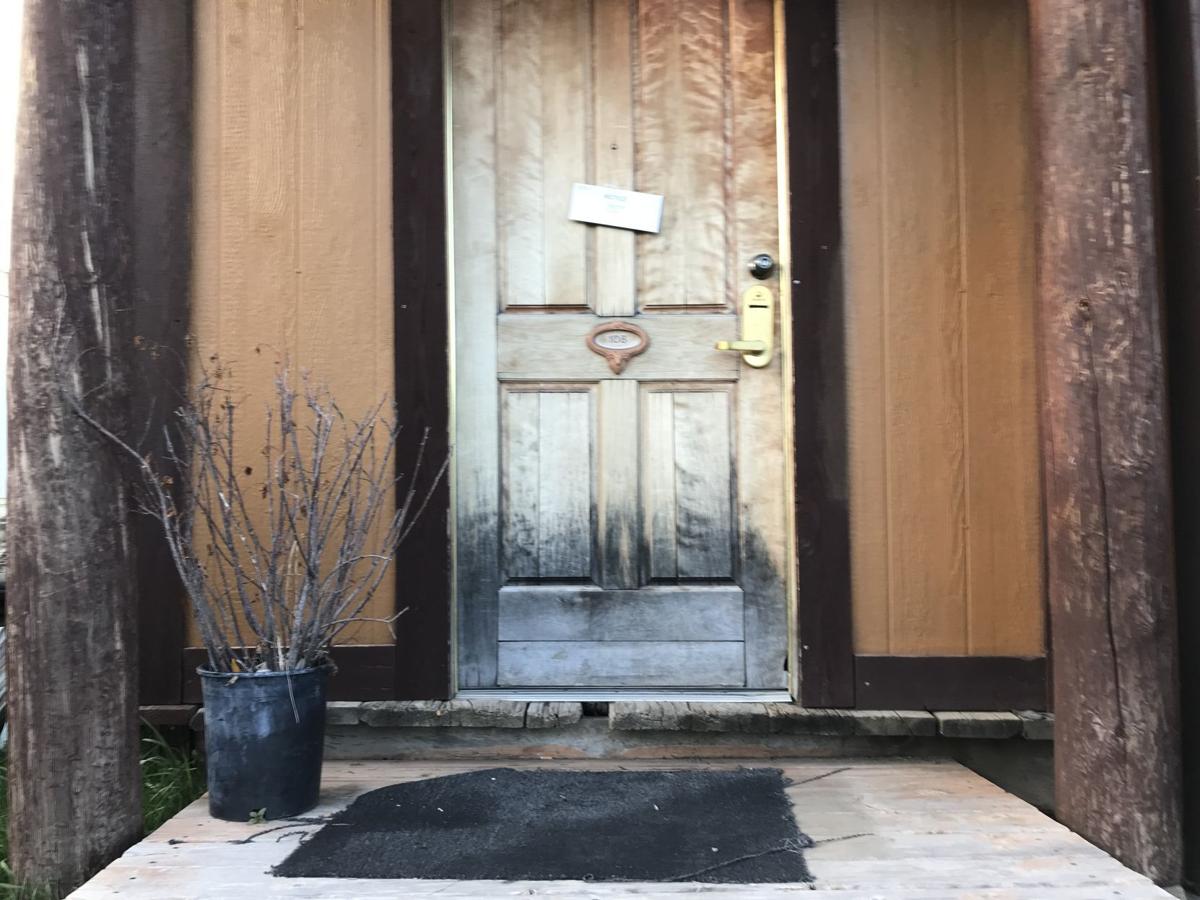 In June the manager of Teton Valley Resort taped 90-day eviction notices to the doors of the nine units in the Rocking H mobile home park in Victor. A regional housing nonprofit says that according to state law that was inadequate notice for the tenants. 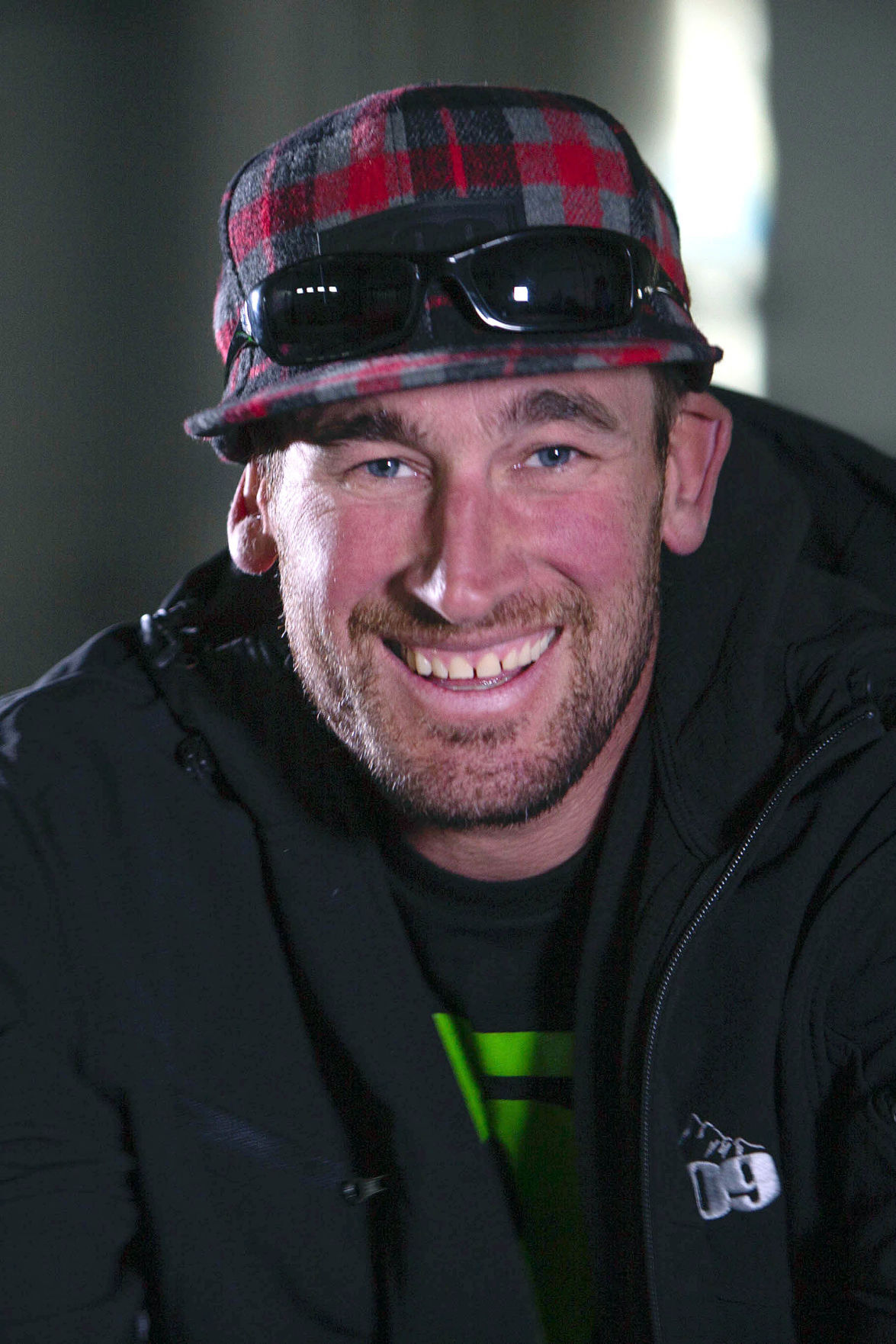 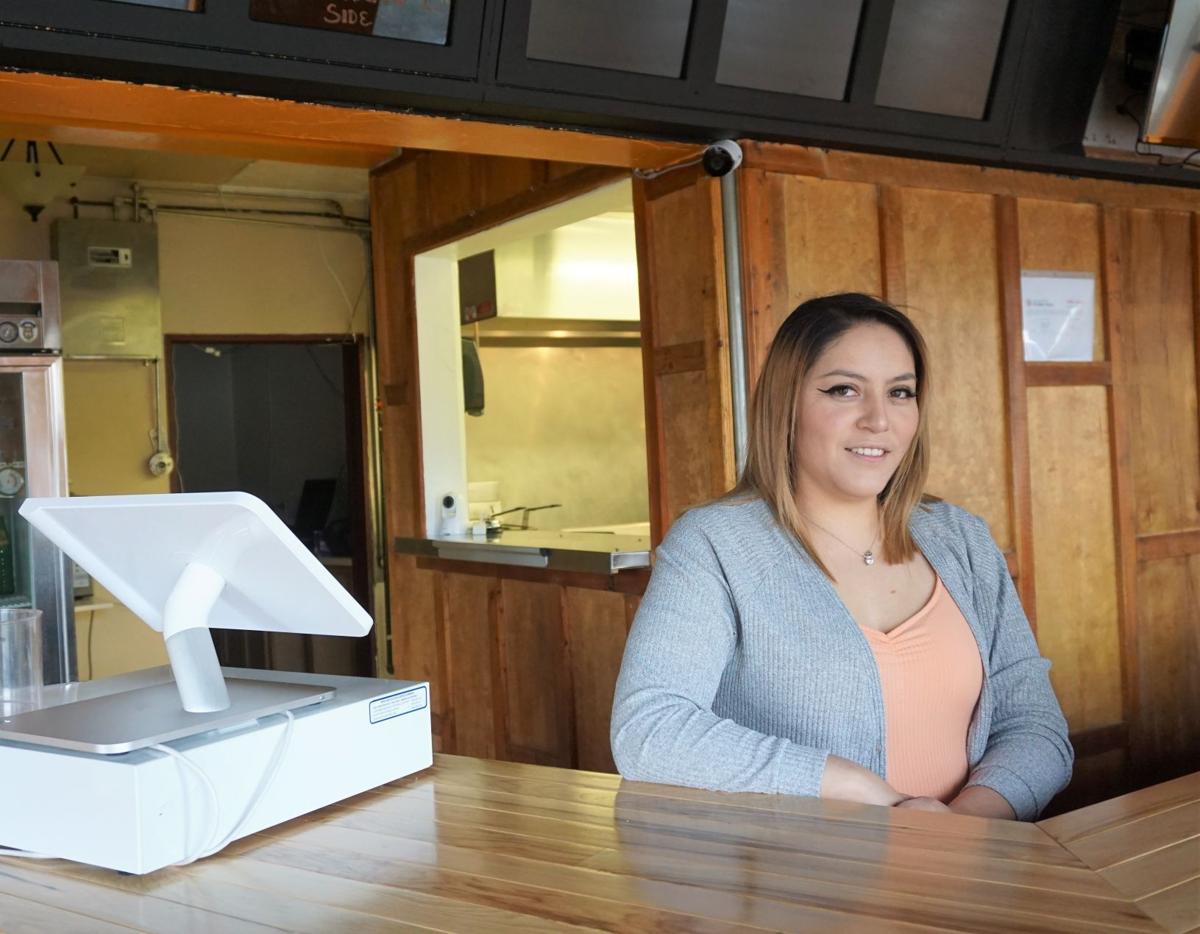 This spring, Noemy Martinez opened Valle del Sol in the same building where her parents ran Latino’s Delight almost two decades ago. Former patrons have delighted in seeing Noemy behind the counter again and seeing some of her mom’s specialties on the menu.

While it may seem like the global pandemic was the only thing people were talking about this year, Teton Valley saw plenty of news that was unrelated to COVID.

The following list is just a sampling of some of the broader themes that marked the year. Many of these stories will continue to impact our community in years to come.

All six projects funded by the school bond approved by voters in 2017 were wrapped up this year. Driggs and Victor each saw new elementary schools, while Rendezvous Upper Elementary, Tetonia Elementary, Teton Middle, and Teton High were renovated.

In a massive logistical undertaking, district staff, teachers, and volunteers orchestrated the move from the old elementary schools into the new ones in February.

The district’s administrative staff relocated to the old DES, and the district is in the process of selling its old office, tennis courts, and old VES in order to cover some of the construction overages and capital improvement projects.

Even with the lockdown that came early in the year and the strange challenges of running a store or restaurant during a pandemic, more than a few owners expanded, relocated, and even launched new businesses in the valley. Sips and Sweets, Valle del Sol, Idaho Food Shed, Pono’s Ono Sushi, Mountain Town Car Wash, Highpoint Cider, and Tribe Artist Collective were a few of the new businesses to pop up in the valley in 2020. The southernmost and northernmost gas stations in the county, Victor Gateway Station and Grand View General Store, both added new pumps and bigger parking lots. Many businesses moved, often in search of bigger spaces as their operations grew; Summit School of the Arts, Sego Ski Co, Fitzgerald’s Bicycles, Teton River Supply, Naughty Fruit, Barefoot Pilates & Fitness, Fisher Creative, 460 Bread, and 22 Designs all found new homes in the past year.

The boom is back

Instead of halting the real estate market, the pandemic somehow supercharged it, and agents, buyers, and sellers all took note that this year may have been the busiest ever for property transactions in Teton Valley.

Not only that, but 2020 also saw the resurgence of long-paused subdivisions and planned unit developments, including some with checkered pasts such as River Rim Ranch and Teton Creek Resort. New developers have brought forward applications for large subdivisions across the valley.

This all happened in tandem with continued work on new versions of the Victor Comprehensive and Transportation Plan, Driggs Comprehensive Plan, and Teton County Land Development Code, of which only the Driggs plan has been adopted so far.

The growing housing crisis in Teton County hit a new peak in June when the nine families residing in the Rocking H Mobile Home Park on Highway 31 in Victor received 90-day eviction notices. The tenants, many of whom owned their homes, were being told to leave so that Teton Valley Resort could expand its RV park onto the adjacent property. Members of the community, local nonprofits, and regional organizations rallied to their aid, helping pay for moving expenses, lobbying the city for assistance, and providing legal support. Most of the residents were able to eventually find housing elsewhere, but the housing search continues valley-wide for people who have recently moved here or lost their rentals to real estate transactions.

Meanwhile, the newly-formed Teton County Joint Housing Authority spent the year brokering a low income housing tax credit project with the help of the City of Driggs and the Driggs Urban Renewal Agency. The proposed 34-unit apartment building next to the courthouse was approved for the tax credit in late November and could be accepting tenants by fall of 2022. The housing authority is now tackling a master development plan to present to other local governments in hopes of encouraging more land donations and partnerships.

All eyes on Grand Targhee expansion

Grand Targhee Resort, a mighty economic and recreational force just over the state line from Teton County, Idaho, is working with the Caribou-Targhee National Forest on an Environmental Impact Statement, a document required for large projects on public land by the National Environmental Policy Act.

The resort’s master development plan includes the addition of around 1,200 acres on the south and west side of the resort’s 2,500-acre special permit area, as well as restaurants on the summit of Fred’s Mountain and at the top of the Sacajawea lift, new lifts, more summer trails, and road improvements, to name just a few proposals. This comes in tandem with the resort’s already-approved residential and commercial development planned for the private land around the base area.

An interdisciplinary team is examining the possible impacts of the proposals to wildlife, viewsheds, and natural resources, as well as on infrastructure, housing, and the economy in the adjacent community.

In the scoping period that ended in October, nearly 400 comments were submitted by organizations and members of the public. The Teton Board of County Commissioners requested and was granted cooperating agency status to ensure the Idaho county has a seat at the table during discussions. As the EIS process continues through the next year, the Teton Valley News will cover it.

Even as the country’s attention was focused on the mounting death toll from COVID, Teton Valley was the scene of several accidents that robbed the community of beloved people.

Victor resident and professional backcountry rider Rob Kincaid, 46, died after he was caught in an avalanche in the Palisades range on April 3. Rob was a professional hill climb competitor in the Rocky Mountain Snowmobile Hillclimb Association circuit and a professional backcountry rider for Team Arctic Cat who garnered countless honors and awards during his career. News of his death ripped through the community as friends, family, and fellow riders expressed disbelief and grief.

Tripp Edward Black, 11, an adventurous, fun-loving, warm-hearted child, was in a tragic accident and died on May 26. Tripp loved riding his dirt bikes, going fishing and hunting and just being in the outdoors. Tripp enjoyed wrestling and football and had just completed fourth grade at Rendezvous Upper Elementary School in Driggs. At his celebration of life, attendees were encouraged to wear camo, his favorite print.

On Sept. 2, Sara Madsen, 24, of Tetonia, was in a fatal car accident near Ashton. Born in Driggs, Sara grew up in the shadow of the Tetons with a lifelong love for the outdoors and the natural world. She was in her first year as a member of the Helena, Montana Hotshot Crew, having previously served two seasons with the Island Park, Idaho-based Centennial Type 2 Initial Attack Crew. When her supervisor heard the news, he pulled his crew off a fire so that they could attend the tribute to her life.

Wiley Olsen, 17, of Alta, died in a car accident on Sept. 12. A student at Jackson Hole High School, Wiley was remembered by his friends as a kind, generous person who valued people over things. The Jackson Hole News & Guide reported that people driving past the crash site on Highway 22 that week noticed groups of teenagers clustered with their friends, building memorials to Wiley and processing their grief.