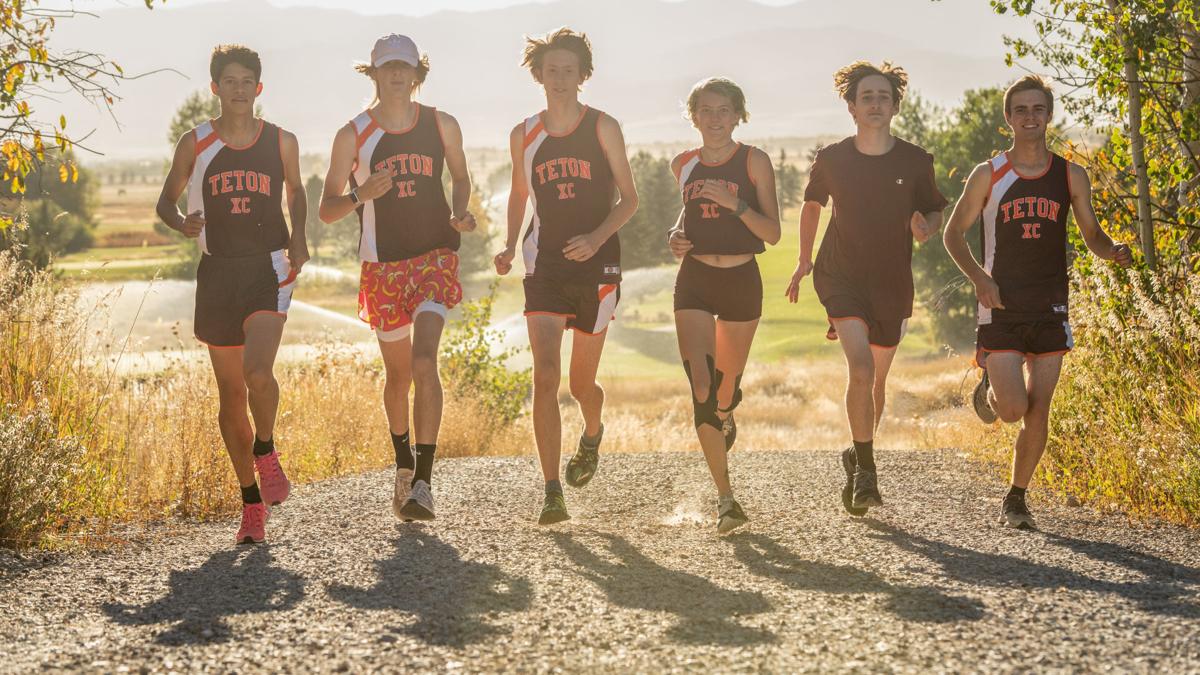 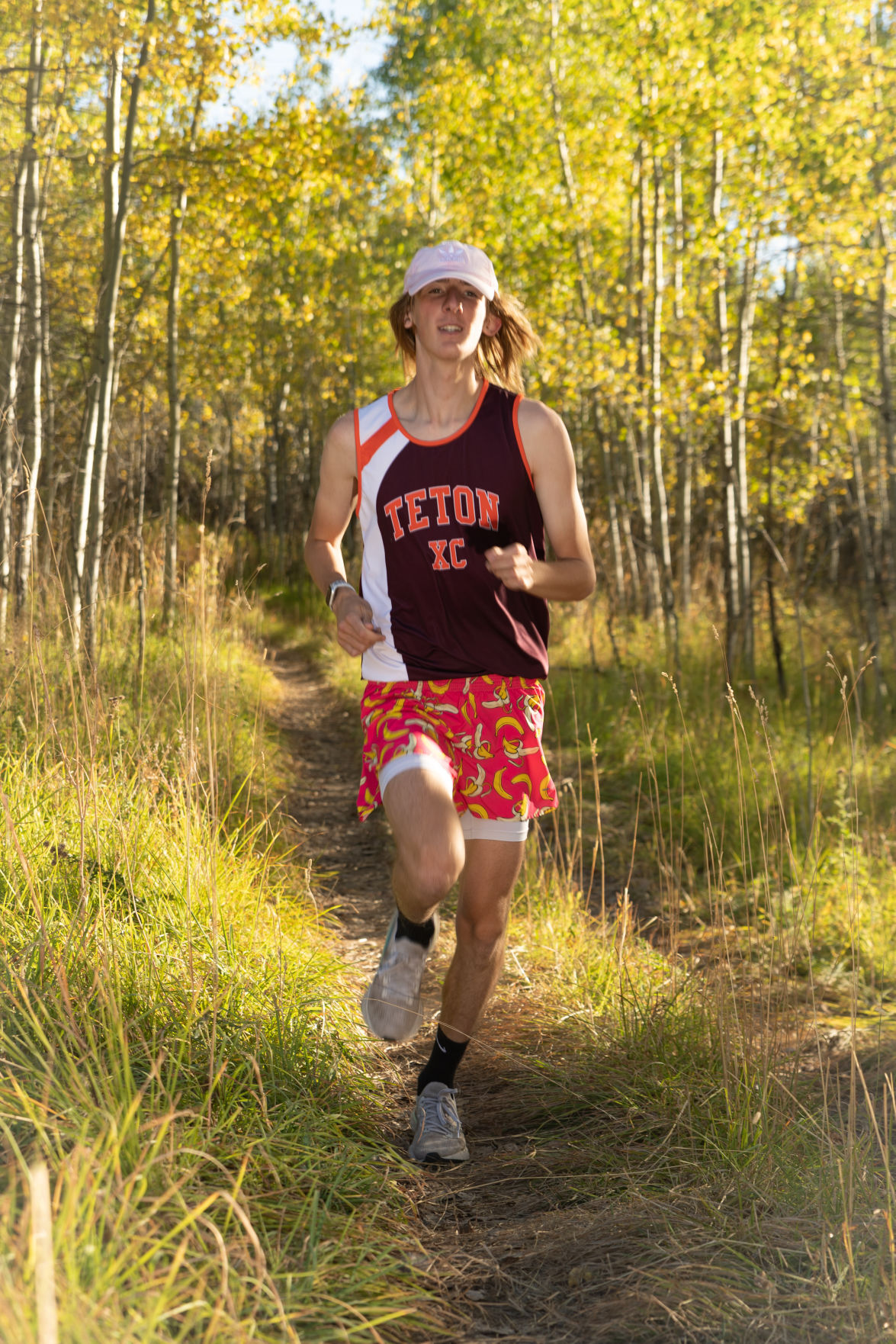 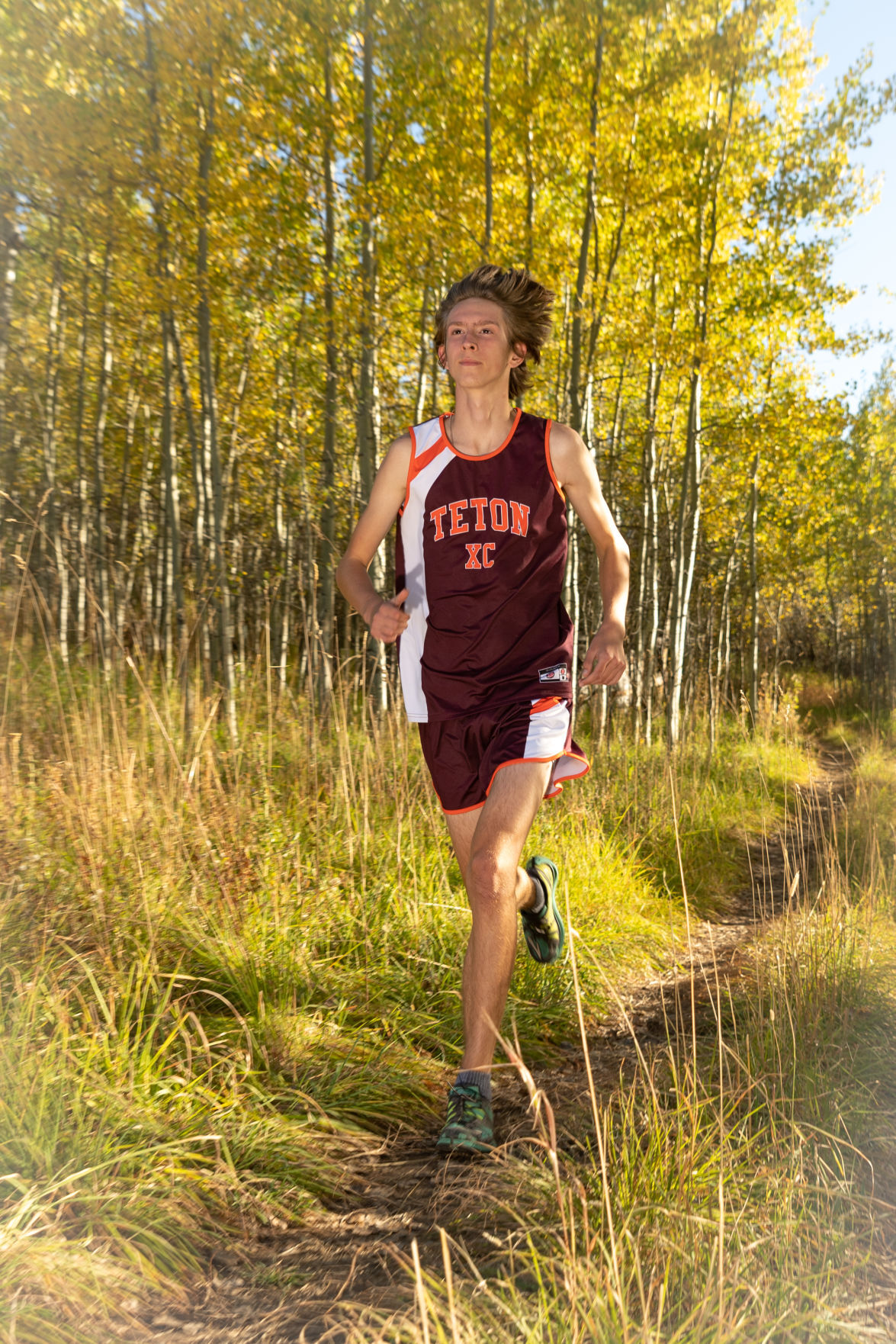 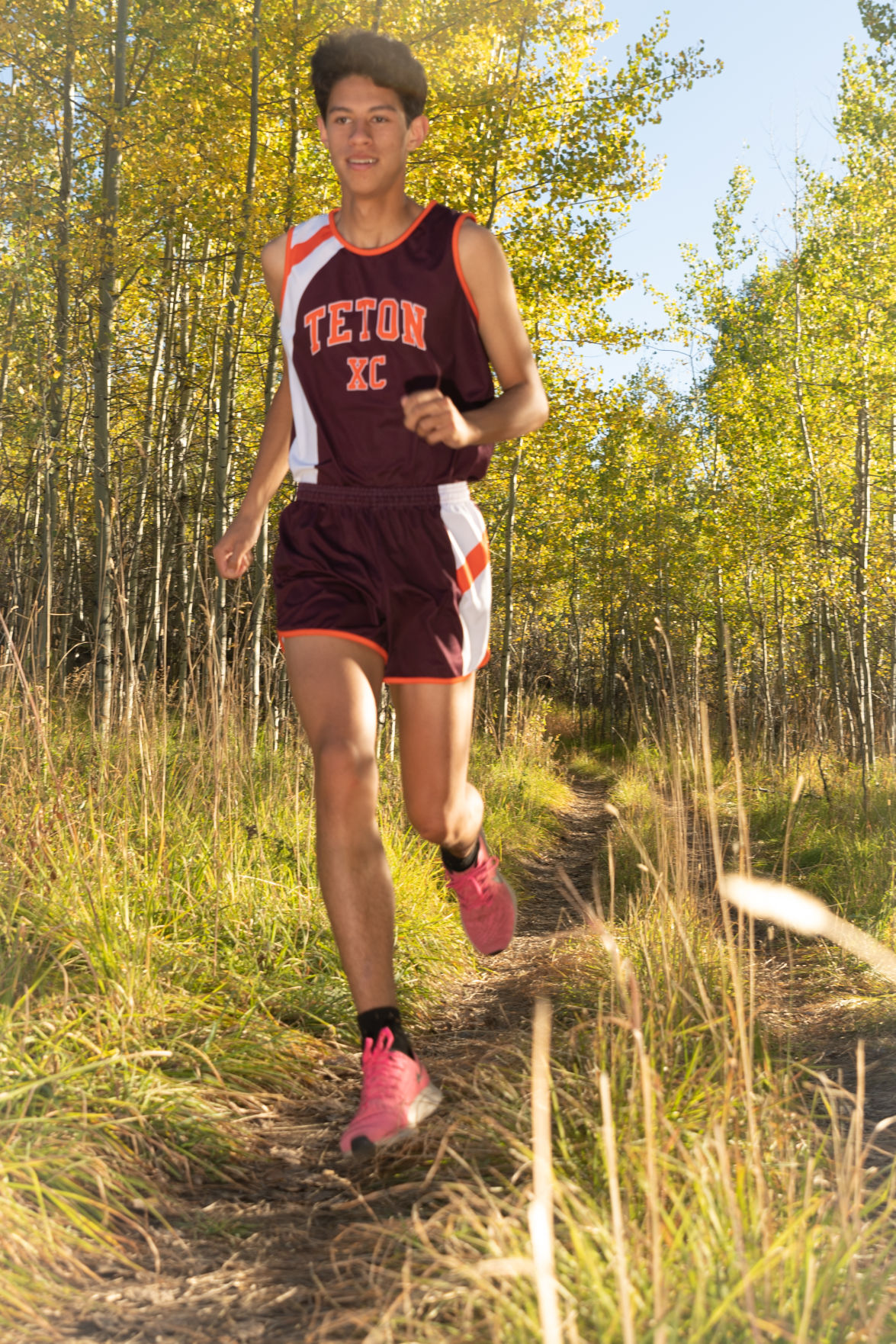 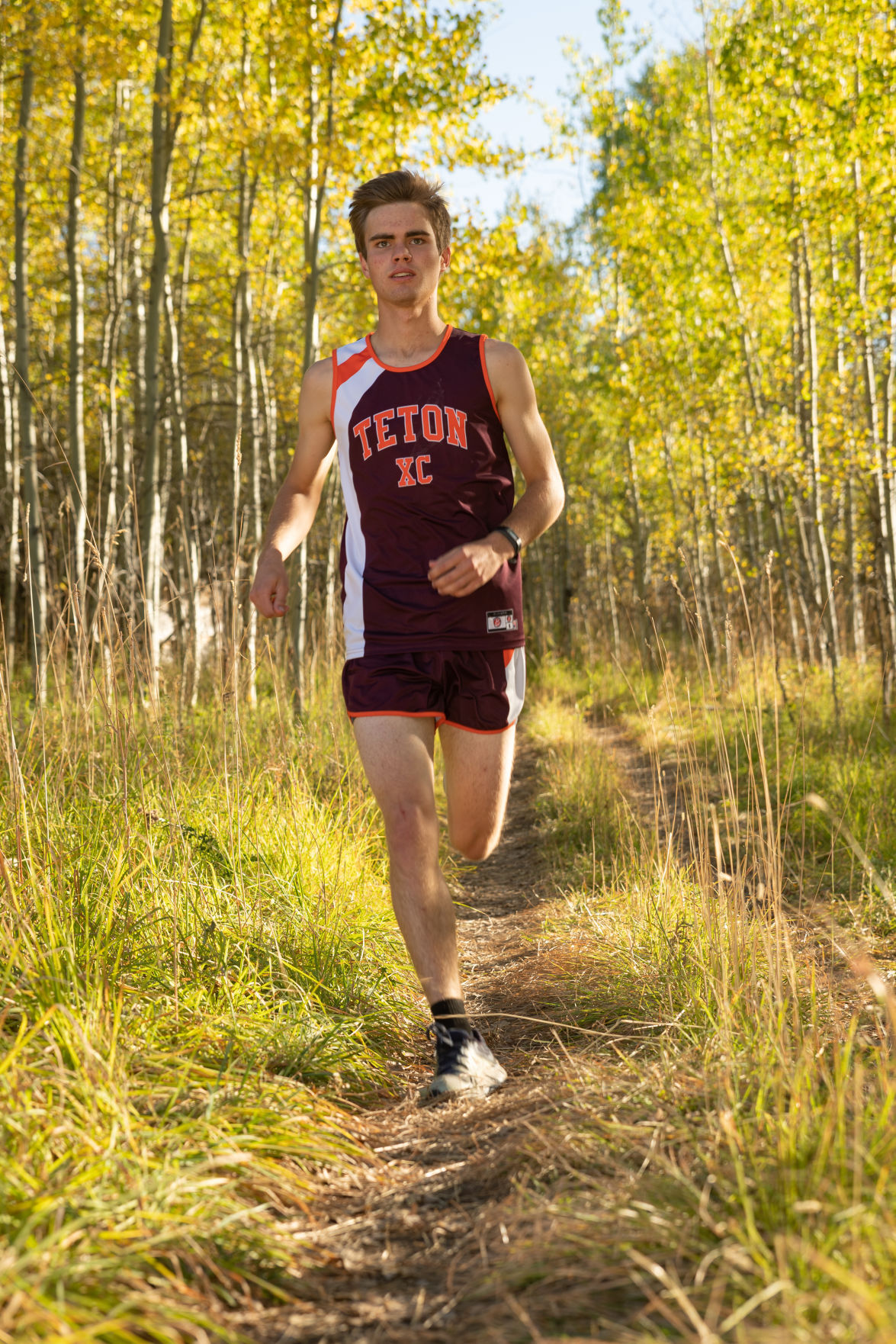 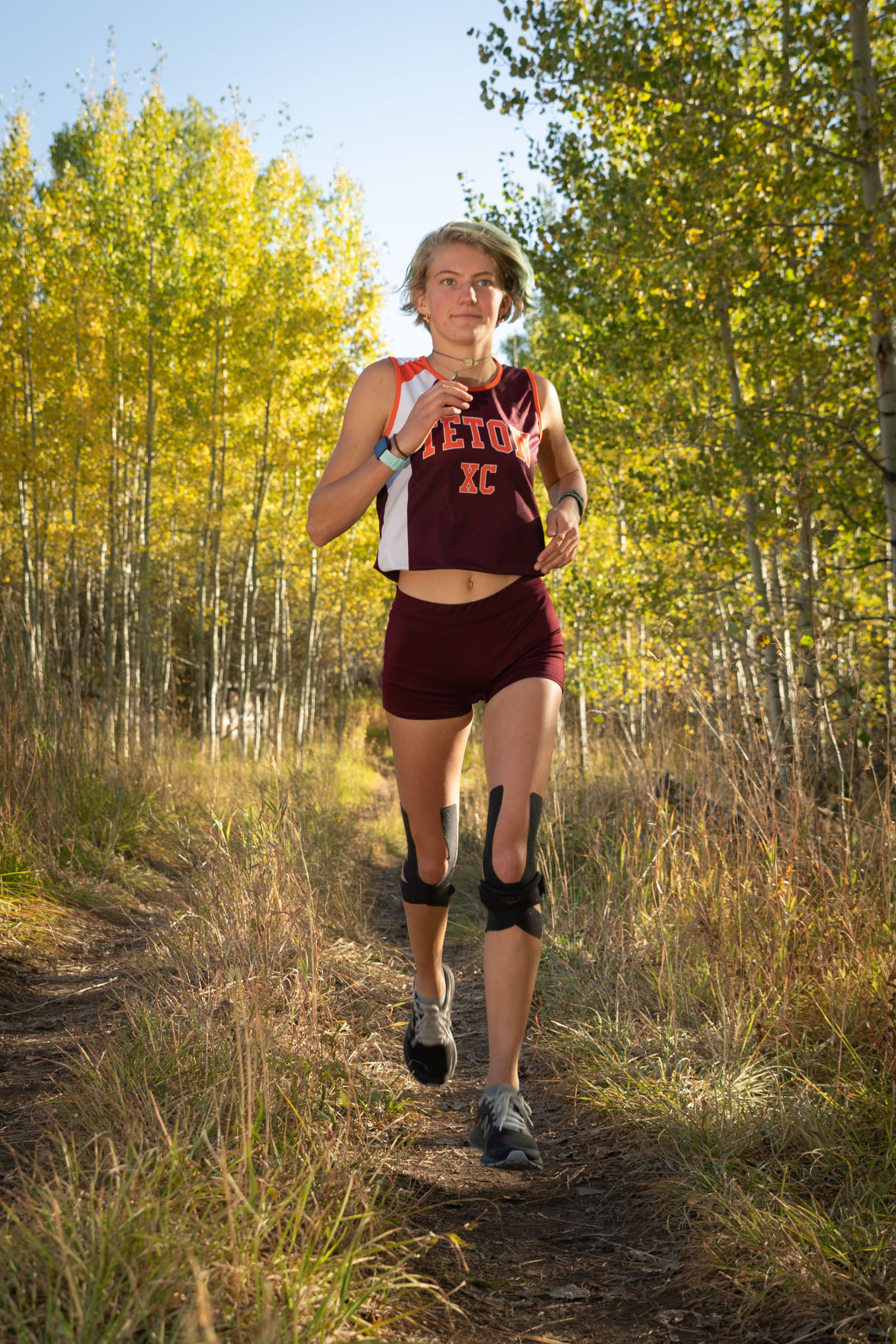 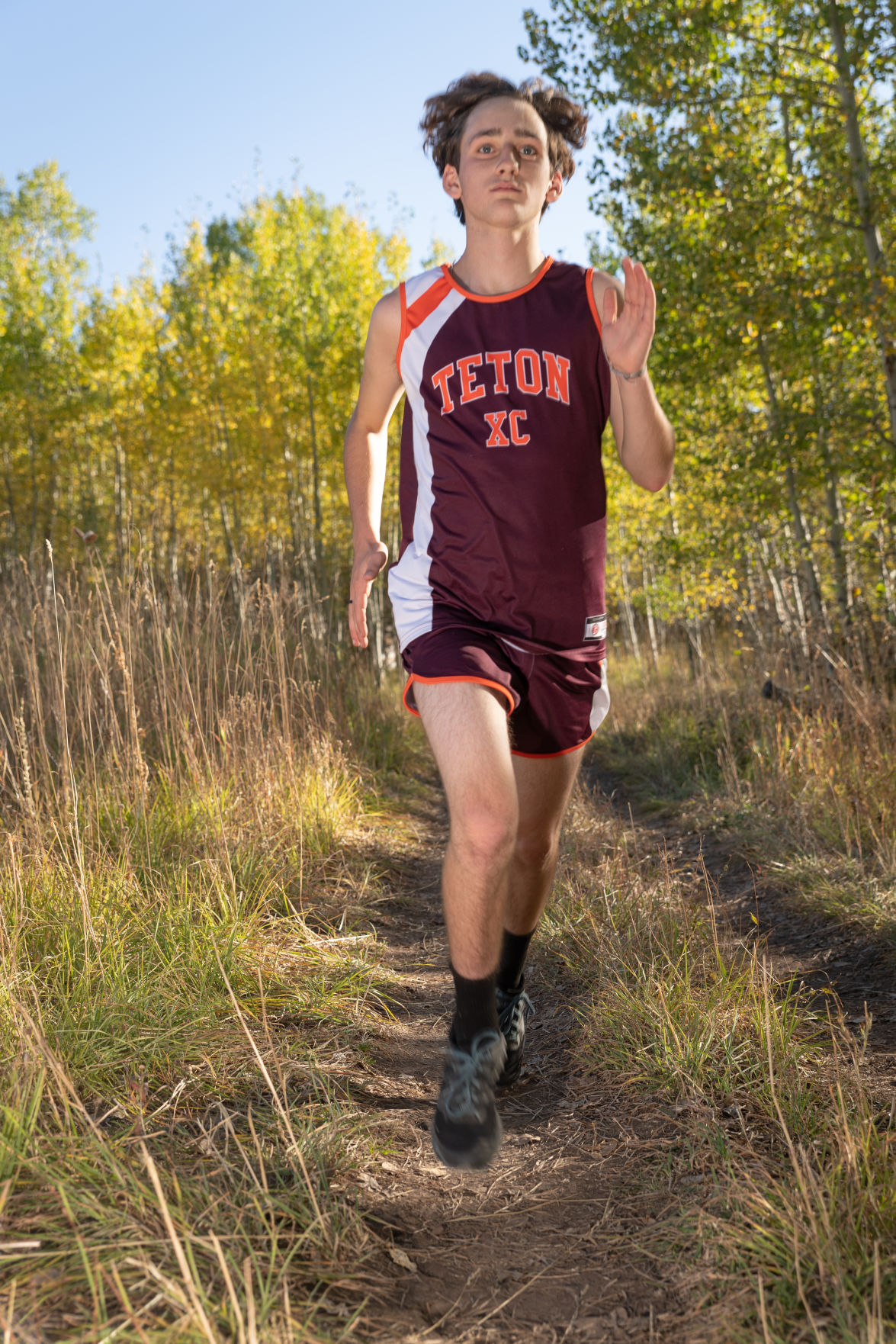 Water poured off the edge of the basalt cliff and plunged 400 feet into the Snake River Canyon where cottonwoods and poplars are turning orange and yellow. I think Autumn. This is cross country season.

The Wolves dropped 3000 feet in elevation to the Snake River Canyon in Twin Falls, just beneath the iconic Perrine Bridge. The Canyon Springs Golf Course is a stunning setting any time of year but with this light and a warm breeze… ahh!

If you read this piece regularly, you’re right to wonder what the course was like. How did it compare to last week’s tabletop run through farm fields in Jackson? ‘We’re not in Wydaho any longer, Dorothy.’

The course rolls mildly for the first third and the last third. Constant sidehill distracts with, always, one uphill foot striking higher than the other. That would be enough distraction but that middle section begins with a long descent, steep in places followed by a long grinder uphill that tests the resolve of the toughest harriers.

Add the heat of the Snake River Valley. Teton athletes were promised a pure test in the sun. This was a different game than the previous week in the cool, damp of western Wyoming. It was also a meet with a depth of 3A competition. Schools from across the Snake River Plain showed up to rumble including Buhl, Filer, Gooding, Kimberley, and Parma as well as perennial powerhouse, Sugar Salem.

Freshman athletes were separated out to race amongst themselves. Teton fielded 2 young Lobos in the women’s race--only one was prepared to solo the entire distance. Taylor Amey, a statuesque transfer from central Oregon drummed out her strides like some intelligent robot who had just figured out what she had been manufactured to accomplish.

We had not seen that focus in her eyes before. She found her meaning in the early stages of that 5k race. She found joy in the competition, running them down and repeatedly reeling in new quarries. In the span of less than 26 minutes, Taylor discovered purpose in motion.

The freshmen male Lobos raced with great separation and suffered the tough venue, learning, in the process, that courses are seldom democratic and often dictatorial. Each course is infinitely varied and many will punish and be indifferent to one’s attempts to fight back. Gideon Wilson led this pack to the line in 20:48, his second best time of the season.

The women’s jv were paced by sophomore novice Catherine Torres who was the singular female harrier from Teton to pace a 5k PR--a personal record for that distance.

In the men’s jv event, Noah Machen went out ferociously but was side-swiped by an abdominal cramp. It was Cameron Edwards who came home at the front of the Teton Pack with a 26 second PR, a stunning improvement in light of the hills.

In the varsity women’s race, trust among teammates is beginning to reap rewards. The sisterhood is trimming the gap between the top five to 2 minutes. The challenge remains to place 7 women on the line, all hungry and race ready at the same time.

Four minutes and 4 seconds excised from any varsity team in one week makes for a stronger team. In an age where young women may find themselves pitted against each other in school and on social media, these young adults stepped into leadership roles and have found that success in the pack means shared success for all.

The alpha males strided to the line with determination. True to form, Lance Safiran paced his team early in the drama. James Allen and CG Woiwode kept close contact while the next 4 rode further back in the train. Contact was never severed between the front 3 and soon their sequence began to scramble. James, then CG took the lead but Lance remained as close to them as they had been to him in the early parts. These 3 would cross the line within 6 seconds of each other, the best outcome for our leaders in years.

It can be a tough concept to digest, that a rising team tide raises all boats. Lance finished 1st man at the previous race. It has been a challenge for him to feel ascendant when he is passed by a teammate. Yet when I pressed him on the experience of being in a tight 3-pack, he waxed ebullient.

“That was so great. Those guys were there pushing me the whole way. We were pushing each other…”

Meanwhile, Brennan Bates was pursuing John Woiwode who finished a mere 7 seconds before Brennan. CG, Lance, Brennan and Ben Adams all peeled time off their previous best races. It was enough to put Teton ahead of all 3A schools except Sugar.

Cross fans get more exercise than fans of any other sport, bar none. But don’t take my word for it. Clear your calendar and pack your sneaks.

The biggest outing prior to District will take place Thursday, October 8th. The Bob Conley is located at the scenic Portneuf Wellness Complex in north Pocatello. This is the site of more Teton PRs than any other venue.

The Timberwolves are licking their chops to get another go at 3A competition on this finely crafted venue that is spectator friendly. Steal a day and drive out to see the Wolves digest protein from small schools in eastern Idaho. The women’s jv event is the first race with a gun time of 10AM. As always, results and details can be found at athletic.net