Monse Gomez gets elevated by her teammates. Coach Molley Alles says she’s encouraged by this season and excited about next year. 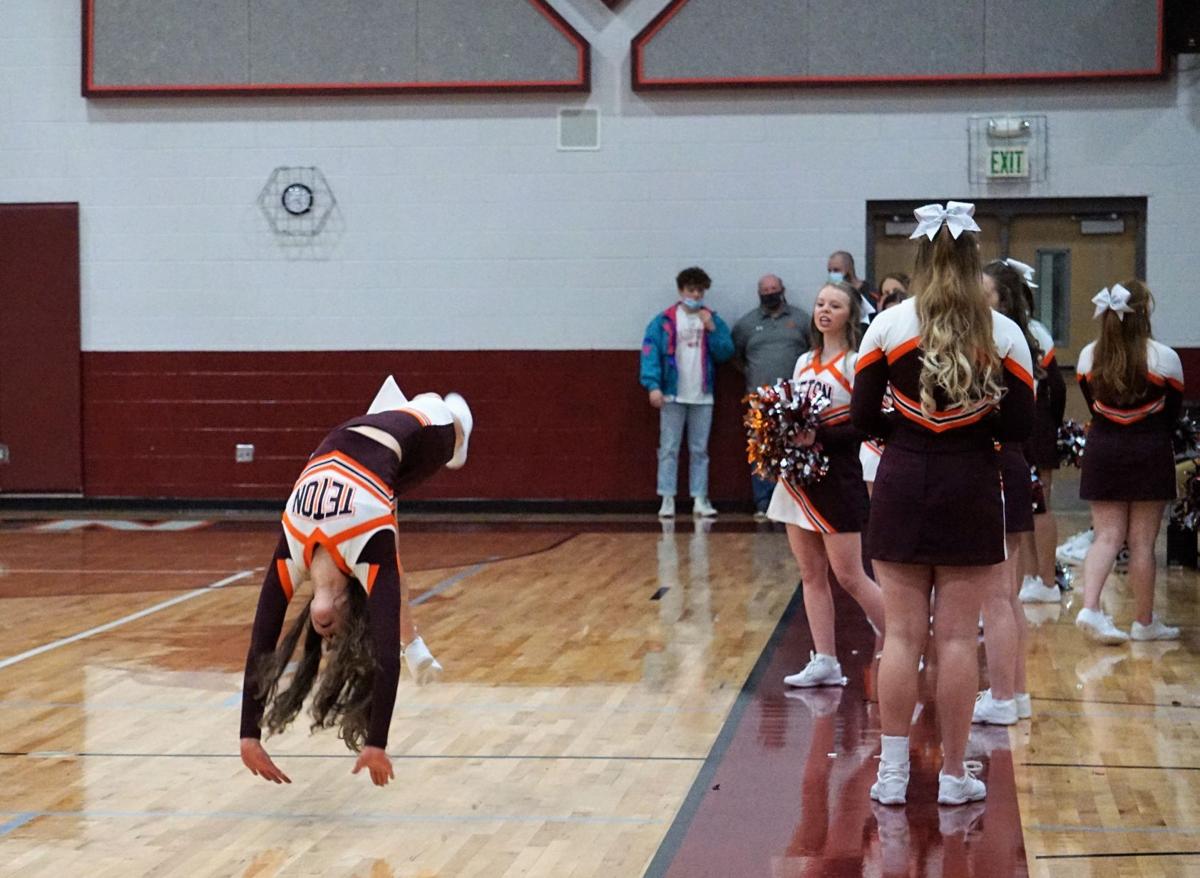 Sierra Hanamaikai impresses with a flip on the sidelines of a Teton High basketball game in February.

Monse Gomez gets elevated by her teammates. Coach Molley Alles says she’s encouraged by this season and excited about next year.

Sierra Hanamaikai impresses with a flip on the sidelines of a Teton High basketball game in February.

“Despite all the odds stacked against us, I’d say we worked on building a positive environment with consistency, and we had a great time,” she said.

While the fall sports season was relatively normal, the squad wasn’t able to cheer at home basketball games until January, when the governor loosened restrictions on indoor sports gatherings. That didn’t stop the girls from training and practicing for games and competition.

“Cheer is so different from when I grew up,” Alles said. “Then it was just a spirit squad, but now, people don’t always realize, it’s so much more than spirit—they have a competition season equal to any other sports. The squad is very busy and underappreciated in my mind.”

Cheerleading is a big commitment, she added. The team members need to maintain their grades and practice at 6 a.m., the only time when gym space is available.

While the squad did not qualify for the state competition in mid-March, the girls did attend the boys’ basketball state tournament to cheer on the Timberwolves to a third-place finish.

“That really ended the season on a high note,” Alles said. “There was a lot of good energy this season, and it was fun to cheer for a winning team, and people were happy to be able to attend games. It was a positive, exciting experience.”

The squad is graduating three seniors: Shea Smith, Megan Daley, and Vianney Blanco. To build the squad for next year (the ten-member team is dwarfed by some other squads in the area), the girls will soon be performing at the middle school to get rising ninth graders interested in cheer; they’ll hold try-outs in May, then attend camps this summer. Teton is looking for an assistant cheer coach to help with tumbling and stunting next school year.

“We’re hoping to build foundational skills at camp and have some routines choreographed,” Alles said. “The big focus for next year will be involving spectators and really getting the crowd going.”