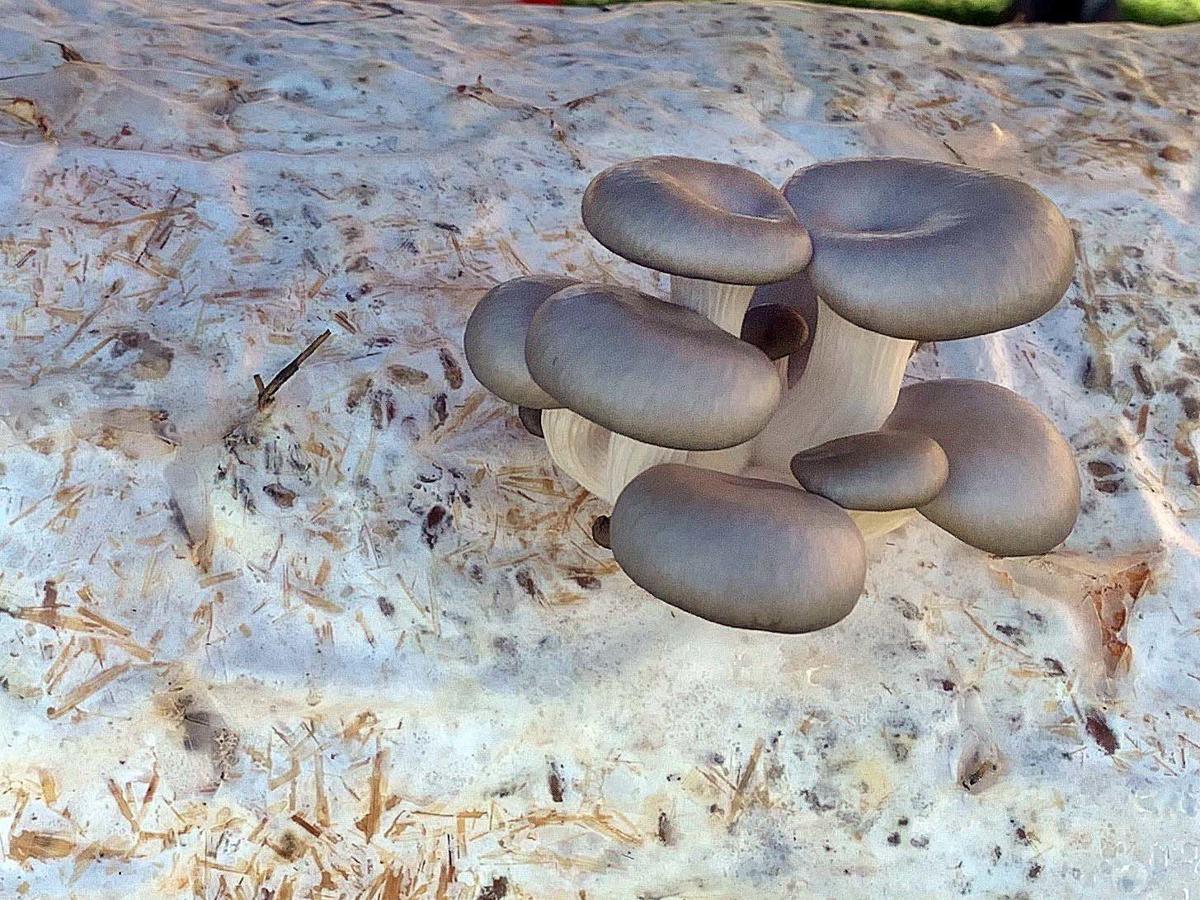 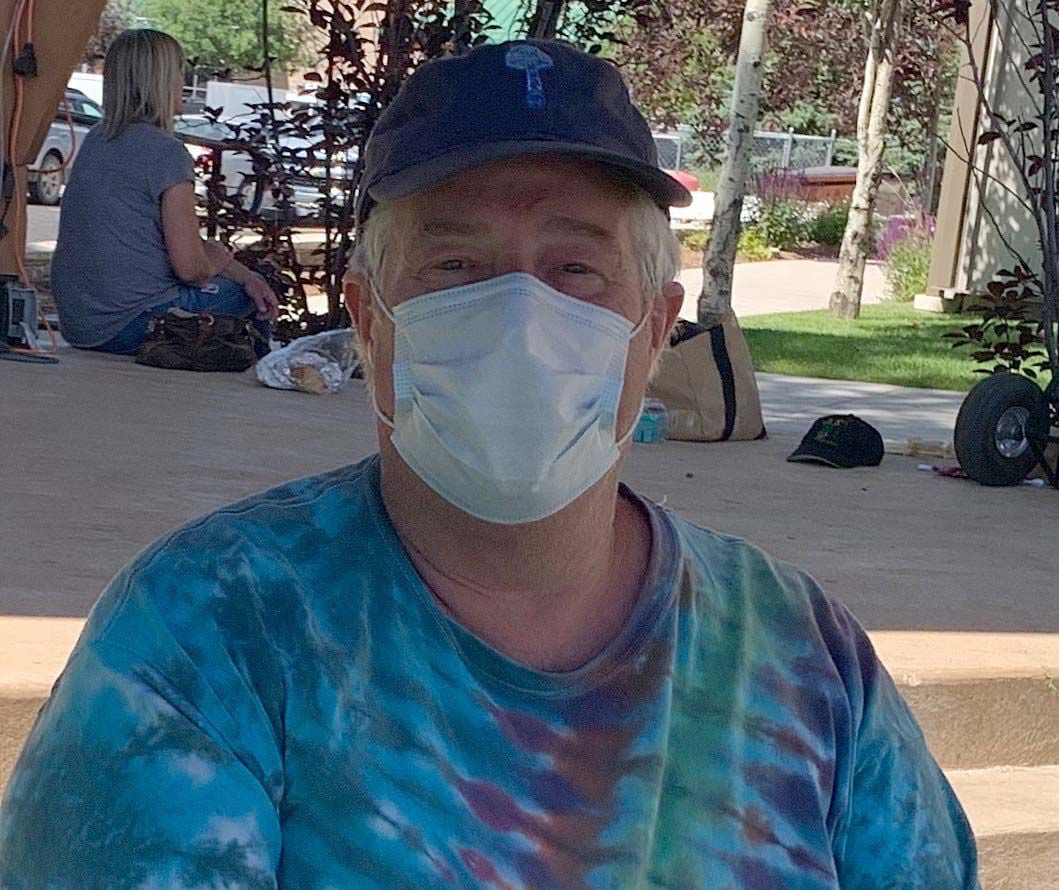 I’d spoken with Tye Tilt last week about the possibility of an interview today. “Did you know I was the first Market Manager?” he asked before he said smiling, “Sure!”

I smiled in return, knowing there were two stories here...

Mid-Market morning this week, I went to Tye’s booth where he was sitting on a cooler of his rapidly vanishing mushrooms for sale today. “This a good time?” I queried?

“Absolutely!” he replied as he slid over on the cooler to give me room to perch during our interview. “What would you like to know?”

“Tell me what you remember about the beginnings of our swell Market,” I replied.

“My first memories date back to the early 1990s. Jed of Cosmic Apple was leasing Steve Liebler’s farm, the Painted Apple, in Victor near where Trail Creek crosses Idaho SH 33 south of town. Jed would sell his produce under the name of Cosmic Apple from his VW Westphalia minibus he parked outside Barrels and Bins. About that same time, Mark Kessler started the first CSA in Drictor.

“Several years later, Georgie Stanley, Janet Reese, myself, and a couple of others held the first Teton Valley Farmer’s Market in Driggs at the pagoda outside the K Dunn building and near the old bowling alley. The following year, we moved down to where Fred Mugler’s Mountaineer Outfitters had burned down, the space now occupied by Mugler Plaza. That was before the Coulter building was built, so there was ample room for us. We were there for two years before moving to the City Plaza where we’ve been ever since.

“I’d agreed to be the first Market Manager. That was probably 2004-2005. We had five or six vendors, so we set up along the sidewalk to attract customers. It’s like a circus, you know: no one thinks of dropping by until the space is filled with tents! I recall some ‘lively’ discussions we had about whether or not we should have artisans also present. Since we were still so small — and there were so many artisans — we felt they would have overshadowed the farmers. Since we wanted to be a Farmer’s Market, we opted for farmers only. As the Market grew, we felt we could take in some artists. We thought everyone would benefit from the diversity. And, they were all locals, as they are today.

“In the beginning, our Markets were held on Thursdays as the majority of our vendors attended the popular Saturday Farmer’s Market in Jackson and felt they needed the day in between to get ready. Eventually, our Market day was moved to Friday mornings to catch visitors to the Valley as well as the locals.”

“Quite a history!” I told him. “Now, Tye, please tell me how you got into mushrooms.”

“I bought my house west of Driggs in 2000. I was tired of working four or five jobs a year, and I wanted to focus on growing food. I knew my new spot would be good for that. But I didn’t want to compete with the other local farmers.

“However, those plans changed when I met Scott Button who’d grown mushrooms with Jed on the old Painted Apple Farm. Scott had just had knee surgery and was trying to recuperate in his cabin on Rammel Mountain Road near Badger Creek, but he had no running water or power. So he asked if he could spend a couple of weeks with me. ‘Sure,’ I replied.

“Well, after three months with him on my couch, and both of us talking mushrooms, we decided to go into business together building a mushroom ‘farm’. It took ten years to ‘grow’ the farm to where we were harvesting about 150 pounds of mushrooms a week during the summer. We were also growing all year long in the reefer trailer, an old Meadowgold dairy truck that’s still in service (producing mushrooms)! I remember the truck smelling like spilt milk for almost a year. We tried to do things simply, from the ground up so to speak, acquiring equipment wherever we could afford it. Neither one of us wanted to be paying off huge bank loans while we were enjoying life on the farm.

“By that time, we were doing three Farmer’s Markets a week, and supplying ten restaurants with mushrooms all year long. We also began a mushroom buyers’ club. Unfortunately, we had a fire in 2011 that burned up the production room where we’d built the steamer.

“Currently, we grow mushrooms in blocks we make from locally-sourced straw we chip. When we have a hundred pounds of chipped straw, we put it into a horse trough filled with water to soak for a day. Then, we drain the straw overnight before stuffing it into special bags we buy. The stuffed bags are then ‘cooked’ in steam at 200 degrees for ten to twelve hours to kill any mold or bacteria, and then are cooled overnight. The next day, we trickle the mushroom spawn (mycelium growing on organic rye) into the straw through the tops of the bags prior to sealing them closed. Then we move the blocks to the old milk truck where it takes another three to four weeks to incubate and fully colonize the blocks. From there, we move the blocks to our grow room we keep at 90% humidity and about 60-65 degrees Fahrenheit. We stab holes into the blocks with arrowheads, and the mushrooms push up through the holes

where they sense the oxygen, and then fruit up outside the bag. It’s those fruiting bodies we find so delicious! It only takes a couple of days for a ‘crop’ to appear, and in another couple of days, they’re ‘done’. We get three or four flushes of mushrooms from each 20-pound block.”

“I never knew what went into ‘making’ a mushroom,” I told Tye. I was duly impressed!

Today, Tye had brought pearl oyster mushrooms, and he’s hoping to bring some king oyster mushrooms in the near future. “They’re the big, meaty oyster mushrooms, some of which weigh almost a pound,” Tye told me. “Perhaps I might even have some Reishi mushrooms (Chinese mushrooms) later this season,” he went on. “Their taste is not the greatest, but they’re good for your immune system and your lungs. Could be helpful this year!”

“Do you grow any other varieties?” I asked.

“Well, there are patches of chanterelles all over the national forests, but they need rain. The end of June was nice and wet which is great for them, and they were coming along nicely. But with the dry July we’ve had so far, they’re shriveling. Maybe next year. It’s often one year in every ten for chanterelles here in the Valley.”

Thank you, Tye! You can find Tye’s and Scott’s Mountain Valley Mushrooms every Friday here at the Farmer’s Market through October 2nd.