Last week the nonprofit organization Valley Advocates for Responsible Development submitted a petition seeking judicial review of a controversial decision made by the Victor City Council in May.

On May 22, the Victor City Council considered a rezone from RS-7 to RS-3 for 16 acres on the northwest side of Victor, which would allow the use of the cottage court building type on that property. The developer, Jonathan Fenn, is proposing over ten residential clusters, each made up of six to eight cottages, as well as a hotel and possibly storage units.

Members of the public came out in force to voice their opposition to the project. Two residents started a petition calling for the deannexation of the land from the city. VARD presented correspondence between the city attorney, the planner, and the developer and his team as proof that the city had given the project preferential treatment by serving as the applicant. City planner Ryan Krueger explained that the city was the applicant because the planning department wanted to rectify miscommunication that had happened during the previous planner’s tenure.

Despite the opposition, the city council unanimously approved the rezone, stating that it was in accordance with the comprehensive plan and that the decision would afford the city significantly more control over the design and density of the development.

“As a city, we decided our best option for making sure that development fits the vision of our comprehensive plan was to rezone it,” wrote Councilwoman Molly Absolon in an editorial in the Teton Valley News last month.

“There is a real disconnect between what the city is saying and what the public wants,” said Anna Trentadue, the staff attorney for VARD. “I’ve seen this mentality with local elected leaders, that they feel like they know what’s best and they’re dismissive of the public. It’s a dangerous way of thinking.”

VARD requested an appeal of the council’s decision on June 5, which was the last day in the two-week time period after the meeting in which an appeal could be requested. Instead of holding an appeal hearing, the city denied the request. In city attorney Herb Heimerl’s letter of denial, he stated that VARD is not an affected party, that the application was incomplete, and that the request “did not identify specific deficiencies in the decision.”

“We would encourage anyone to reach out to us sooner in the process,” Krueger said on Friday. “Submitting an appeal three hours before the deadline doesn’t allow for the customer service we want to provide.”

Based on counsel from other planners and attorneys, VARD also did not pay the $1,205 appeal fee.

“The city wants to make sure due process rights aren’t abridged,” Heimerl told the Teton Valley News. “I’m perplexed as to why VARD hates this project so much.”

Trentadue in turn wondered, “When did the city decide that this project is a good thing? There seems to have been a dramatic change in tone from council in the last couple of months. I don’t understand what is desirable about this project.”

VARD filed its petition for judicial review the day before the 4th of July, writing that the council did not properly weigh the evidence in opposition, that the city demonstrated bias towards the developer, that the decision would have significant adverse impacts on surrounding property, and several other assertions.

View the entire document in PDF form, link to the right: 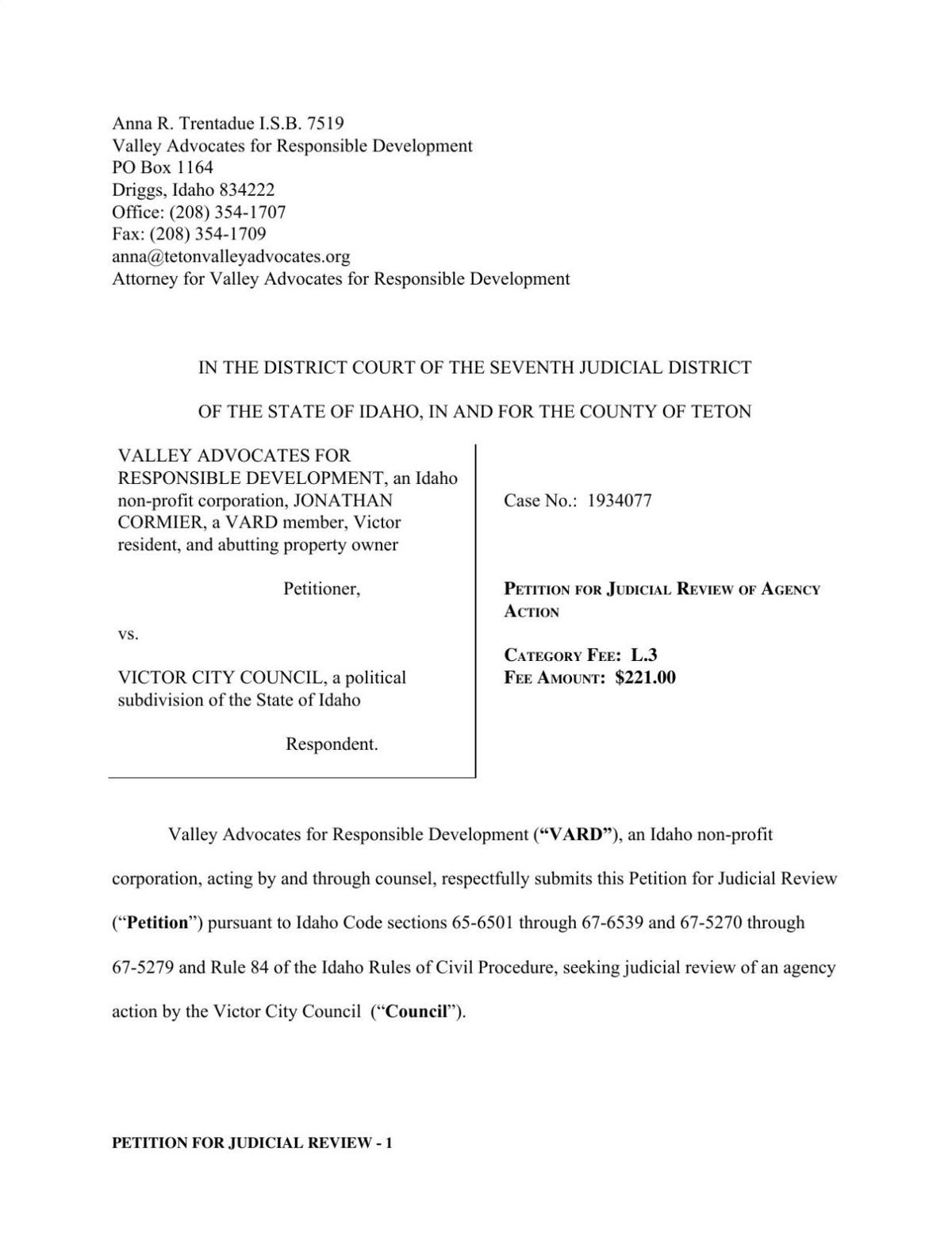 Now it’s the city’s responsibility to prepare the entire record of evidence, including all meeting transcripts, written correspondence, exhibits, petitions, memoranda, and staff reports. VARD has agreed to pay all fees for the preparation of those documents. Trentadue said that VARD hopes to maintain an open line of dialogue with the city through the process.

Trentadue compared the unfolding case to a Tetonia matter that was resolved in 2014 after a four-year legal battle. VARD represented Tetonia voters and were successful in reversing the annexation of a large area of wetlands into city limits.

VARD also supports the citizen petition for the deannexation of the properties in the northwest quadrant of Victor. Once the petitioners have gathered signatures from 20 percent of the electorate, the city council could consider voting to put the initiative on November’s ballot.

“We’d like to see the city honor the public’s wishes,” Trentadue said. “We don’t want to go to court.”