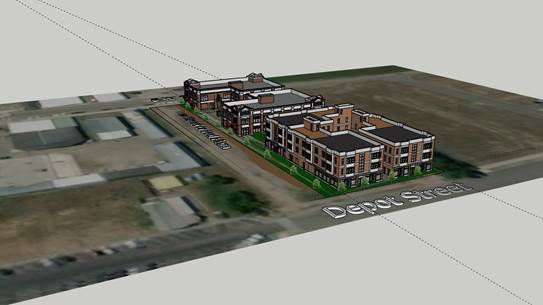 Housing authority commissioner Shawn Hill quickly drafted these renderings to present to the Driggs Urban Renewal Agency last Wednesday. The housing authority might pursue a low income housing tax credit on the city-owned property near the courthouse, if it can get the blessing of the city council and financial support from DURA. The application deadline is fast approaching, however. 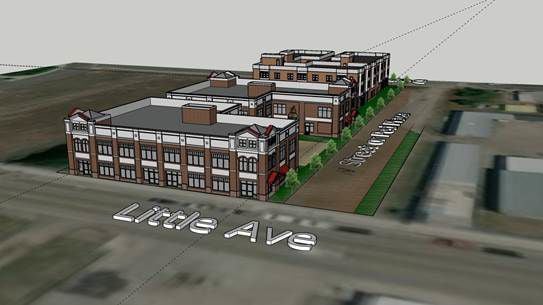 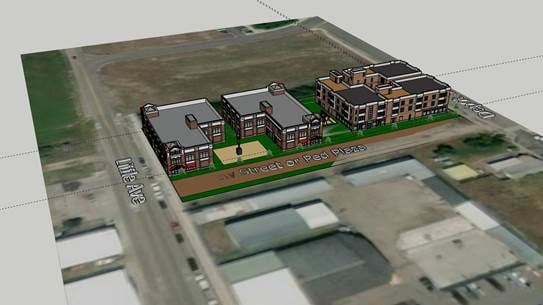 Housing authority commissioner Shawn Hill quickly drafted these renderings to present to the Driggs Urban Renewal Agency last Wednesday. The housing authority might pursue a low income housing tax credit on the city-owned property near the courthouse, if it can get the blessing of the city council and financial support from DURA. The application deadline is fast approaching, however.

A low income housing tax credit project is one of several strategies outlined in the 2019 Teton County Affordable Housing Strategic Plan. A LIHTC is a tax incentive for developers to build affordable rental housing, and the deadline is looming for this year’s application.

Representatives from The Housing Company, a nonprofit affordable rental housing organization based in Boise, have told the Teton County Housing Authority that Teton Valley is a good potential candidate for a LIHTC project.

“I do think your region...fits well within the framework of this year’s allocation plan,” said Housing Company development manager Blake Jumper at last week’s meeting.

The Idaho Housing and Finance Association administers the LIHTC. Last month Idaho Housing released its 2020 qualified allocation plan, which lays out the criteria for applications. Fox Creek Place, Teton View Village, and Teton Court Apartments are all LIHTC projects in Teton Valley. A future project would be between 30 and 40 units and income-restricted to an average of 60 percent of area median income. The Teton County AMI in 2018 was $68,000 for a household.

Because it has little in the way of assets, the housing authority needs a land donation or discount, and has been examining possible properties since the group’s inception last October. While city, county, or school district-owned land appeared to be a logical starting point for a LIHTC project, none of the properties that met the group’s criteria (at least three acres and within walking distance of amenities) were available.

The other obvious opportunity is with the Karl M. Johnson Foundation, the charitable Jackson-based organization that owns residential property next to the new Victor Elementary School, as well as the stalled Gemstone subdivision in Driggs, which was envisioned as an affordable housing development. Driggs community development director and housing authority secretary Doug Self has been in communication with the Karl Johnson Foundation for several years but the nonprofit has limited time and staff to commit to a Teton Valley project.

On May 6 when the members of the housing authority realized they needed to acquire or receive land within a month in order to get an appraisal, a market study, and a request for proposals in time for the September LIHTC application deadline, some commissioners proposed waiting for until next year’s cycle to present a fully fleshed-out project.

“I’d rather be well-prepared for next year than try to rush a project through,” said commission chair Carol Barker.

Commissioner Shawn Hill, however, urged the housing authority to “strike while the iron is hot,” and get the process underway. For months he has been trying to pressure the city, through Self, to offer up its newly acquired 1.5-acre property on West Little Avenue.

In December of 2019 Driggs purchased a rectangle of land near the courthouse from the Huntsman Family to realign and continue Front Street, which currently ends at Depot Street, all the way to West Little. The $325,000 for the purchase came from the city’s reserve fund and Self explained that the city does not intend to permanently hold the property; the plan is to split it up, make infrastructure improvements, and sell the lots to encourage more development in the Front Street area.

While Hill has continued to press for consideration of a land donation from Driggs to the housing authority, Self has said repeatedly that for the cost of that property, the city could provide a much larger lot elsewhere.

Hill once again pitched the Front Street property at last week’s housing authority meeting and this time Self and the other commissioners agreed to put out feelers on the idea.

Meeting attendee Peter Boogaard, who served as a member of the Affordable Housing Technical Advisory Group that preceded the housing authority, also recommended moving with speed, and not being lulled into complacency by the economic downturn. He reminded the group that the county’s first housing authority disbanded when the Great Recession hit.

“If we had done something then, we wouldn’t have the housing problems we have now,” Boogaard said. “There will be a need again someday. There’s still a need right now.”

Commissioner Erin Gaffney, who is also the administrator of the Driggs Urban Renewal Agency, suggested approaching that body for support.

In the six hours between the housing authority meeting and the DURA meeting, Hill mocked up a visual of possible apartments on the property, using the River Street Senior Community apartments in Hailey, Idaho, as a model. The River Street complex is a recently-completed LIHTC project with 30 units on less than an acre of land in Hailey’s downtown.

Self and Gaffney informed the DURA commissioners about the possible request: could the urban renewal agency help bankroll some part of the project, such as public infrastructure?

The suggestion was met with enthusiasm. DURA commissioner Erika Earles, who during her time as a city council member was a vocal advocate for affordable housing, said, “Wouldn’t providing housing and tons more people shopping downtown fit with our mission?”

Commissioner Brian McDermott did caution that DURA shouldn’t be the lead funding body for the project. He noted that there are many funding mechanisms for affordable housing at the state and federal level.

“We need to make sure we exhaust the other sources of funding first,” McDermott said. “Let’s see what the housing authority can put together first and maybe we jump in and fill gaps.”

Self confirmed that funding assistance from other local entities and grants would be necessary if the city donated part of the property, which could amount to over a $100,000 commitment. That kind of assistance would help the project by improving its ranking according to the LIHTC allocation plan.

The housing authority will present the project concept to the Driggs City Council at the council’s May 19 meeting.

“It’s an extremely tight timeline,” Self said about meeting the LIHTC application deadline. “Every step in the process would have to go perfectly, but it would be really exciting to see additional housing here for that AMI category.”

The Teton County Joint Housing Authority met for the first time on Dec. 4, bringing renewed enthusiasm and momentum to the conversation about …