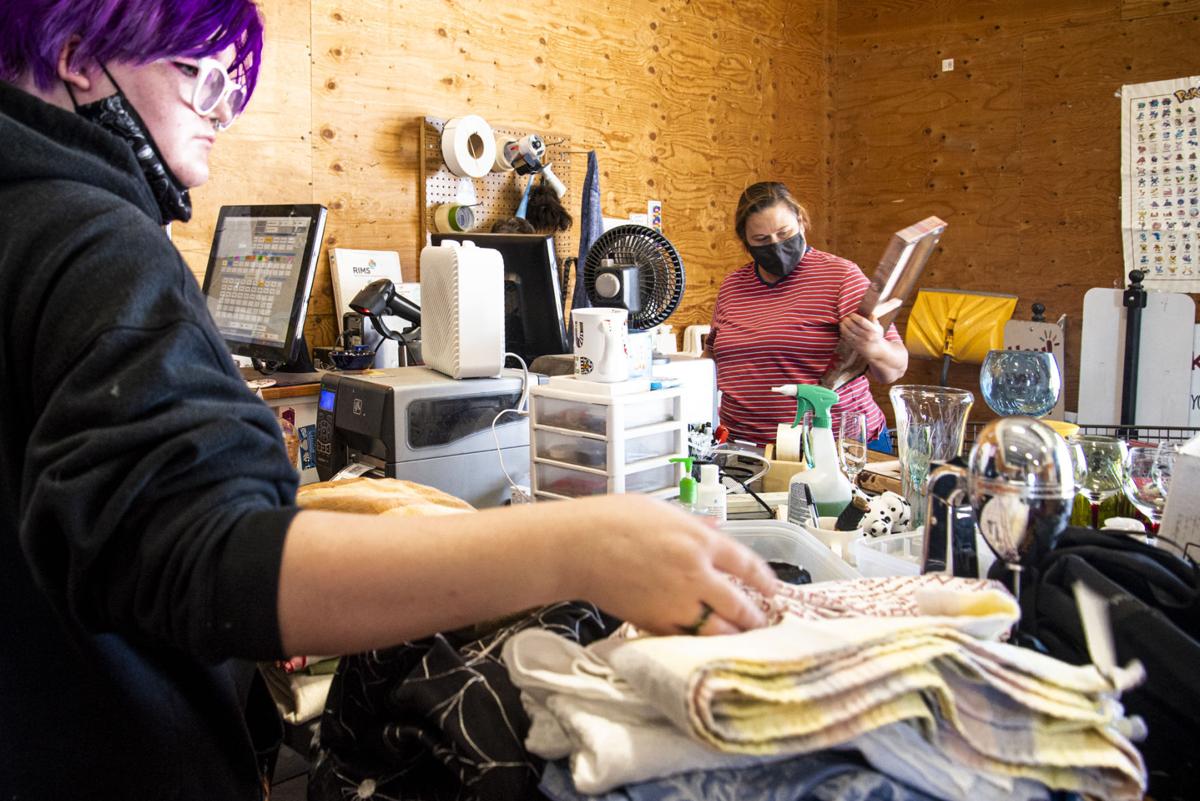 Sunshine Bryden, left, and Lori Ford, right, sort through donated items in the back of Idaho Youth Ranch in Nampa on Thursday. 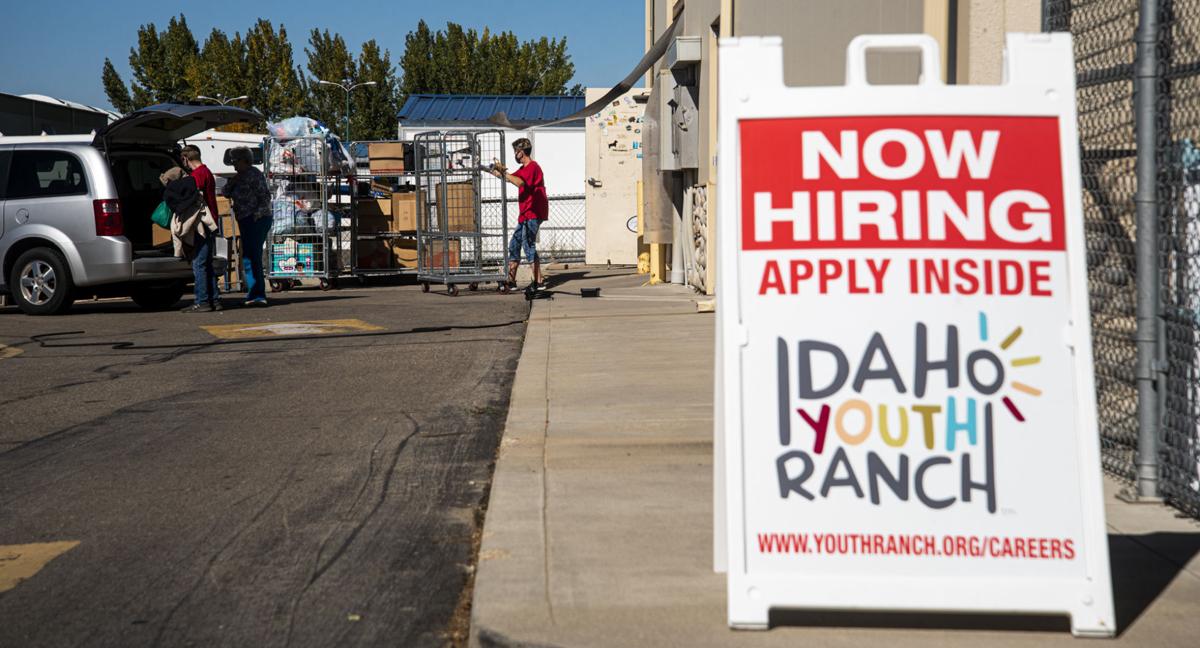 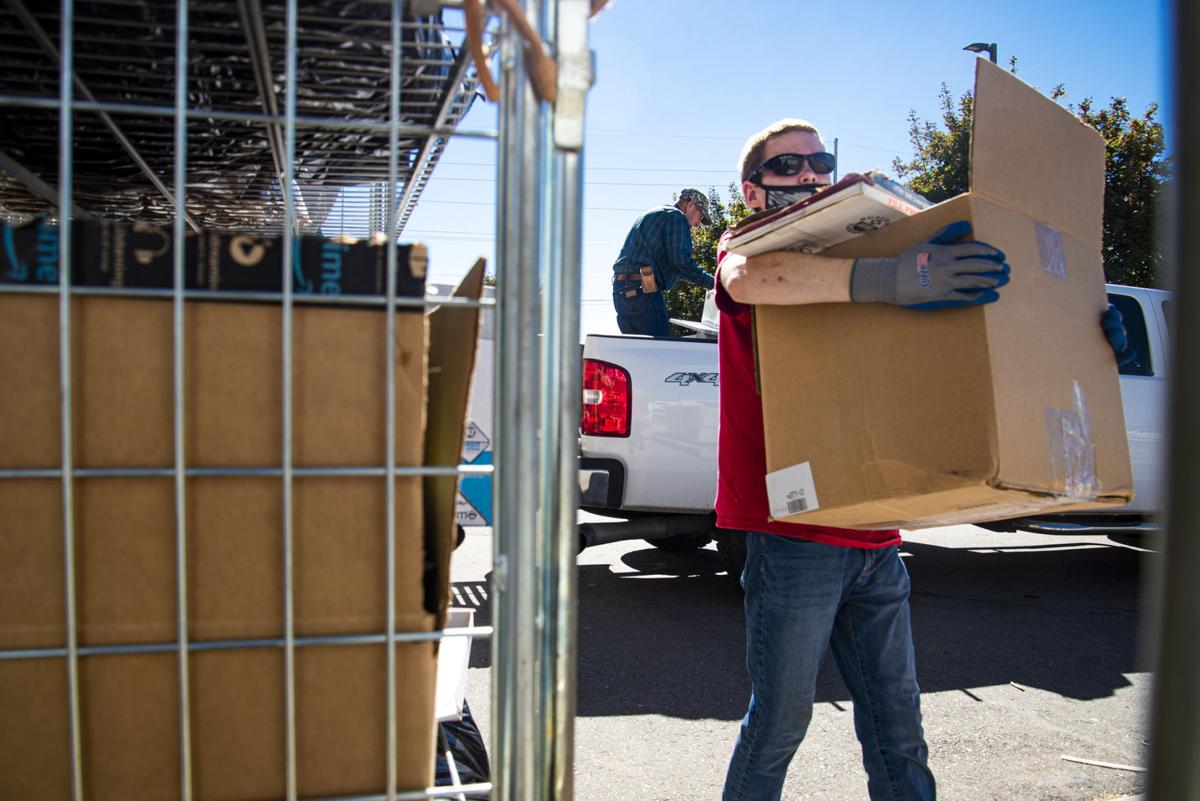 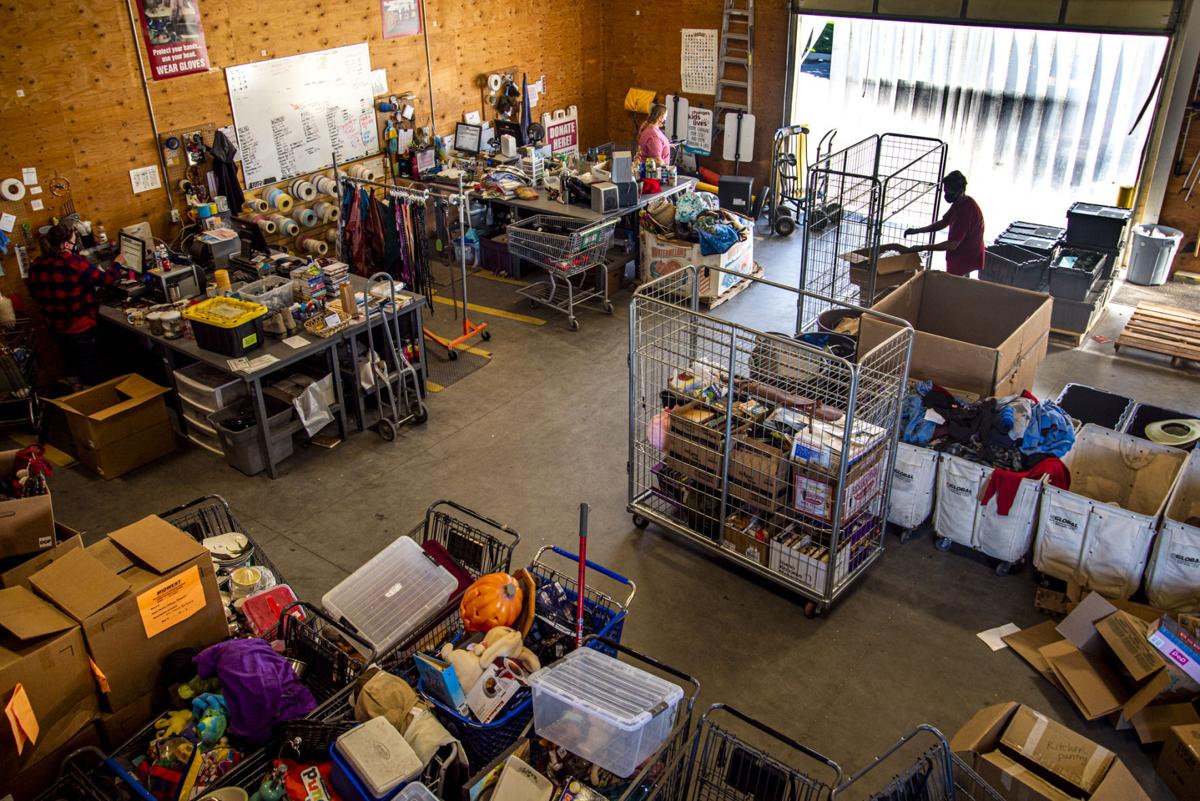 Staff at Idaho Youth Ranch in Nampa work in the back warehouse sorting through donated goods on Thursday. 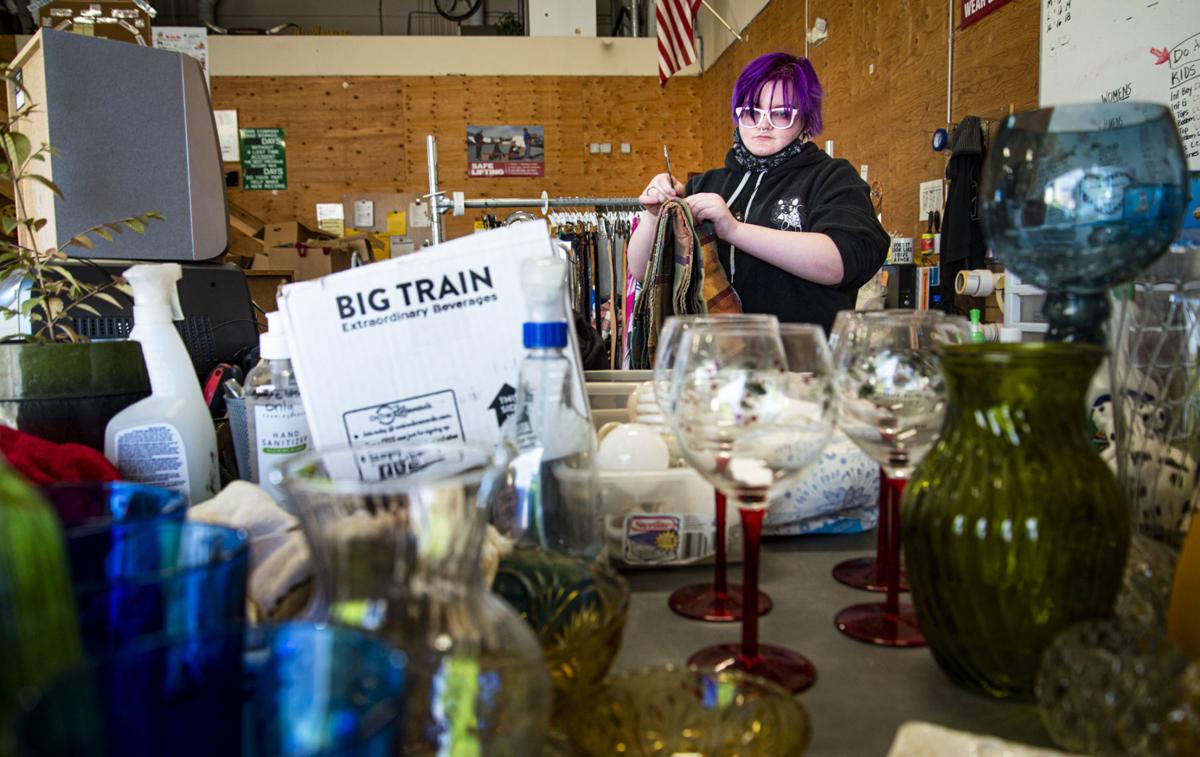 Sunshine Bryden sorts through a table of donated home goods at Idaho Youth Ranch in Nampa on Thursday. 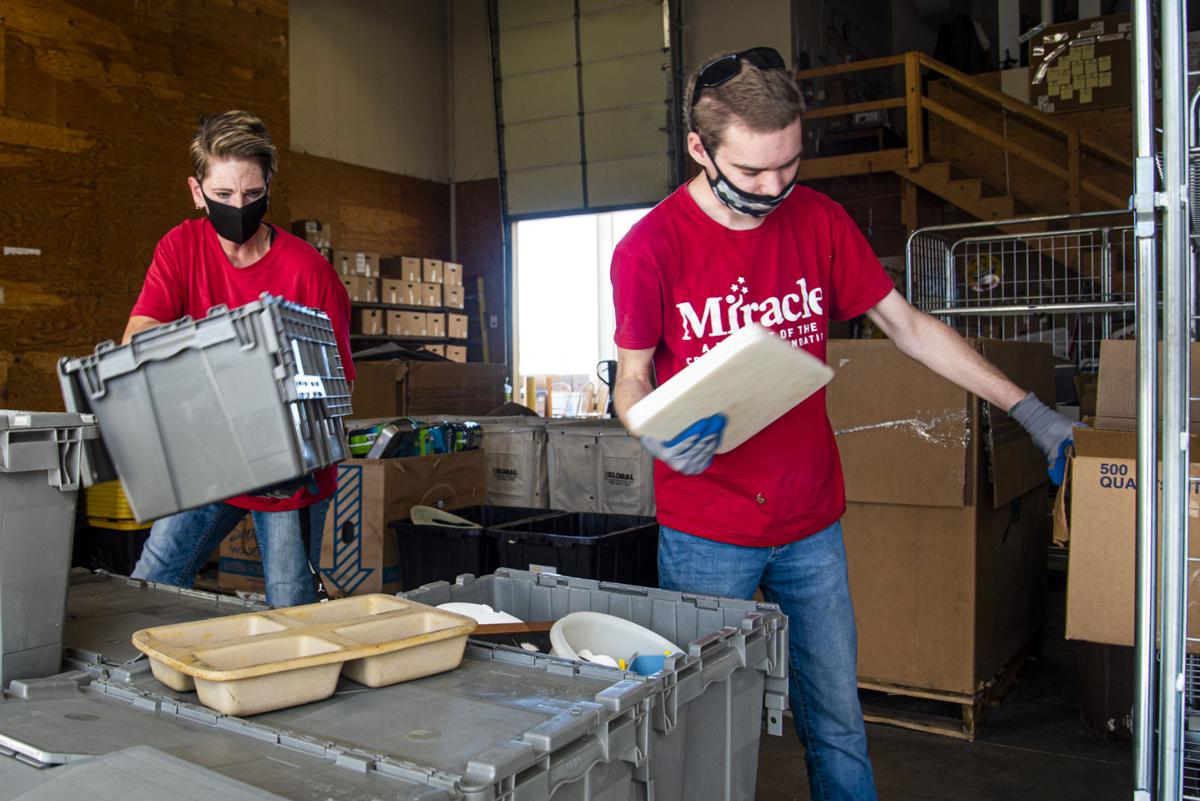 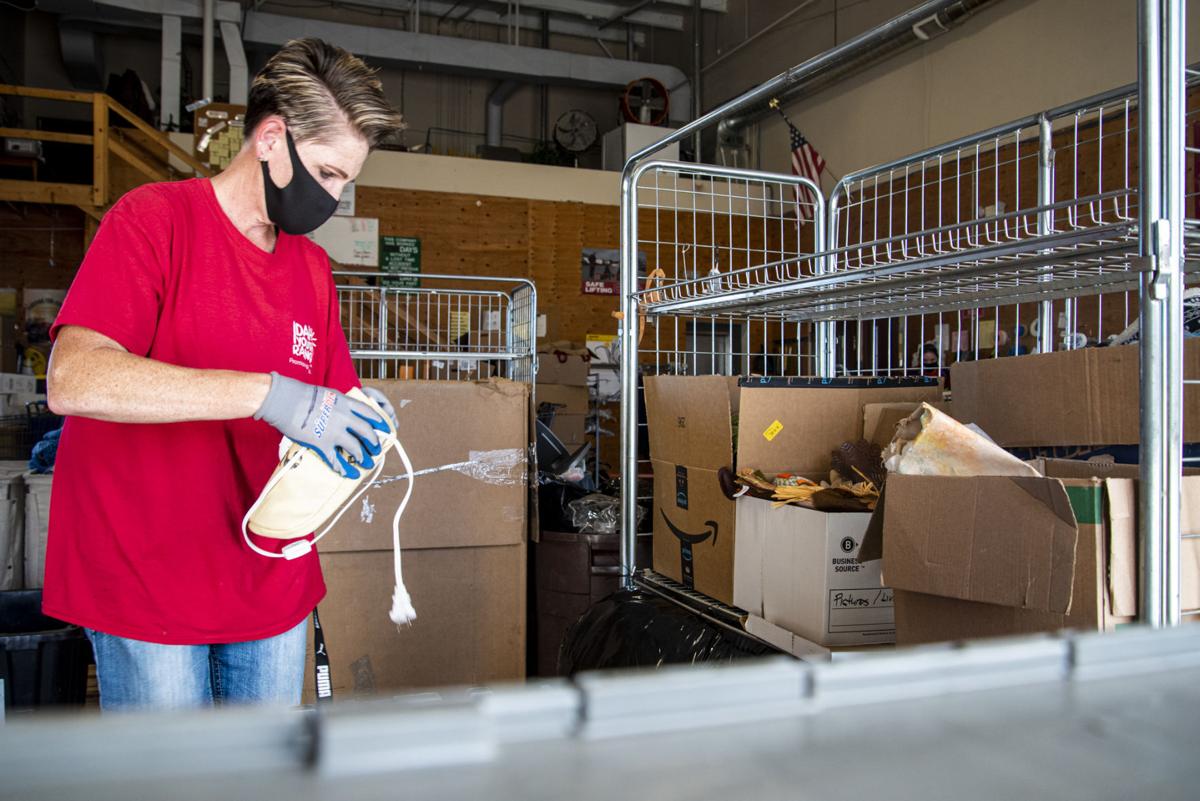 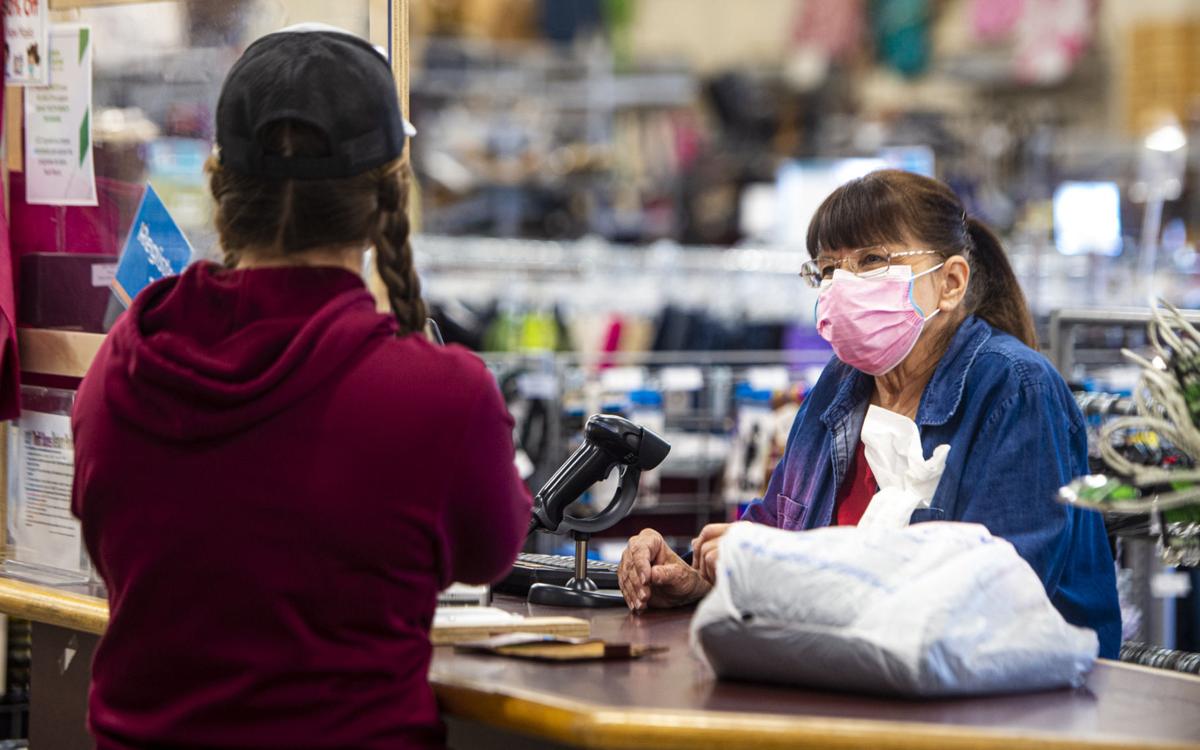 Robin Zabala, right, speaks with customers in the checkout line at Idaho Youth Ranch in Nampa on Thursday. 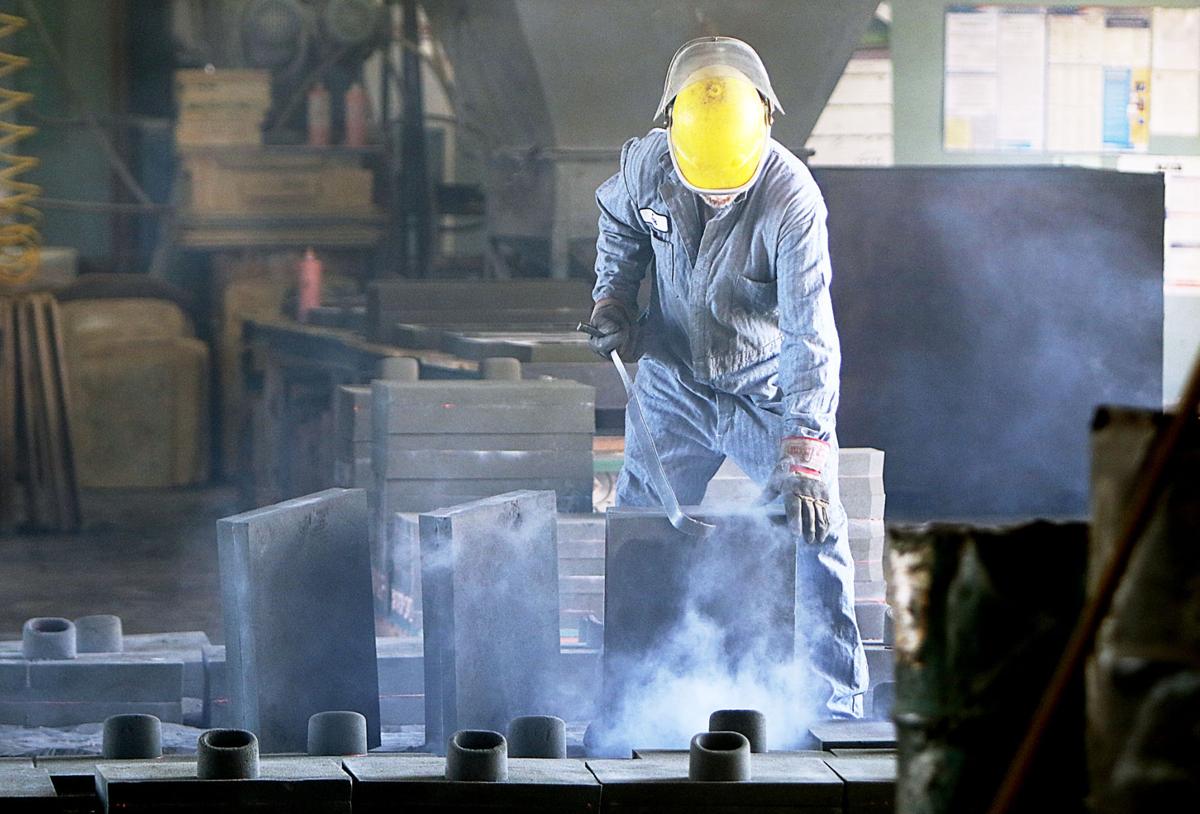 Workers clean up after a foundry operation at R & H Machine in Caldwell in this September 2019 file photo. 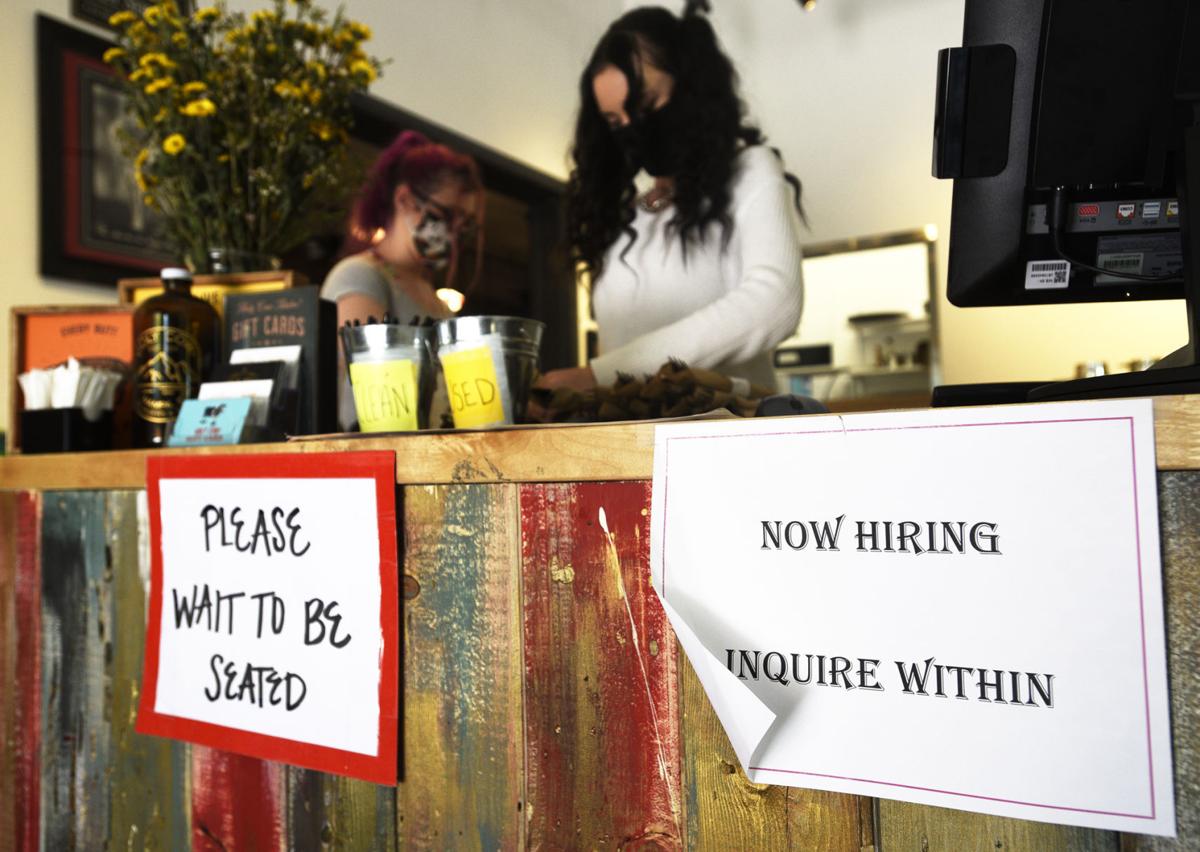 Front-of-house employees at Holy Cow! in Nampa roll silverware and clean up for the day while signs posted around the restaurant advertise hiring on April 29.

Sunshine Bryden, left, and Lori Ford, right, sort through donated items in the back of Idaho Youth Ranch in Nampa on Thursday.

Staff at Idaho Youth Ranch in Nampa work in the back warehouse sorting through donated goods on Thursday.

Robin Zabala, right, speaks with customers in the checkout line at Idaho Youth Ranch in Nampa on Thursday.

BOISE — A worker shortage, initially resulting from the economic slowdown caused by the COVID-19 pandemic, has yet to abate, puzzling labor experts and forcing employers to rethink how they do business — maybe for good.

Labor statistics show a strong workforce. Idaho's seasonally adjusted unemployment rate dropped to 2.9% in August, the first time it's dipped below 3% since March 2020, and the labor force participation rate has seen marginal gains this year while jobs remain steady. But a dearth of workers has persisted throughout the pandemic and lingers today, possibly due to shifting priorities and demographics among Idaho's workforce.

Idaho Youth Ranch, a nonprofit that raises money for child counseling through thrift stores, has more than 60 job openings around the state, the majority of which are in the Treasure Valley.

"We've got a pretty good variety of positions open across the organization that, like everybody else, they're really hard to fill right now," said Jeff Myers, vice president of marketing and communication. "Even though we have enhanced our pay and benefits considerably over the course of the last year, we continue to have more and more opportunities open for qualified individuals."

It's a similar story for employers in other industries. In April, the Idaho Press reported that Treasure Valley businesses were struggling to find workers. Recent follow-up interviews reveal that the same challenges are lingering, despite employers boosting wages and offering hiring bonuses.

"I haven't had one shadow through our door looking for a job," said Brock McGarrah, production manager at R&H Machine, a foundry in Caldwell.

The continued labor shortage is "confounding" economists, not just in Idaho, but across the U.S. and abroad, said Samia Islam, Ph.D., an economics professor at Boise State University. France, the United Kingdom and other countries are facing similar issues.

There's one thing experts say is definitely not the cause.

Many employers and politicians said they expected enhanced unemployment benefits — up to $300 in additional weekly benefits — were keeping people from returning to work.

Idaho Gov. Brad Little, along with 26 other governors (all Republicans but one), thought the same. That's why, in June, Little withdrew Idaho 11 weeks early from federal programs that provided enhanced unemployment benefits to workers who lost jobs or hours due to the pandemic.

“My decision is based on a fundamental conservative principle — we do not want people on unemployment," Little said when he announced the state's withdrawal. "We want people working. A strong economy cannot exist without workers returning to a job.”

Idaho's already low unemployment rate dropped one-tenth of a percent after Little withdrew the state from the unemployment programs. Studies looking at states that ended the enhanced benefits early, found a minimal impact on getting people back to work. One study, conducted by researchers at Columbia University, Harvard University and the University of Massachusetts Amherst, found that for every eight people who lost benefits early, one found a job by August.

"As for the unemployment benefit supplements acting as a disincentive for employment, there was little to no evidence to support that claim, even though some stakeholders seemed very committed to that viewpoint," Islam said in an email. "Well, now, we have proof positive that it was not the temporary supplemental assistance that caused the worker shortage since the situation persists even after those enhanced benefit program expired, like it did in Idaho."

In an emailed statement, Little said that ending unemployment benefits was necessary.

"The benefits had become a perverse incentive for people to go back to work," he said. "I heard Idaho employers loud and clear. Ending the benefits early was the right thing to do."

A recent analysis by Idaho Department of Labor Regional Economist Kathryn Tacke sheds some light on the local labor impact during the first year of the pandemic.

Many older workers dropped out of Idaho's labor force, temporarily, due to fears of getting sick at work, or permanently, through early retirement. The number of Idahoans 55 and older in the labor force fell 11% between March 2020 and March 2021, from 257,100 to 227,400.

A survey of 332 Idaho parents conducted by the U.S. Chamber of Commerce found that one in four parents said child care affected their employment, the Idaho Capital Sun reported. And nearly one in three respondents who made less than $50,000 annually said they had to quit, not take a job or change jobs because of child care issues.

There could be yet another reason for the shrinking labor force: burn out.

Throughout the COVID-19 crisis, public-facing jobs — health care, retail, bars and restaurants, education, airlines — have faced varying degrees of unpleasantry at work. Just the latest example: The city of Boise recently boosted security at its libraries, ice rink and City Hall because staff are facing harassment for enforcing mask requirements. The harassment has affected employee retention, a memo said.

Facing such hostility, "perhaps it is a rational choice" to leave the service industry "when benefits of having employment (wages, which are low in many of these service jobs) don’t equal the physical and mental costs," Islam said.

"Needless to say, this cannot be sustained as more people are likely to burn out from the added pressure and drop out of the workforce," she said. "… I think we are at a point where society has to reset the bar on the expectations from workers. Especially, now that all of us have a greater appreciation of the fragility of life. For me, the current situation is a signal that people are reassessing their priorities and expectations."

The coronavirus isn't the sole cause of the worker shortage. Shifting demographics are reducing the amount of people entering the workforce, and, employers say, generational differences in work culture are coming to a head.

R&H Machine, the Caldwell foundry, has success retaining long-term employees — some have worked there since the 1980s. But a younger demographic has been more difficult to attract, retain and motivate. Excuses to get out of work are common, as is tardiness, McGarrah said.

The construction industry faces similar challenges. A recent survey by the Associated General Contractors of America found U.S. firms are investing in new technology in an attempt to attract Millennial workers.

Meanwhile, many businesses are busy as ever — clients are "screaming for parts," McGarrah said — which is making work harder for employees at workplaces that are short-staffed.

"If we had more people in the stores, working, we could sell more to the folks who are coming in the doors, but shoppers are continuing to come in the door, wanting to buy what we have," Myers said. "One of the great things about having such a passionate team is folks really try to go beyond the call of duty to do what it takes to get the job done, but that also puts stress on people and it makes it hard."

Idaho Youth Ranch announced Thursday that, due to staffing shortages, it has stopped accepting patrons to its Hays House shelter for homeless, runaway and at-risk youth. The nonprofit is asking for the community's help to restore staffing levels so the shelter can begin accepting patrons again. For applications, visit youthranch.org.

Dylan Hutter, owner of Holy Cow!, a burger restaurant in Nampa, said the restaurant is now closing on Mondays to make workloads manageable for staff. Holy Cow! is one of the businesses that was scrambling to find workers in April. Line cooks were offered $500 signing bonuses, on top of "top tier" industry pay.

A planned second restaurant was put on hold. And the burger joint likely will close for two five-day periods later this year, to provide breaks for staff.

"We started to make preparations for a scenario that things don't change," Hutter said. "We've been trying to go so full-throttle because we've got such a huge spike in business, but the reality's kicked in that it's an unsustainable rate."