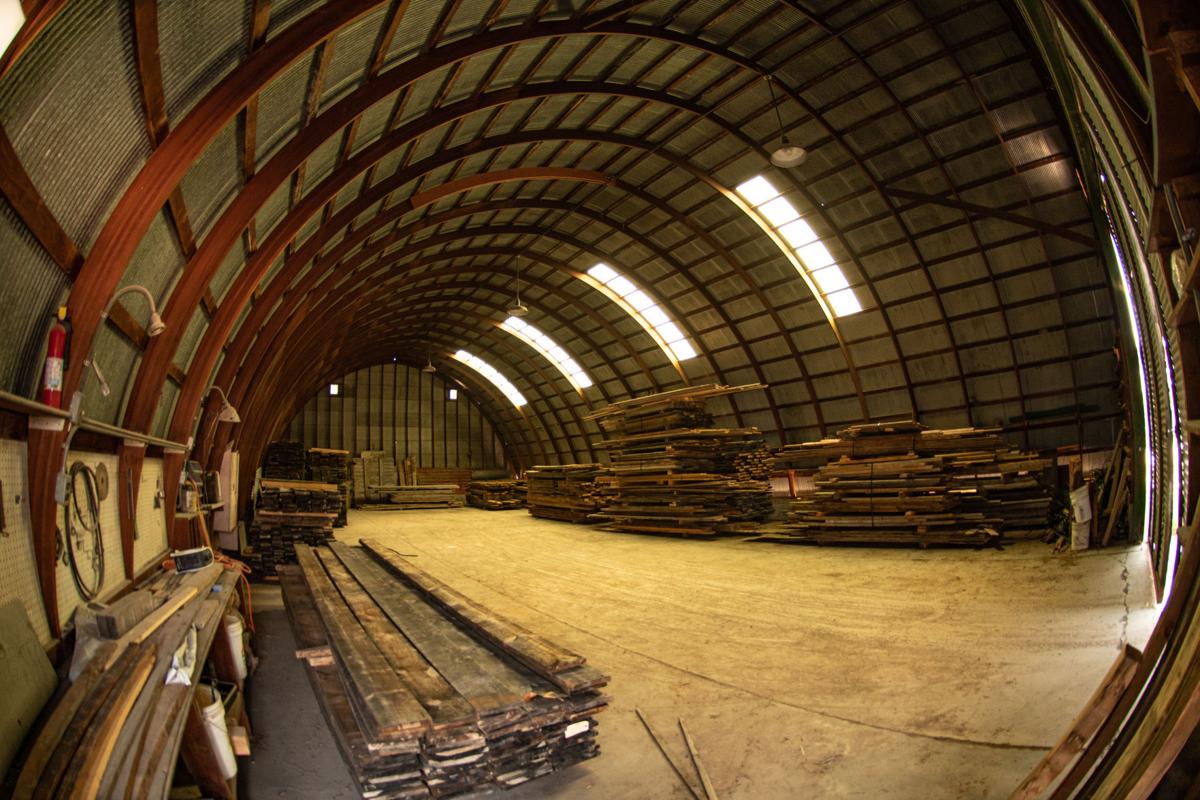 A back building is filled with Historic Woodworks’ lumber stock. 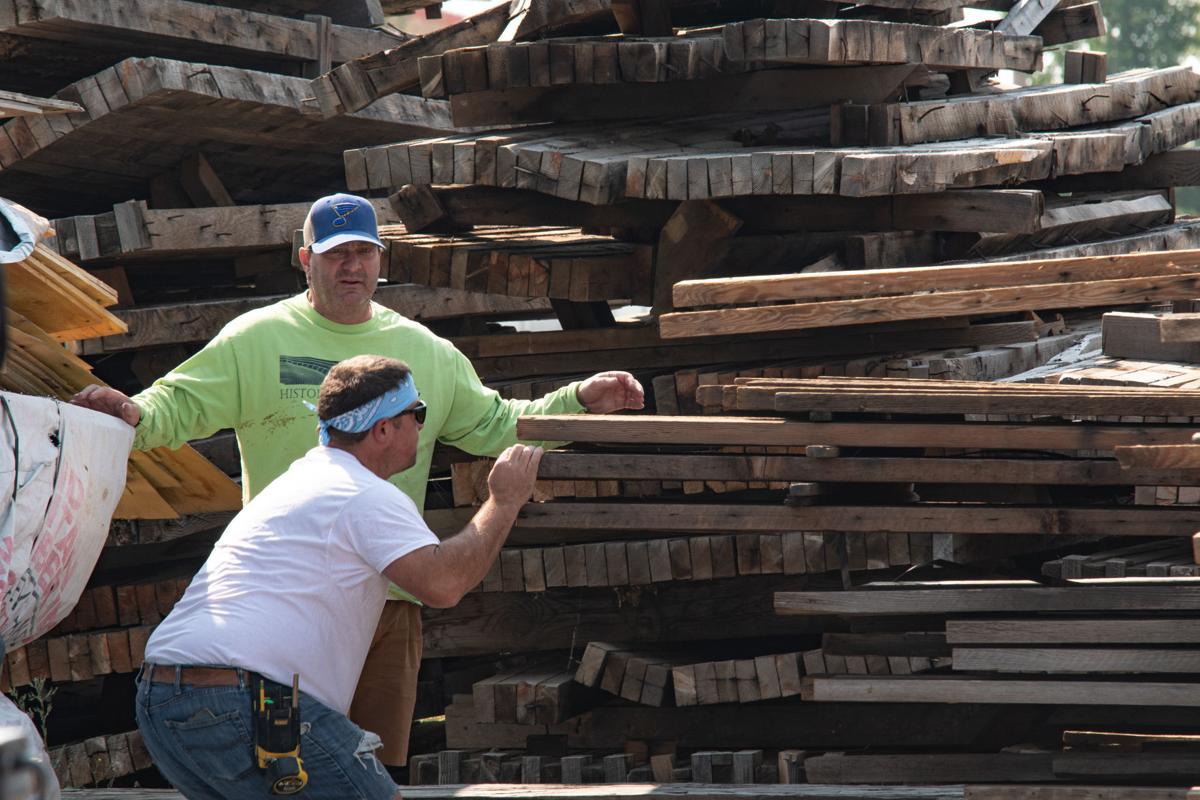 Josh Weltman (green) looks at his stock of lumber with Dave Smith, one of the other craftsman at Historic Woodworks. 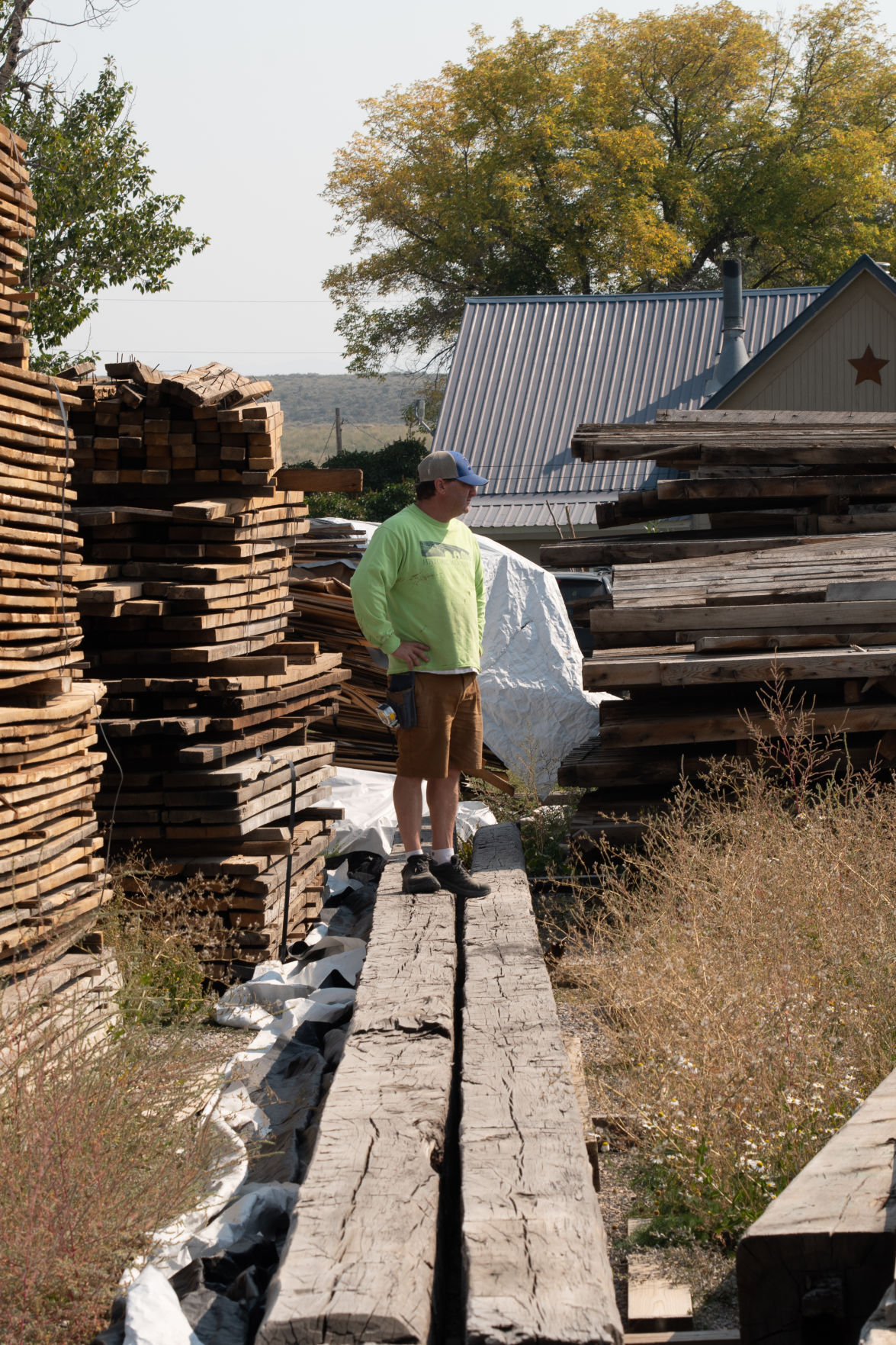 Josh Weltman stands on a 60 foot beam that was brought here from Oregon. It is made from original old-growth timber. 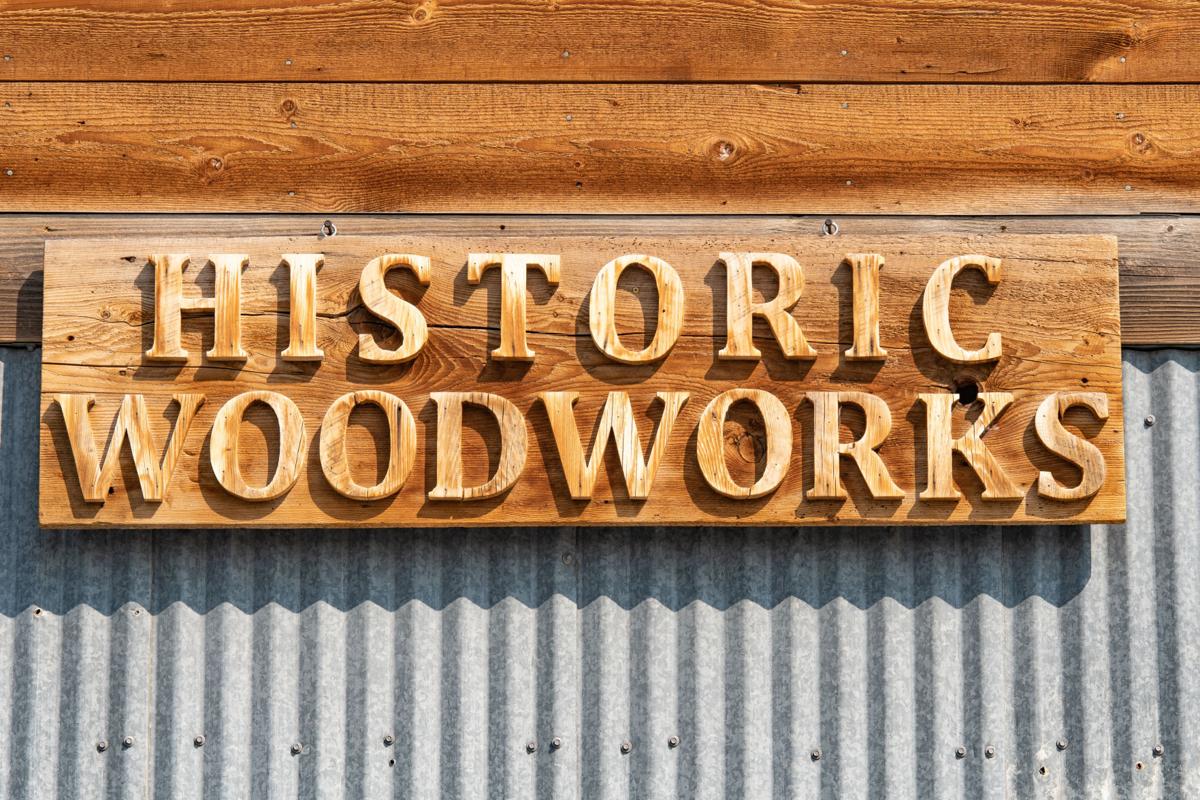 Historic Woodwork’s sign above the shop entrance off Central Ave. in Tetonia. 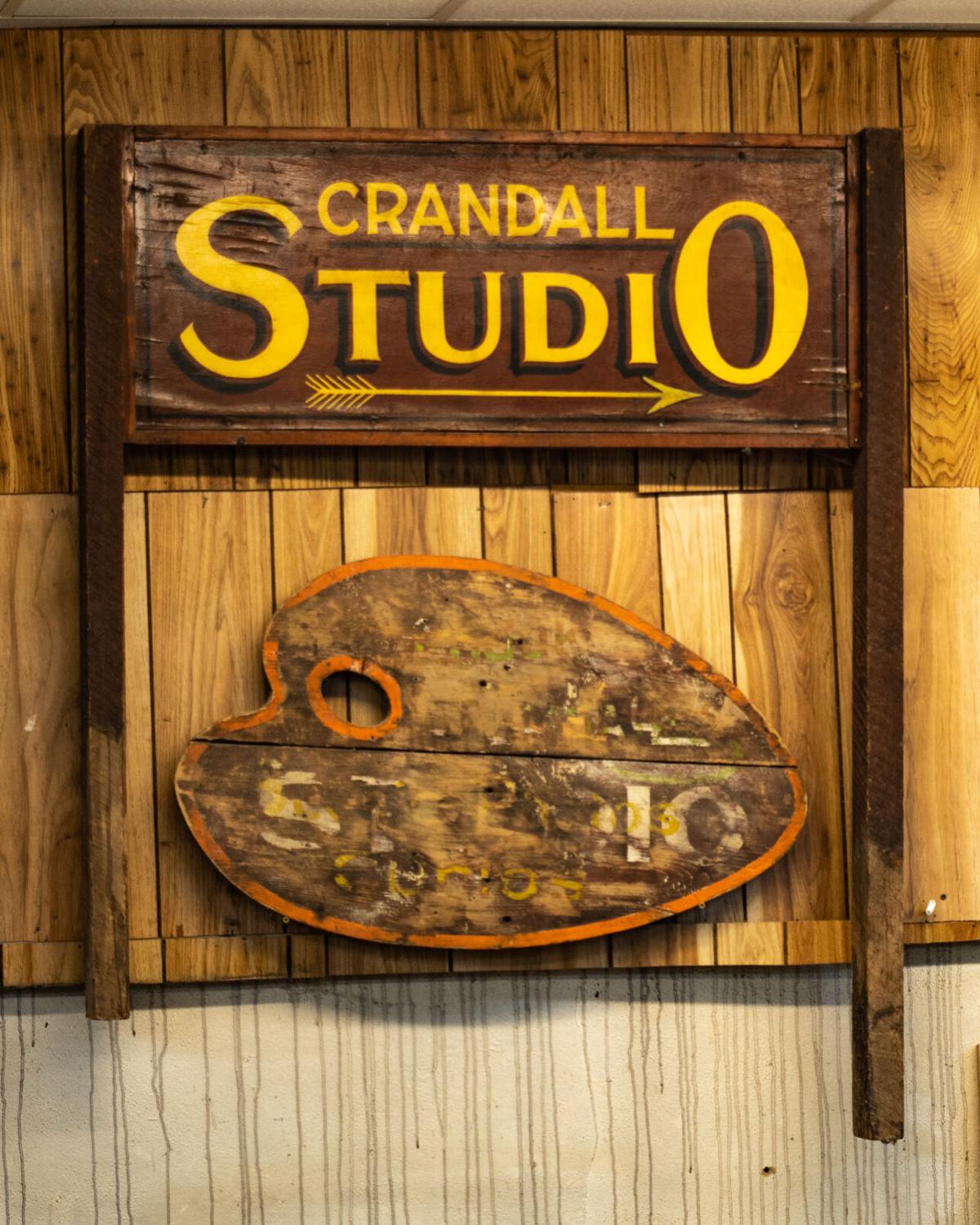 A sign for Crandall Studio, the famous studio run by GTNP pioneering photographer Harrison Crandall hangs in the shop. The sign was given to Weltman by Quita (Crandall) Pownall and Hal Pownall, Harrison's apprentice. 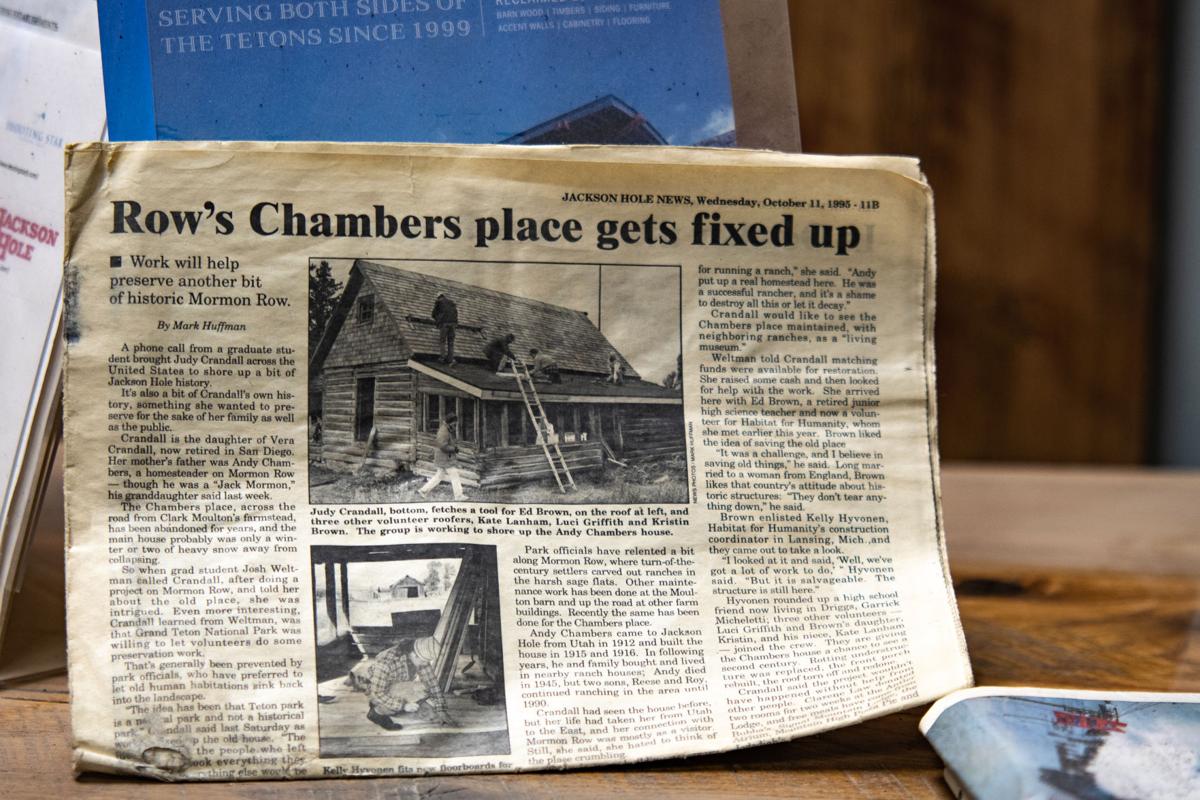 A back building is filled with Historic Woodworks’ lumber stock.

Josh Weltman (green) looks at his stock of lumber with Dave Smith, one of the other craftsman at Historic Woodworks.

Josh Weltman stands on a 60 foot beam that was brought here from Oregon. It is made from original old-growth timber.

Historic Woodwork’s sign above the shop entrance off Central Ave. in Tetonia.

A sign for Crandall Studio, the famous studio run by GTNP pioneering photographer Harrison Crandall hangs in the shop. The sign was given to Weltman by Quita (Crandall) Pownall and Hal Pownall, Harrison's apprentice.

A name can be a curious thing.

Sometimes, all it can be is a designation. Other times, it can be an identity.

In the case of the latter, it can describe an entity’s values, methods, and character.

Combining a natural talent for woodworking with a love for history, Weltman has built his business into a Tetonia institution.

Like any institution, there must be a building to house that history. Weltman’s shop checks those boxes, and then some.

The shop, located on Central Ave. in Tetonia, has served various and eclectic uses over its history. They range from a hardware and grocery store, to a Studebaker dealership, to a Prohibition-era speakeasy.

“There are old pictures inside city hall with dog sleds in front of the building,” said Weltman.

Weltman has had to work hard and dedicate a lot of time to see the building in its current form. He did a major renovation around five years ago, with the mentality of “Preservation is a priority.”

“I bought this building over 20 years ago and there’s a ton of history in it,” said Weltman. “It wasn’t always the dream shop for me that it is now.”

During that renovation, he found and collected relics from past users such as Studebaker parts and antique signs. (picture of sign in shop)

While Weltman doesn’t have to go far to see the history, he still has searched far and wide to find it.

Constantly on the hunt for proper reclaimed lumber and old structures to take down, Weltman’s travels have led him to some fascinating areas throughout the years.

“You have these amazing pieces that you find, the wood itself is amazing, and then you also have these ones that are historically awesome,” said Weltman. “I enjoy the hunt.”

Weltman has taken lumber from massive barns in Nebraska, to a decrepit pickle factory in Colorado, and back again to Grand Teton National Park’s famous Mormon Row.

“I’ve been all over the region, both coasts,” said Weltman. “Places you would never go or hear of usually.”

Not only has Weltman seen some cool sights, but he has also met some amazing people.

“I worked with Amish guys around the country,” said Weltman. “To meet them and their families and experience their way of life it’s really cool.”

Weltman has seen a tendency for friendships to develop through a love for the history of the buildings and the wood he takes down.

“You meet these people and a lot of times end up being friends with them, it’s always the history that connects,” said Weltman.

His love for what he can find extends not only into his personality but also into his memory.

“I don’t have the best memory but with this kind of stuff I think I do,” said Weltman with a laugh. “I can usually look at the stacks of wood and remember exactly where they came from.”

If that isn’t a sign that Weltman was born to do what he does, I don’t know what is.

Weltman has loved woodworking for as long as he can remember, with it playing a central role in his schooling and adolescence.

“People I knew as a kid have told me I was always making sawdust wherever I went,” said Weltman.

Weltman first took woodworking classes in middle school, although he would begin working on his skills even before that.

“I started pursuing it as early as grade school and I never really had anyone to teach me until shop class in middle school,” said Weltman. “At one point I had woodshop class twice a day and kept with it all the way through college.”

This love was not exclusive to woodworking, with the love of old barns and structures also manifesting in those early years.

“Old barns, it was the same thing, I was just fascinated by them and the history,” said Weltman.

Weltman had some sage advice for those wondering what their passions are.

“Some things in life we are good at and like to do, and some things we like to do we’re not that good at,” he said. “It was always there, it was always something I was good at.”

During the first years of Historic Woodworks, Weltman was not immune to the adversity beginning professionals so often have to face.

“It’s some of the most dirty, dangerous work you can find,” said Weltman. “You gotta think about how to take down an old building that’s possibly, probably dangerous and definitely dirty, get the wood out without breaking it and pull the nails out, process it, sort it.”

It was a steep learning curve, but with the help of many like-minded individuals, Weltman found his way.

“When I started meeting other people in the industry and seeing how it was done and all the processes involved it was a big learning curve,” he said.

He also attributed the lessons learned during those early years to his commitment, and ever-growing love for the product.

“I just decided to start taking old barns down and just started doing it,” said Weltman. “I really liked the wood but it took me a while to learn about the industry and all the different products.”

Weltman now has many years and experience in the reclaimed lumber industry under his belt, working with contractors, homeowners, architects, and designers to make their dreams a reality.

“Fortunately I’ve been doing this long enough where I have good, reliable sources where I can get pretty much anything in the reclaimed lumber industry,” said Weltman.

No two pieces of wood are the same when they enter the shop.

“It’s just so much rougher and unrefined than a new piece of wood,” said Weltman. “There are no straight edges and the dimensions are all different.”

Some unique products, such as a set of 60-foot-long, 12”x12” old-growth trusses from Oregon, keep Weltman’s eyes keen for new and different products.

His knowledge stems from large amounts of time dedicated to researching and learning about the products he acquires.

“I did a lot of historic research, talking to all the old homesteaders,” said Weitman. “You’re always seeing fascinating stuff and learning fascinating things, there’s so much history in its first life and first use.”

This research culminates in a truly one-of-a-kind product.

“A lot of it is old-growth trees and the wood is hundreds of years old,” said Weltman. “There’s no duplicating the look and nothing matches it.”

“I have been lucky to fall into this spot with the way things have worked out,” said Weltman. “This building, this property, this community, it’s all been just great.”

Weltman is working on a handful of projects around the region, with a convenient location in a booming Teton Valley homebuilding market.

“We’re in a good market for this and we’ve been here for so long, it is really convenient for us and the clients to be right here,” said Weltman.

Interacting with the local communities for so many years has brought Weltman a sense of belonging and commitment to the people he helps.

He hopes that he will become a part of Teton Valley’s history, just like the craftsmen and homesteaders that were originally built here.

“It is a young history, just think that barely a hundred years ago you could still homestead here,” said Weltman. “It’s still going and now I feel like I’m a part of that history too. It feels good to contribute to the landscape in a positive way.”

Admiration for those early craftsmen is a large motivator for Weltman.

“I feel like I have a deep understanding of the history of what’s happened here and how these people settled and survived and got this wood and where it came from,” said Weltman. “It’s so cool to share the stories.”

A worry for Weltman is that less and less people will take the time to learn about our local history, which could mean people lose their sense of place and community identity.

“The wealth of history that I’ve experienced and I know, so much of that history to some people might not be that significant, but it is and a lot of it is disappearing,” said Weltman.

With the spirit of Teton Valley living within individuals such as Weltman, there must always remain hope that we can continue a legacy of traditional western values in our community.

Losing sight of that will not only do irreparable damage to our sense of community but will go against the ideals of so many who built our valley to what it is today.