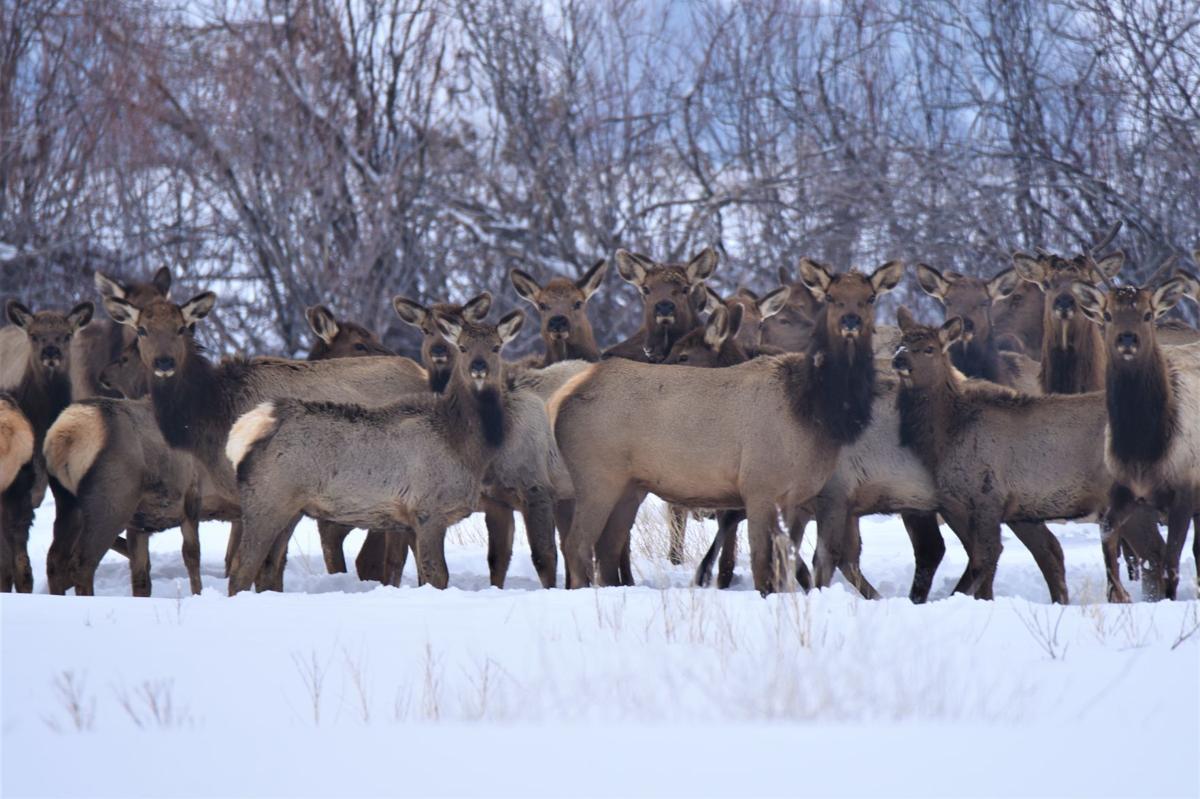 About 170 elk move into the area south of Sugar City near U.S. Highway 20 recently. The herd was escorted across the highway on Tuesday. 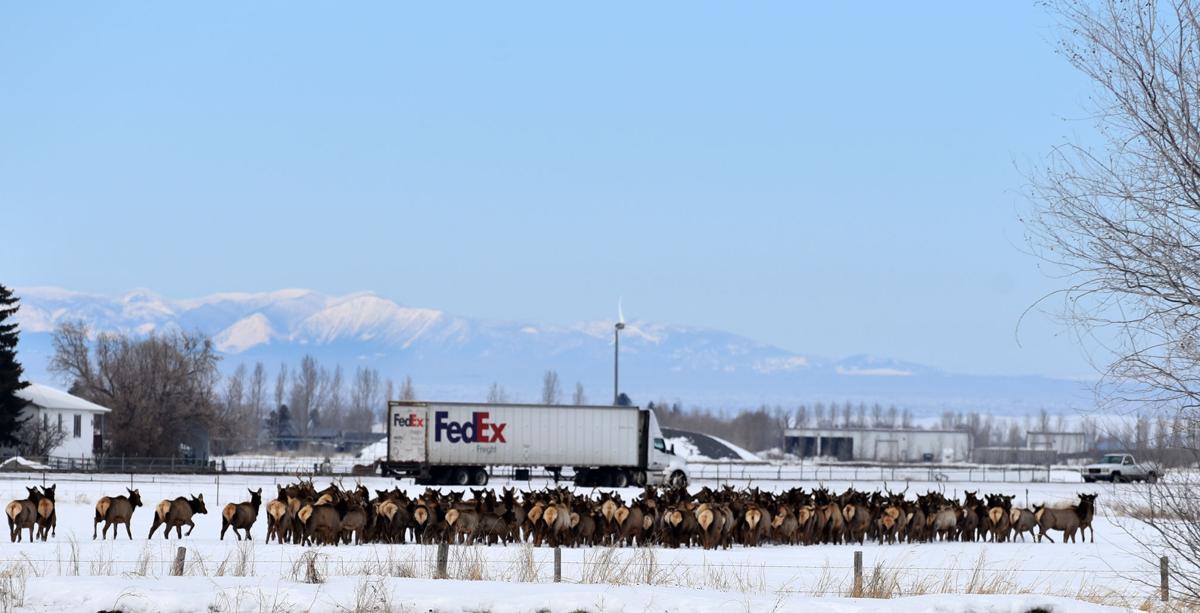 A large herd of elk gather in an open field near U.S. Highway 20 south of Sugar City on Tuesday before being coaxed across to the west side. The elk seemed intent on wintering in the Sand Creek Desert west of Sugar City.

About 170 elk move into the area south of Sugar City near U.S. Highway 20 recently. The herd was escorted across the highway on Tuesday.

A large herd of elk gather in an open field near U.S. Highway 20 south of Sugar City on Tuesday before being coaxed across to the west side. The elk seemed intent on wintering in the Sand Creek Desert west of Sugar City.

As the saying goes, the third time is a charm.

Tuesday afternoon, the Idaho State Police with the help of Idaho Fish and Game and others, shutdown U.S. Highway 20 near Sugar City for just under 15 minutes and played crossing guards to about 170 elk for the third winter in a row.

“It seemed like they knew the routine,” said James Brower, of Idaho Fish and Game who was at the scene.

Brower said almost like clockwork, the elk came down from the Teton River Canyon at the same time as the past two years. They massed just south of Sugar City near where the Teton River, Idaho Highway 33 and U.S. Highway 20 meet. The elk had definite ideas about where they want to spend the winter.

“The Sand Creek (Desert) is where they want to be,” Brower said.

Fish and Game offered up snacks to the 500- to 700-pound animals in hopes of keeping them away from the highway. Madison County Sheriff’s deputies also helped patrol the area hoping to keep them off the roads.

At about 2 p.m. Tuesday, the elk gathered in a field near Highway 20. With a little coaxing, and a closed highway, the elk marched across the road heading west.

“They came out into the open and we didn’t have to encourage them too much,” Brower said.

“This was a well-coordinated effort and we would like to thank (Idaho State Police), (Idaho Transportation Department), Madison County and all of the many landowners involved in making this happen safely,” said Doug Petersen regional conservation officer.

Brower said one of Fish and Game’s biologists who “is good at counting large groups” counted 171 elk.

Brower said this is the third year in a row that the elk moved from their historic wintering area in Teton Canyon and have followed the river down toward Sugar City and Rexburg.

In 2019, six elk from this herd were struck and killed on Idaho Highway 33 shortly after midnight.

Signs were erected this past week in the area to minimize disturbance to the elk, but some people have gone out of their way to harass the animals.

“Several snow machines were documented chasing a group of elk along the Teton River on Sunday afternoon,” Brower said. Chasing wildlife is illegal. He said some minors were detained in the incident.

“Please be respectful and give wildlife some space, especially during this time of year when they are extremely vulnerable,” Petersen said.

Last February, large groups of elk were escorted across the highway on their way to the Sand Creek Desert. The elk remained there until spring when they trickled back toward the Teton River canyon.

Brower said there are more elk wintering in the Teton River canyon but they hope they don’t have any major winter travel plans. But elk are known to sometimes move into the area south of Sugar City.

Officials urge the public to keep their distance and motorists to slow down while driving through the area.

“Motorists should continue to use caution in the area and keep an eye out for wildlife crossing roads,” Fish and Game said. “It is possible for additional elk to be in the area next to the highway and they may decide to cross on their own at any time.”

Fish and Game said it will continue to monitor the situation.

Fish and Game has three emergency conditions that can trigger winter feeding. Those include preventing damage to private property, such as damage to haystacks; public safety concerns, such as elk congregating near a busy highway; and harsh winter conditions.