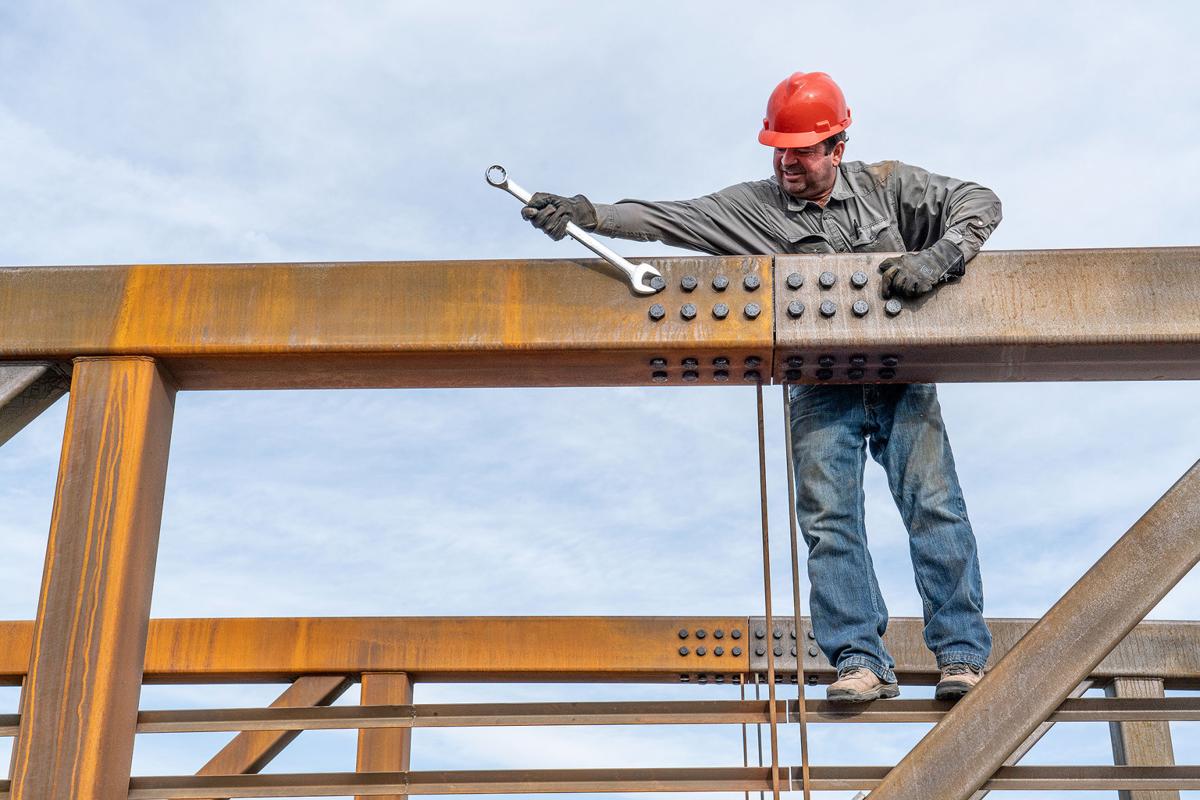 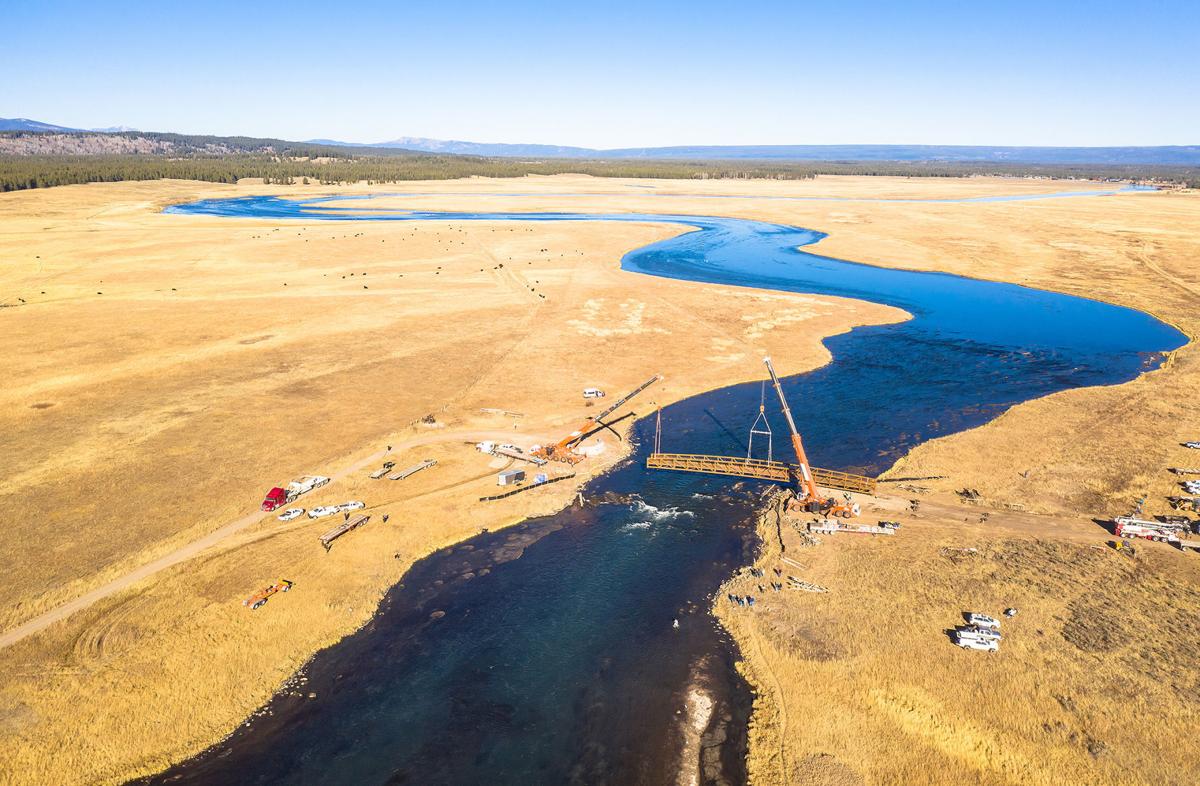 Two cranes move the new Ranch Bridge into position across the Henry’s Fork of the Snake River at Harriman State Park in this recent drone aerial photo.

Two cranes move the new Ranch Bridge into position across the Henry’s Fork of the Snake River at Harriman State Park in this recent drone aerial photo.

Getting from one side of the Henry’s Fork River to the other just got easier after a key transportation link returned to Harriman State Park last week.

The new Ranch Bridge replaced the nearly 100-year-old bridge that was condemned in the fall of 2017. The original bridge was believed to have been built to move cattle in and out of the Harriman Ranch in 1921. Friends of Harriman State Park president Jodi Stiehl said a quote from a letter written in 1921 by a ranch foreman references the Ranch Bridge.

“He said they didn’t have to ford the river or go all the way around anymore (with the cattle),” Stiehl said. “It saved them about 8 miles of pushing cattle to get over to the other side. It also served as the main entrance into the Railroad Ranch. The way we go in now didn’t exist until it became a park in 1977."

Besides being an original entrance and a bridge for cattle, the old bridge was used by anglers and for recreation connections to trails. The Island Park Community Trail that nearly reaches from Henry’s Lake State Park to Harriman State Park crossed the Ranch Bridge.

The new steel bridge spans the river 170 feet and 10 feet wide without any mid-stream supports required by the old bridge. The bridge, meant mainly for pedestrians, is built to hold 20,000 pounds — enough for a small herd of cattle, dozens of hefty hikers or that famous Island Park snowpack. Cattle grazing operations continue at the park today.

Stiehl said originally her organization wanted to rebuild a new version of the old historic bridge.

“We spent two years pursuing that avenue and we could not get any contractors to bid on the project,” she said. “They all said that they wouldn’t build a bridge to 1900 standards. They would only do something that was more modern.”

The new bridge was built by Big R Bridges of Greeley, Colo., in the company’s Minnesota plant and showed up in three pieces on the backs of three semi-tractor trailers on Oct. 28. Two large cranes from CCI Crane and Transport in Idaho Falls maneuvered the sections into place.

The new bridge cost $750,000 and was paid for through a Friends of Harriman State Park fundraising campaign.

Park manager Mark Eliot said the new bridge will make more ground accessible for skiing, fat bikes and snowshoeing. He said new trails might be put off to a future date.

"We're already stretched to keep up with the grooming of the trails that we already have," Eliot said.

Now that the project is over, Stiehl said the 10-year-old organization will turn its attention on other needs of the park.

“We're looking at a three-year trails initiative,” she said. “To give the trails a little bit more of a facelift. There's some ruts and things like that."

Stiehl said she once served as the assistant park manager at Harriman until the birth of her son in 2012.

“I always thought the bridge was kind of our weak link to the community because I knew it was on its last legs,” she said. “I always wanted to see it get finished. In 2009, they tried to redo it but all the budget cuts happened in 2010. So, it was a project that just fell away. When I stepped down, I became the president of the Friends group. I’ve always had that in the back of my head that we’re going to get that done and get that connection back in place.”

Stiehl said she expects the bridge to be used extensively by hikers and bikers in the snow-free months and cross-country skiers and fat bikers in the winter.

“The Fat Bike Pursuit (winter race) used to cross the old bridge until it was condemned,” she said. “Then they took a different route. I’m not sure if they’re going to go back to the old route or stay with the one they have currently. It's there now if they want to use it.”

Cattlemen might also make use of the new bridge.

A grand opening of the new bridge is planned for June 15, 2021, the day the park opens for fishing and the bird sanctuary closures are lifted. Only a couple of dozen people were there for the installation last week.

“Over the last five years I've looked at it a lot on paper,” Stiehl said. “But when it went in place last week there was definitely some tears for sure.”