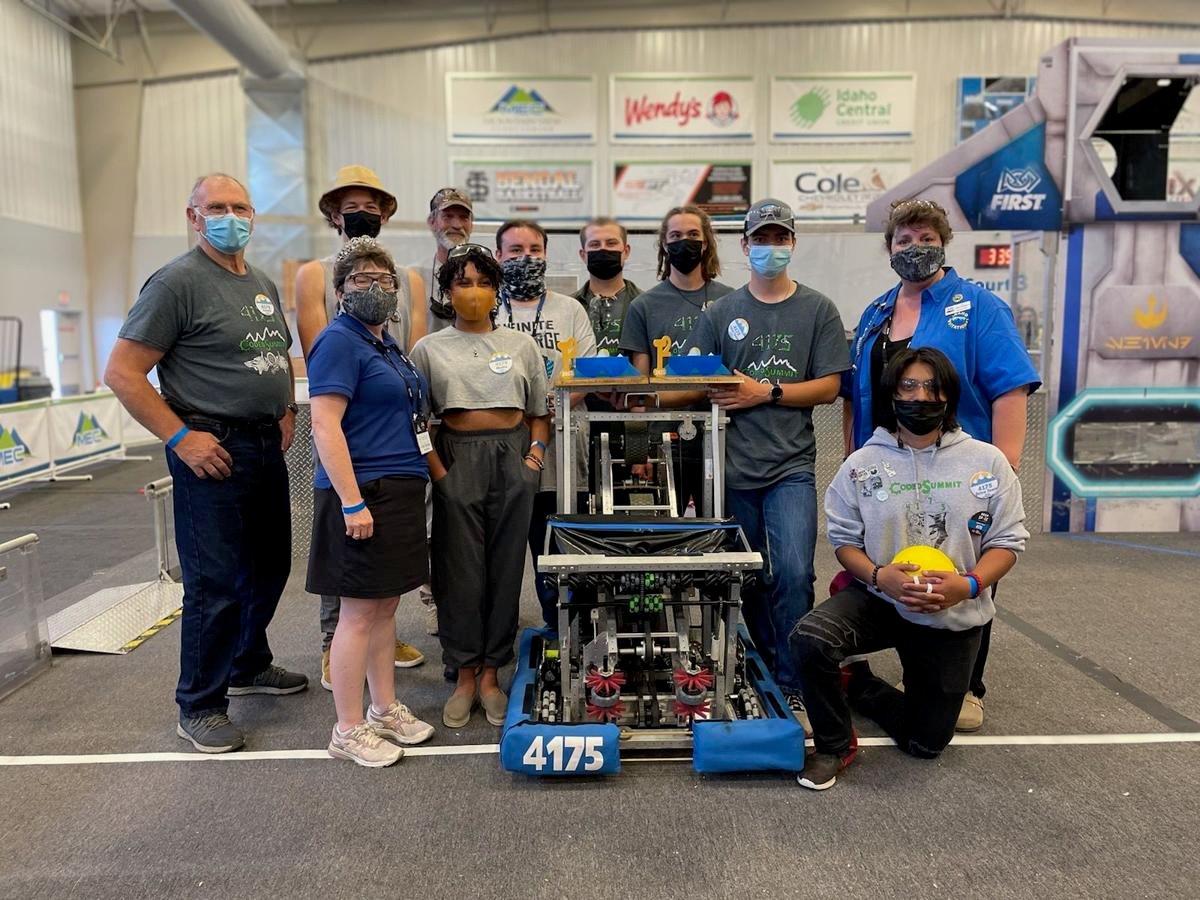 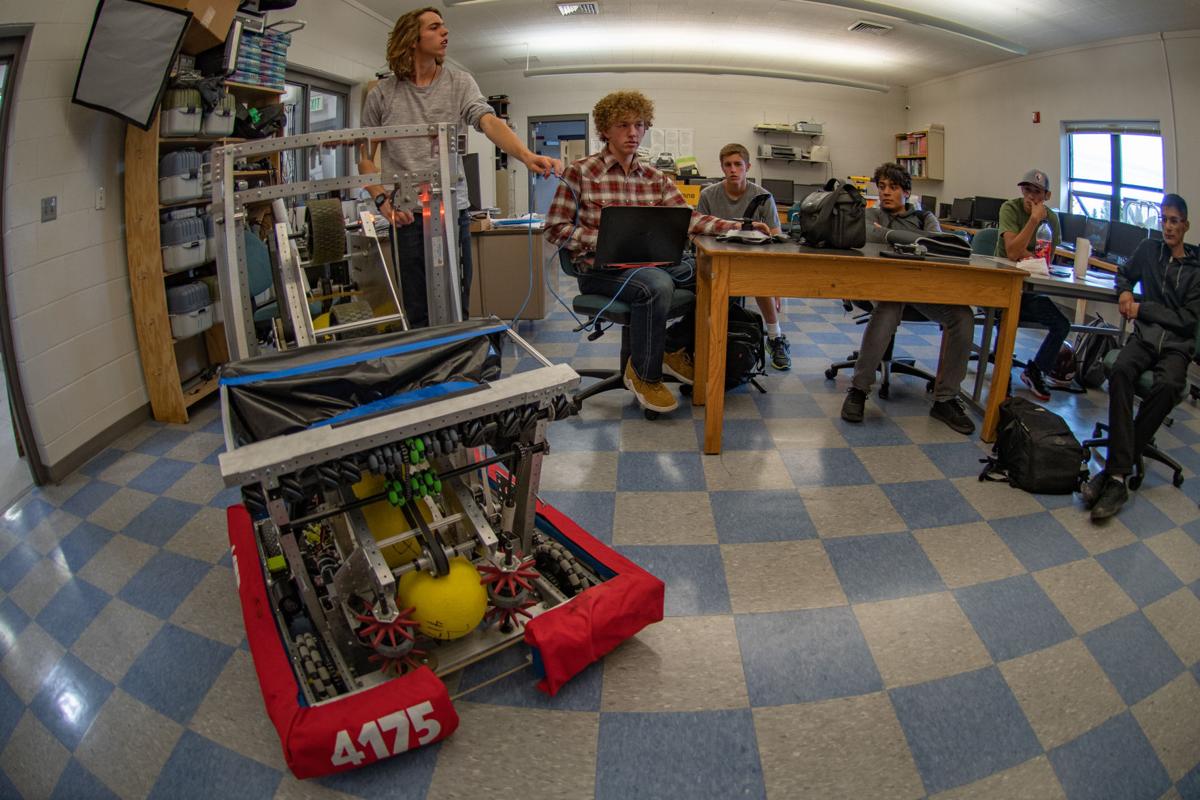 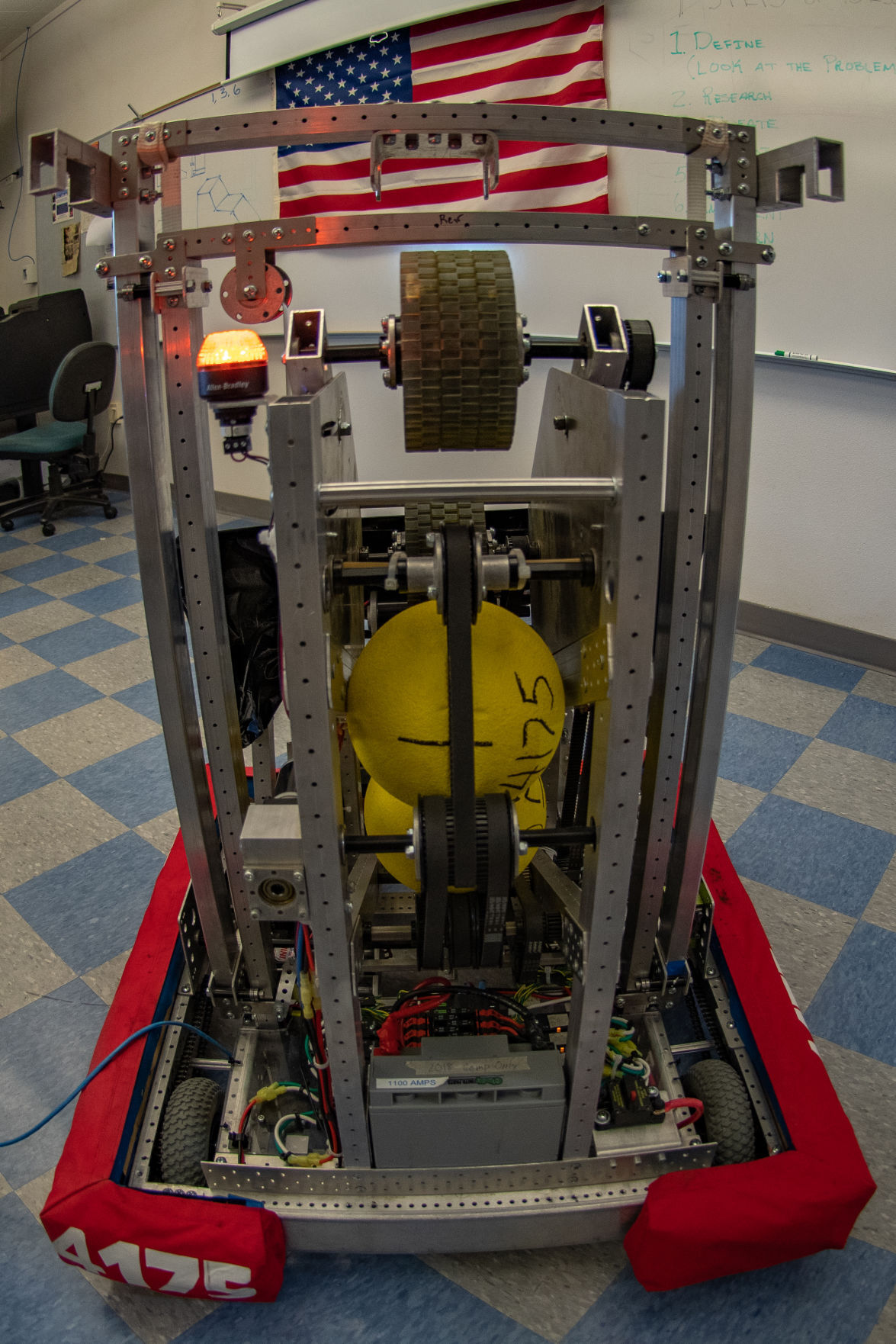 It’s 1:50 p.m., and the bell rings throughout Teton High. Students begin filtering through the door, walking into a classroom.

This isn’t your normal classroom.

Half shop, half computer lab, Mark Hansen’s classroom is complete with CNC machines, design software, and everything else needed to build a robot.

Most of the THS robotics team, known as Coded Summit, surround Hansen as he gets class started. In the middle of the group stands their machine, at about four feet tall.

The machine, designed to pick up and throw small foam balls, has brought Coded Summit recent success as champions of the Idaho FRC regional robotics competition. For THS junior Nate Little, just getting there was an achievement.

“Just even getting there is an accomplishment in itself, let alone succeeding and winning,” said Little.

Little, along with fellow junior Cole Pike, talked through the competition, which is designed to test not only the machines but also team members.

Teams are required to build a machine (not more than 125 pounds in weight) that can shoot 8” foam balls through 12” targets, withstand the battering of other machines, and reach up to 65” to hoist itself into the air. Machines can both be controlled by human input and automate controls for themselves.

The design process is demanding and requires unique equipment and skills.

“We really try not to reinvent the wheel. We’ll take designs from other robots, other years, and implement it into our designs,” said Little.

Writing the code is the biggest challenge according to Little.

This year’s machine took about three or four different prototypes, with parts being ordered on the internet. It is a very intensive process and teaches Coded Summit members some highly specialized skills.

“Starting out, I learned a lot about CNC machining, 3-D modeling using CAD, and Autodesk products to design and build things,” said Little. “If I can think it, I can dream it, and I can build it. The learning curve was very high, It teaches you to fail. You learn, you grow, and that’s what it’s about.”

Teams were grouped into alliances and played 10 rounds of pool play where advancement points would be earned. After the pool play, teams were re-grouped and set into a final bracket. For the final round, Coded Summit was allied with teams from Fort Collins, CO, and Big Piney, WY.

Competition isn’t the right word to describe the event, according to Little.

“The FRC community is really great when we were there if we needed any tools or parts that we didn’t already pack we’d ask other teams and they’d be more than willing to help out, It’s a friendly competition,” said Little.

Mentor Mark Hansen labeled the event a “Coopertition”, a blend of the two words cooperate and competition.

While the ‘game’ relies on technical prowess to build and hone the machines, strategy is also crucial, something Little found out was a key to success.

“I formed some better game plans and changed my style of driving and that made all the difference,” said Little. “It’s like chess, we formed a killer game plan.”

Just like traditional sports, everyone on the team has a role that they need to play. The process for finding these roles comes naturally.

“It’s kinda like the Smurfs, they’re good at one thing, and they kind of get named after it,” said Little. “We have our defined roles, and we just help each other along the way.”

Hansen, one of the three team mentors, has been here since the start, “about 10 years ago.”

He is joined by fellow mentors Steve Roth and Taylor Herndon. Hansen sees this role as both a teacher and an enabler.

“One of the things that I do is I teach them, the kids, how to teach others. I am amazed by the skills flooding down into the rest of the student body,” said Hansen. “My philosophy is to give these kids enough experiences so that they make decisions about what they want to do with their lives.”

Hansen could barely put his amazement in words, especially when thinking about where he sees students end up after learning these skills.

“I try and make this stuff possible so that these kids can excel,” said Hansen. “How do we put them onto a level playing field with some of these big schools and specialized programs across the country?”

The chemistry between Little and Hansen was apparent, with Little, a junior, already confidently talking about what he wants to do after high school.

“I got approached by Boeing, which is pretty awesome,” said Little. “Something that big employers are looking for now is well-roundedness.”

Little has clearly displayed that well-roundedness, both in his exploits as the robotics driver and in another passion, music.

“It’s one thing to be good at engineering and everything but it’s another thing to be well rounded,’’ said Little. “I told her (the Boeing rep) I play five or six different instruments and they just love to hear stuff like that.”

When asked if he wants to do anything specific, Little had some impressive answers.

“I kinda want to go into mechanical or bioengineering, I think they’re both super cool,’’ said Little. “The top school on my list of colleges is my dream school, Yale.”

With graduation still around a year and a half away, Little has already identified a strategy to get in.

“What’s really nice about them is they’re a needs-based college. If you meet their criteria, they’ll give you a full ride,” said Little.

“Plus, where I have accomplished so many things in my high school years, they’ll probably give it to me, most likely,” said Little. “I’ll have to check, but I got told most likely that I’d get in if I applied.”

Junior Cole Pike also had a great answer, citing how he has learned as a reason for choosing what he’s interested in.

“All the past things I’ve learned give me an understanding of how it works, and this is how I’d apply that knowledge,” said Pike. “If I was going to take all of the fields that I’ve learned stuff in it would probably be something with robotics ‘cause everything is combined here.”

Despite their success and level of talent, Coded Summit has struggled to accrue funding for their program.

Some of the blame for that can fall on the State of Idaho, where per-student spending is the lowest in the country.

However, robotics isn’t the least expensive extracurricular activity. Expenses between parts, entrance fees, and equipment can add up fast.

“It’s always a struggle to get enough parts in students’ hands,” said Hansen.

Hansen remembers struggles being with the program from the start.

“It’s like we need sprockets, How many bearings at how much a piece? It’s overwhelming,” he continued. ”Fundraising is a continual process.”

Without community support, it’s safe to say the program would not be here today, according to Hansen.

“The Education Foundation has been a lifesaver,” said Hansen. ““It’s the community that has stepped up to even make it possible.”

Students were sure to back this up, specifically praising Steve Roth, who has helped out with his own time and dime. Hansen has also seen other programs die due to a lack of resources.

“I’ve seen other programs that have just died because of the lack of support, It’s so sad because these kids are special but so is every other one,” said Hansen.

What struck the highest cord, however, is seeing the progress in each of his students.

“To see the growth that these kids have had to get to that point it puffs my chest up and stresses my buttons just thinking about it,” said Hansen.