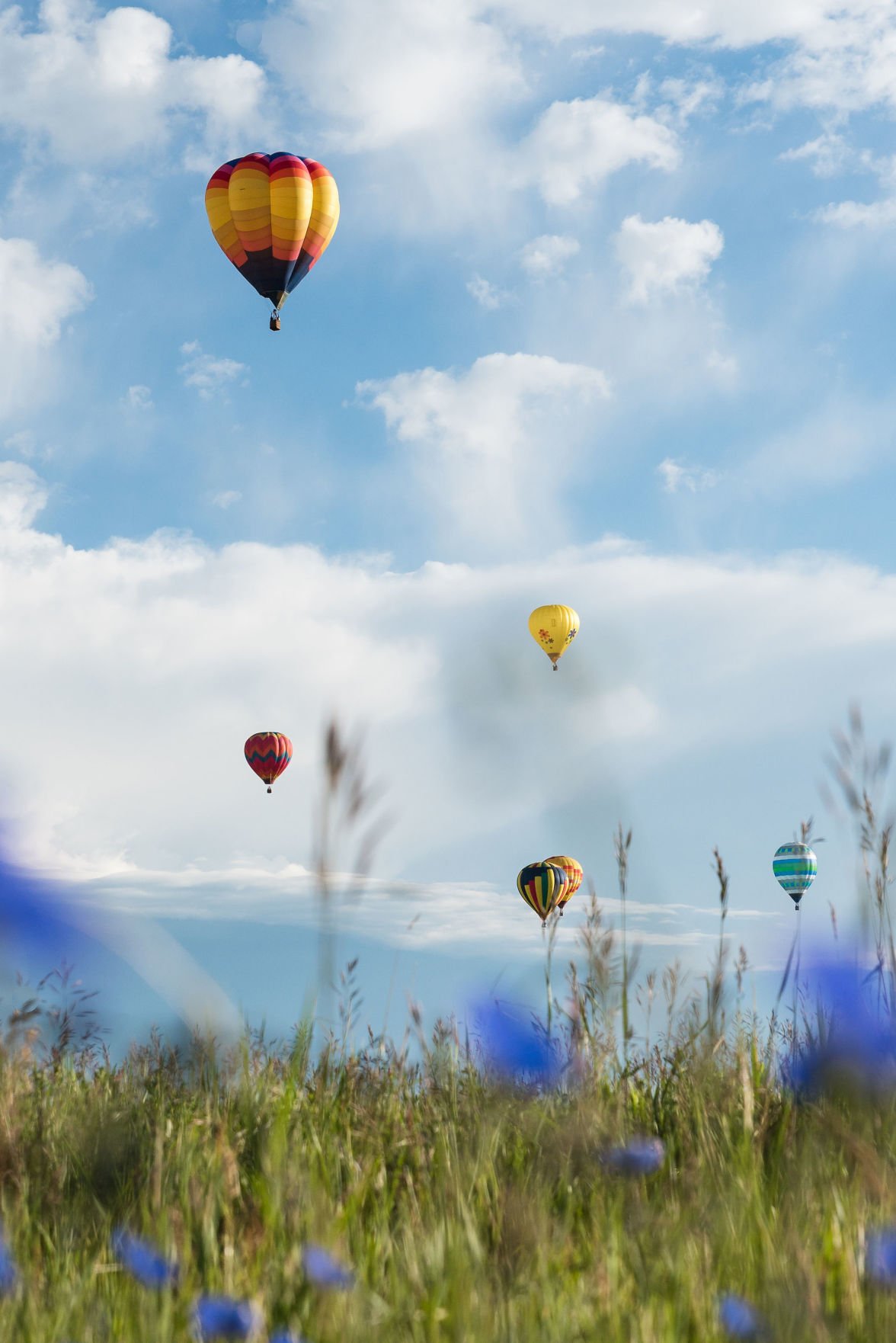 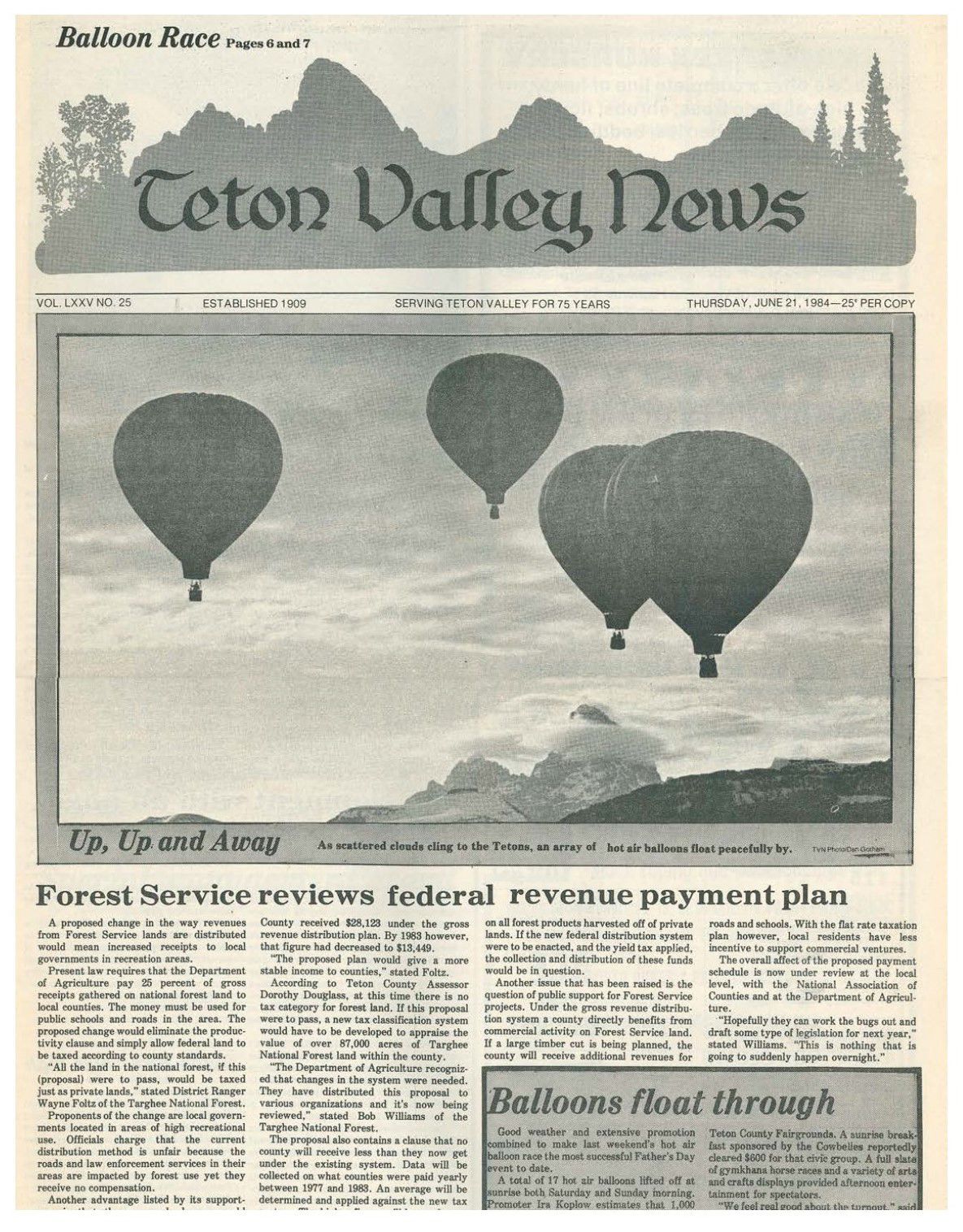 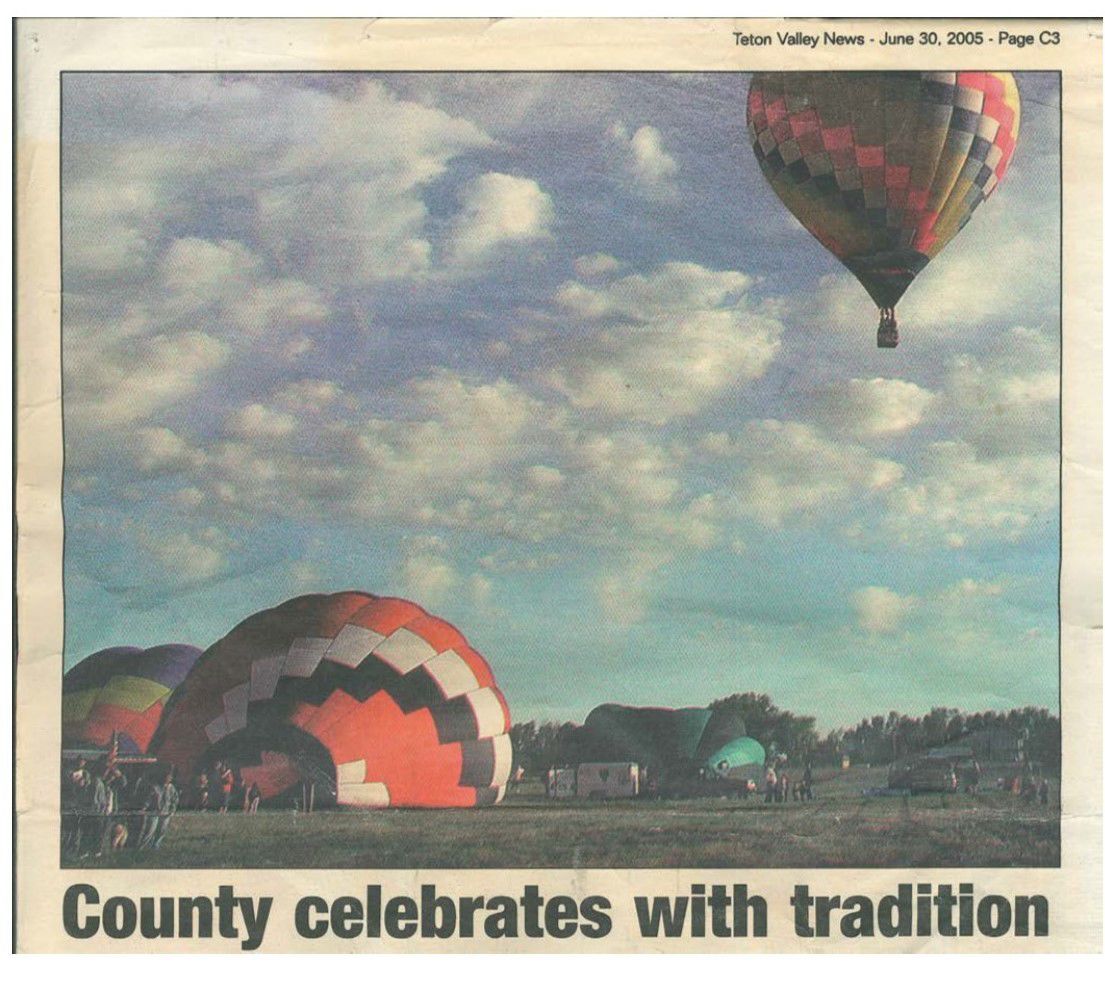 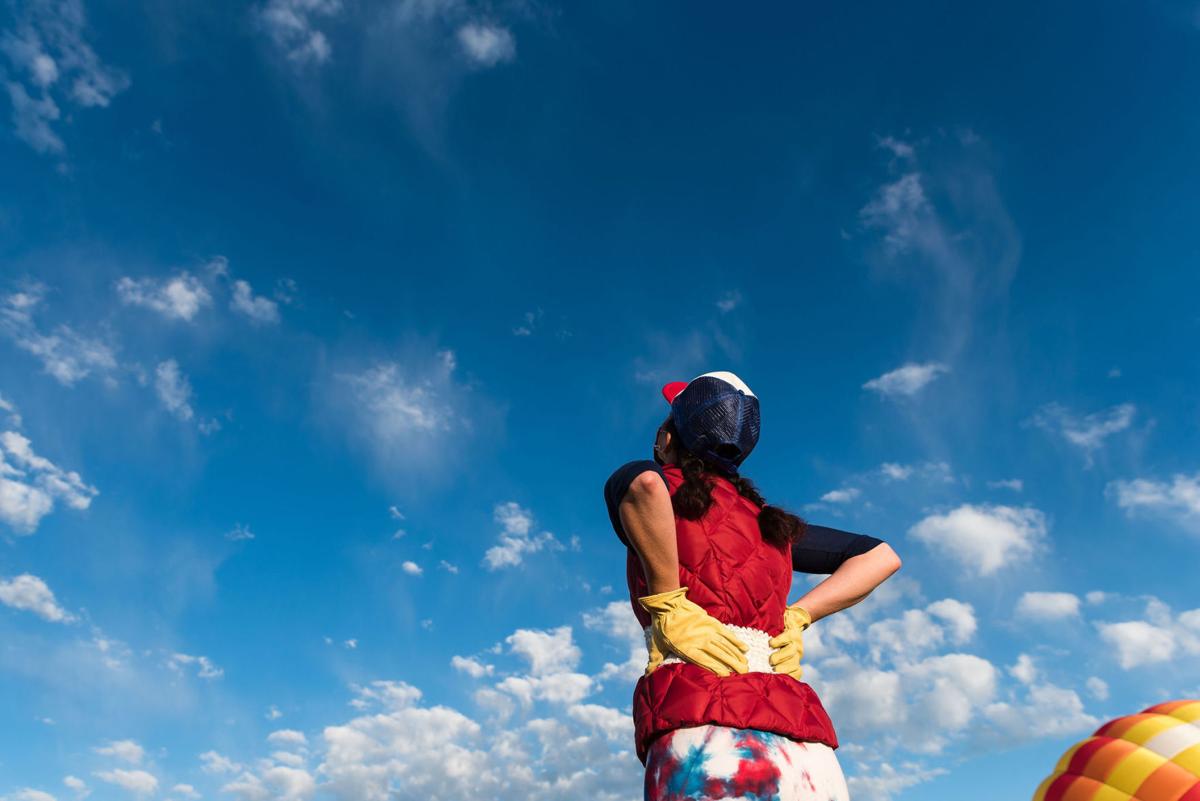 Balloonmeister Margaret Breffeilh gauges the conditions on a clear morning in 2020 by releasing a pilot balloon.

Balloonmeister Margaret Breffeilh gauges the conditions on a clear morning in 2020 by releasing a pilot balloon.

My four-year-old son rubbed his eyes and yawned inside our camper. It was 6 a.m. on July 5, and I had been up for over two hours. By that time, I’d had a cup of coffee (or three) and was starting to feel the magic brewing out on the field. The little blurry-eyed face and rumpled head of hair appeared in the doorway. “Mom, I hear the dragons waking up!” I smiled and walked over, letting him jump off the camper step onto my back. I heard them too – that roar of propane meeting spark, throwing hot air skywards, warming the burners, preparing for flight. I grabbed him a muffin, thanked the volunteer who remained to man the booth, and we took off for a walk in the dawn – dodging the growing crowds, around the trucks and trailers, through the billowing, brightly-colored nylon that danced on the field. The friendly dragons had awoken, pulling at their bridles, yearning for the sky.

But let’s back up a little bit.

In 1981 Teton Valley, Idaho looked a little different than it does today – more of a sleepy agricultural valley than a tourist destination. Local pilot Fred Reed had just attended the 10th annual International Balloon Fiesta in Albuquerque, New Mexico and he came home with an idea. Teton Valley, with its magnificent mountain backdrop, expansive fields, gentle winds, and proximity to the popular tourist destination of Jackson Hole, Wyoming checked all the boxes to host a hot air balloon race. Plus, the economic benefit of pilots, crew, and spectators traveling to the valley had significant merits.

Although most Teton Valley residents didn’t have the foggiest idea what Reed was talking about when he first brought up the idea of a hot air balloon event in the valley, he pushed forward. The First Annual Grand Teton Father’s Day Balloon Race and Glider Regatta was held June 19-20, 1982, bringing eight brightly colored hot air balloons and several hundred people to the valley – the Teton Valley Balloon Rally was born.

Driggs Chamber of Commerce President Debbie Hunter joined Reed’s efforts in 1983. Winds up to 20 knots grounded balloons on the first scheduled day of flights, but on the following day nine balloons took to the Teton Valley skies. Astronaut Jim Irwin, brother of Alta resident Charles Irwin, signed autographs and recounted his experience landing on the moon with Apollo 15. Energy for the Rally was building, but most residents still thought that it would take years to build a reputation that could draw crowds.

Then Ira Koplow took over in 1984. Ira had a vision, and an infectious energy – he leveraged connections, pounded the pavement, and created a buzz. The Third Annual Teton Valley Father’s Day Balloon Festival hosted 17 balloons and approximately 1,000 visitors, creating a bustle for local businesses and making it clear that the balloons were here to stay.

In 1984, with Ira at the helm, the Teton Valley Hot Air Balloon Festival soared – the event was moved to July 4th weekend and B&F Distributing, August Busch’s Budweiser company out of Idaho Falls, jumped on board as an impactful title sponsor. In 1985 attendance quintupled and 20 balloons filled the skies. The local economy boomed. When Chris Nelson, President of the Teton Valley Businessmen’s Association said “What Ira has done most people can’t even fathom yet,” he had no idea just how true that statement really was.

The festival’s success continued to skyrocket. Teton Valley was gaining a reputation as a balloonist’s destination and tourist traffic steadily increased.

In 1990 the Teton Valley Hot Air Balloon Festival was named one of Idaho’s Top 20 Centennial Events by the Idaho Centennial Commission. The festival enjoyed perfect weather, massive crowds and a record number of balloons took to the skies, including several special shapes. The Budweiser Clydesdales wowed crowds in the Balloonist’s 4th of July parade in Victor, Idaho.

In just eight years Teton Valley had evolved, led by Ira’s vision and brought to new heights by the newfound magic of hot air balloons.

While ballooning conditions in Teton Valley in July are often picture perfect, nothing is absolute. In the early 1990s three years of temperamental weather, including 13 inches of snow on July 4 in 1992, brought the Balloon Festival to its knees.

I was taking minutes at that meeting. Although I had seen the writing on the wall, the vote made my gut sink. The next day I called Tom Gough, a pilot who had been flying in Teton Valley since the early days and had meistered the event in recent years (a balloon meister is the pilot in charge of weather decisions and pilot safety at a hot air balloon rally). Tom laughed. “There might not be a rally,” he told me, “but nothing will keep me from flying in Teton Valley on July 4th. I’ll be there.”

The next week I met local pilot Margaret Breffeilh for coffee. We sat for hours, figuring out how we would manage the field rental, the insurance needs, the crowd management. When we finally parted that day, we had a plan.

With the help of the Chamber’s bookkeeper Candy Davis, we formed an LLP, reached out to pilots, rented the fairgrounds, and found an insurance company that was willing to take a chance. With the financial backing of the cities of Victor and Driggs, Corner Drug, and Anthony Owens at Suburban Propane, 6 hot air balloons launched into the 2012 Independence Day skies. That was the day I met the dragons.

Walking Into the Magic

The Teton Valley Balloon Rally, LLP with our team of three women, The Hot Crew, at the helm started to grow. We learned what worked and what REALLY didn’t. We talked to parents of young kids and heard their stories of coming to see the balloons when they were young. We saw the awe on children’s faces; the joy as they ran and danced in the dappled light inside our walk-in balloon, billowing on its side like a sleeping dragon. We realized that what mattered most was making sure that the sense of wonder which we all felt for different reasons would always be there, for everyone.

In 2015 the Teton Valley Balloon Rally became at 501©3 non-profit organization. In 2016, we provided our first scholarship to the Balloon Federation of America’s Balloon Camp to a Teton Valley student. The magic was thriving.

Also in 2015, my son was born – that 4-year-old who woke up in the early morning to the sound of the dragons. These days, you’ll find our vintage camper parked right behind the information booth at the balloon field during the Rally. It’s an office, a playroom, a respite from the midday heat after the field has cleared. From there, Margaret and I welcome pilots, crew, volunteers, spectators, dogs, kids, and anyone else who wants to experience the magic.

We got thrown a curve ball in 2020 when a global pandemic had people all over the world tucked away in their homes, events shut down, uncertainty and fear reigning. There were so many things that we didn’t know, but the one thing that was absolutely certain was that it was a time when people NEEDED the magic. The beauty. The sense of awe and wonder and joy that we had been cultivating over the years. We knew we had to host the Rally. So we did — it was a little different, in some ways it was better. And I’m so, so glad we did.

This summer my son will be 6. It will be the 10th year that the Hot Crew has run the Teton Valley Balloon Rally. The world is still reeling in what we hope is the twilight of the COVID-19 pandemic. As we gear up to celebrate 40 years of magic this summer, my sweet kid is ready for the return of the friendly dragons.

Why dragons, you ask? Come camp at the field. As the morning starts to brighten and you loosen from slumber, you’ll hear them – waking up and roaring their fiery greeting to the day skyward. Come be a part of the magic.