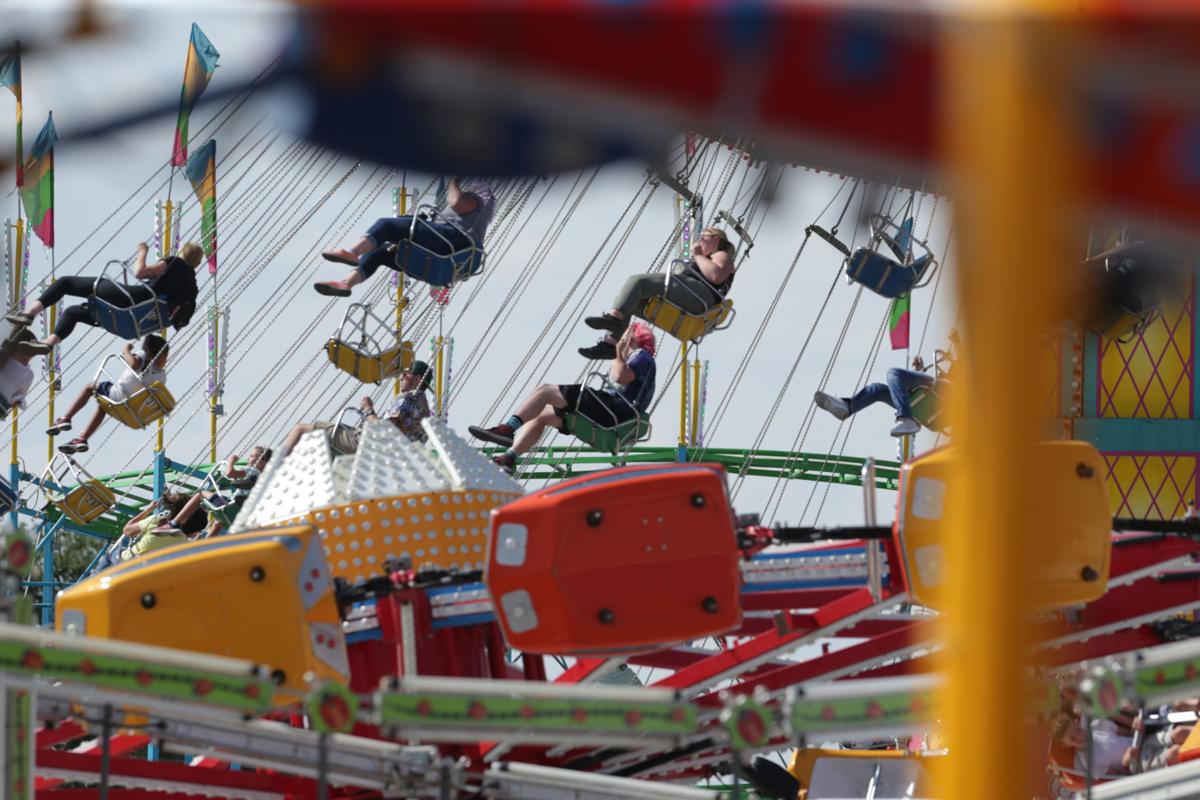 Fairgoers ride the swings at the Eastern Idaho State Fair in Blackfoot in 2018. 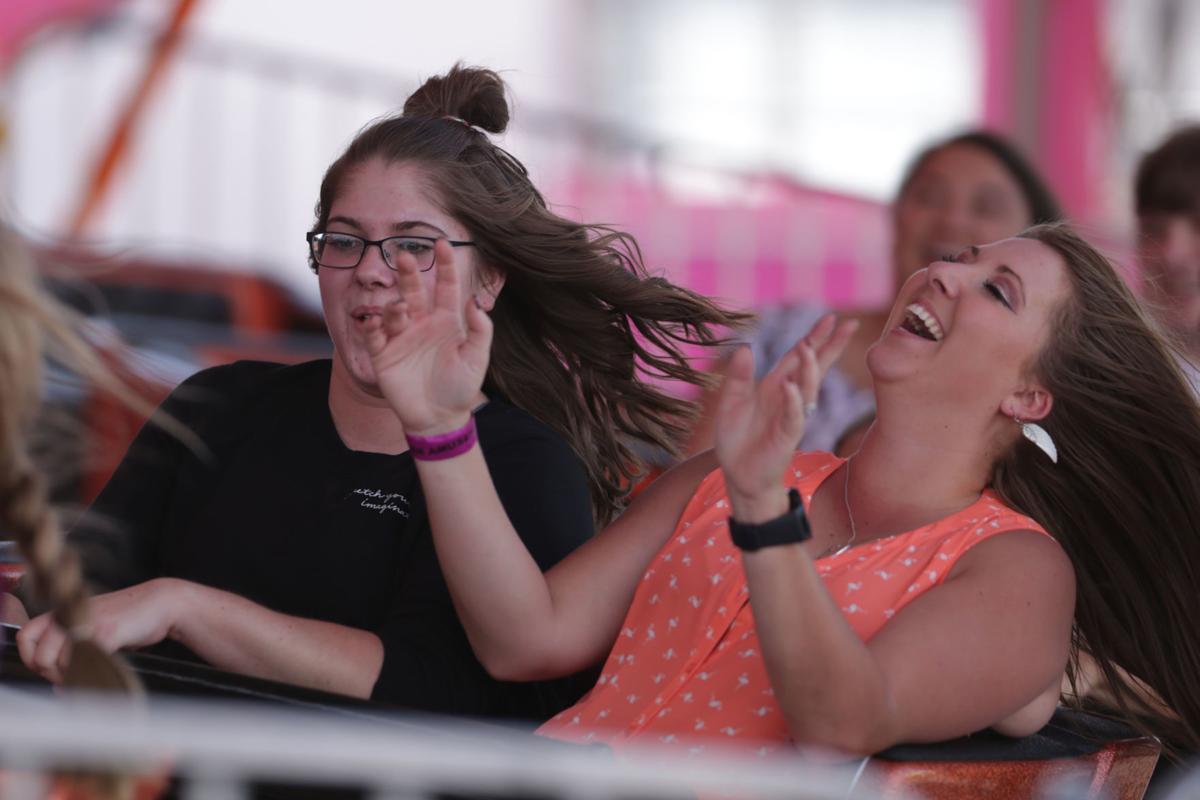 Fairgoers hopped a ride at the carnival at the Eastern Idaho State Fair in Blackfoot in 2018. 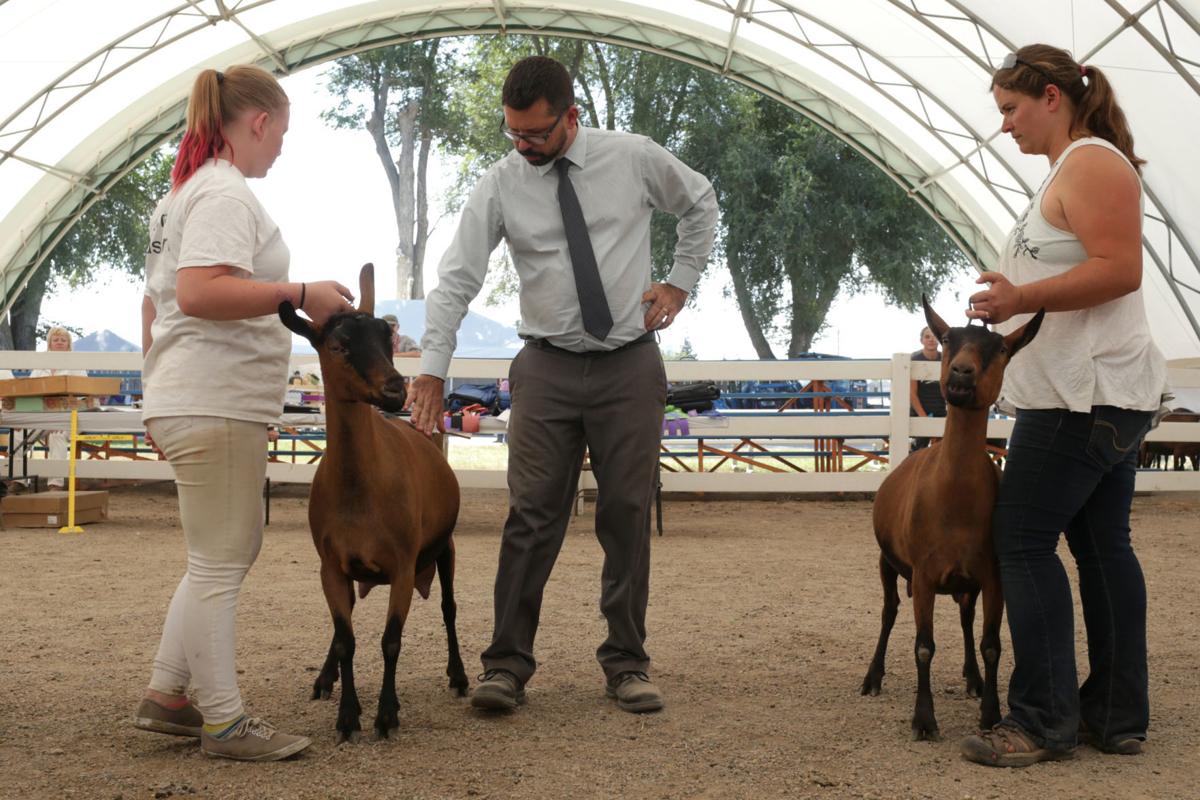 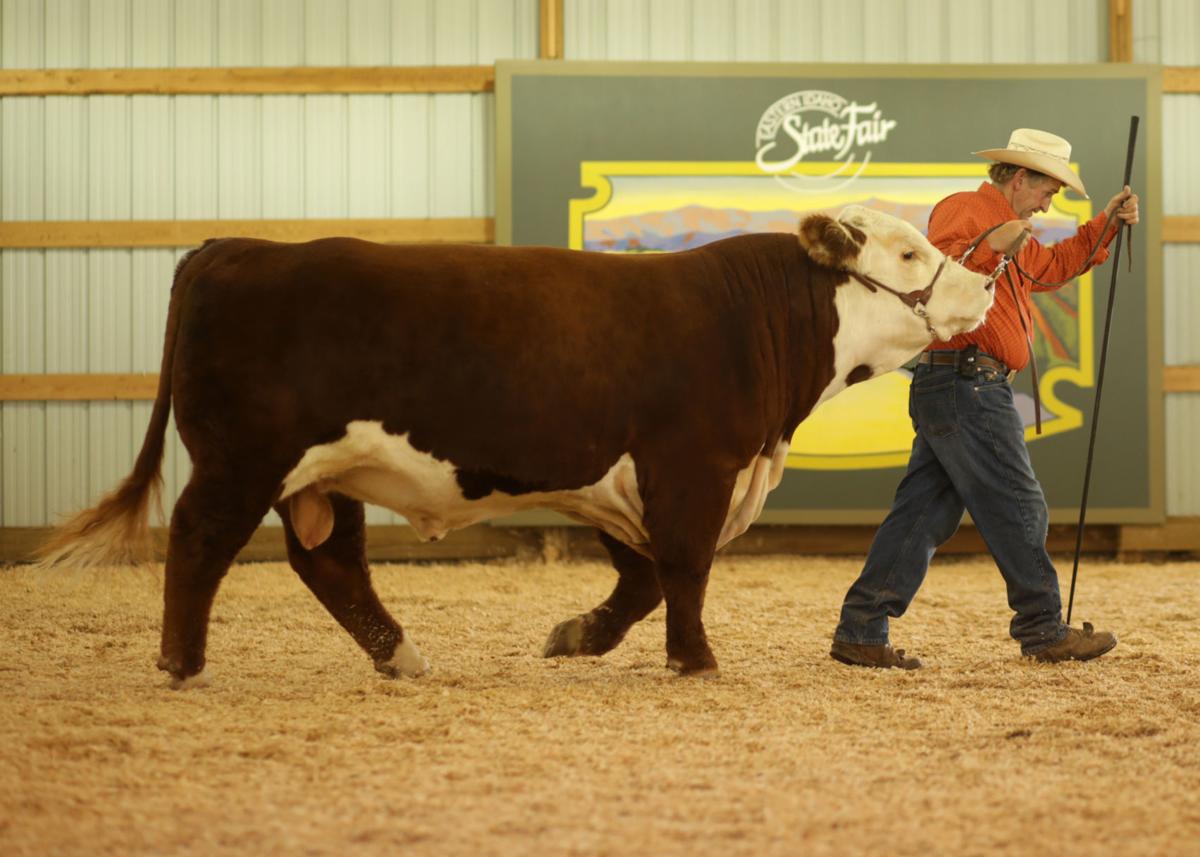 Grant Hirsche shows off his bull at the Eastern Idaho State Fair in Blackfoot in 2018. Hirsche’s bull won the Grand Champion award.

Fairgoers ride the swings at the Eastern Idaho State Fair in Blackfoot in 2018.

Fairgoers hopped a ride at the carnival at the Eastern Idaho State Fair in Blackfoot in 2018.

Grant Hirsche shows off his bull at the Eastern Idaho State Fair in Blackfoot in 2018. Hirsche’s bull won the Grand Champion award.

The Eastern Idaho State Fair board is looking to move ahead with this year’s fair, but the mayor of Blackfoot and Bingham County officials have expressed reservations about whether it is safe due to the coronavirus pandemic.

After a sometimes contentious three-and-a-half hour meeting, the fair board voted 4-2 on June 25 to proceed, the Bingham News Chronicle reported. The fair, which has been held continuously for almost a century except for a two-year break during World War II, is scheduled for Sept. 4 to 12 at the fairgrounds on Park Street in Blackfoot. The event drew about 248,000 visitors in 2018 and 2019.

“A decision was made and we are excited to have the community share in this great event,” fair Manager Brandon Bird told the Chronicle. “We will do everything we can to make this year’s fair safe and enjoyable for the people attending.”

The fair is one of two state fairs in Idaho, the other being the Western Idaho Fair, which is almost as old and is held in Garden City. Fair organizers there announced last month that, while the fair will be canceled due to COVID-19, 4-H and FFA youth exhibits, competitions and sales will still take place. Numerous local fairs have also been affected by concerns about coronavirus; for example, Bannock, Caribou and Bear Lake counties have canceled their fairs, while in Challis the Braun Brothers Reunion festival, scheduled for Aug. 6-8, has been canceled for the first time in 41 years. The Bonneville County Fair, which is scheduled for Aug. 1, is expected to move forward, but with precautions such as requiring masks, social distancing and increased hand-washing and with some events broadcast on livestream for people unwilling or unable to attend. The Bonneville County Fair board is scheduled to finalize its plans Monday night, said county Commissioner Bryon Reed.

Justin Oleson, an Eastern Idaho State Fair board member from Bingham County, made the motion to proceed with the fair. According to the Chronicle, he defended the fair’s history and questioned the validity of the coronavirus case numbers being reported. Oleson said coronavirus is not as serious as people to be, the Chronicle reported, calling it a political tool and media manipulation.

“The point for the shutdown was to flatten the curve so that we had the hospital space, beds, and ventilators available,” Oleson said. “We have done that, now it’s time to get back to normal.”

The fair posted on its website that it is “monitoring the continued developments and actions related to COVID-19” and that while no changes to the schedule have been made yet, “these events are being carefully reviewed weekly, and updated information will be shared as soon as it becomes available.”

“The staff at the Eastern Idaho State Fair would like the public to know that we are taking the necessary measures to protect our patrons as well as our staff,” the statement said. “If you have reason to be on the Fairgrounds, please be sure to practice proper social distancing procedures.”

Blackfoot Mayor Marc Carroll sent out a letter soon after the fair board’s vote threatening to block the fair from happening if there isn’t a plan to reduce the risk of transmission of coronavirus and expressing skepticism that this would even be possible. He said the board “has lost sight of the fact that (the) City of Blackfoot is the hosting location for the Fair, and all of the Fair Board and the sponsoring county commissioners leave EISF and go to their home communities at the end of the day, and leave our city to be potentially ground zero for the onset of the COVID disease.”

“My position right now is that I am willing to evaluate the EISF COVID operations plan in conjunction with the Southeast Idaho Public Health Department,” Carroll wrote. “EISF may be able to author an approvable plan, but at the board meeting their conversation did not make it likely they will be able to achieve that. If we do not have an approvable plan, I will exercise mayoral authority ... and not allow the Eastern Idaho State Fair to proceed,” citing his powers under the state Constitution and two sections of code dealing with the powers of local governments and disaster response.

Bingham County commissioners attended the June 25 fair board meeting, where according to the Chronicle they expressed concerns about exposing first responders at the fair to the virus and said the Idaho Counties Risk Management Program won’t cover anything pandemic-related, leaving the 16 counties in the fair district open to legal action. On July 1 two out of the three commissioners signed a letter to the fair board in which they “strongly recommend that you do not hold the Eastern Idaho State Fair this year unless stringent protections can be put in place to protect our community from the spread of COVID-19, if it is even possible with an event like the Fair.”

The commissioners acknowledged in their letter that they don’t have the authority to force the fair board to cancel but said they “strongly suggest that you adhere to the guidelines of the Southeast Idaho Public Health District and orders set forth by Governor (Brad) Little in effect at the time of the event.” 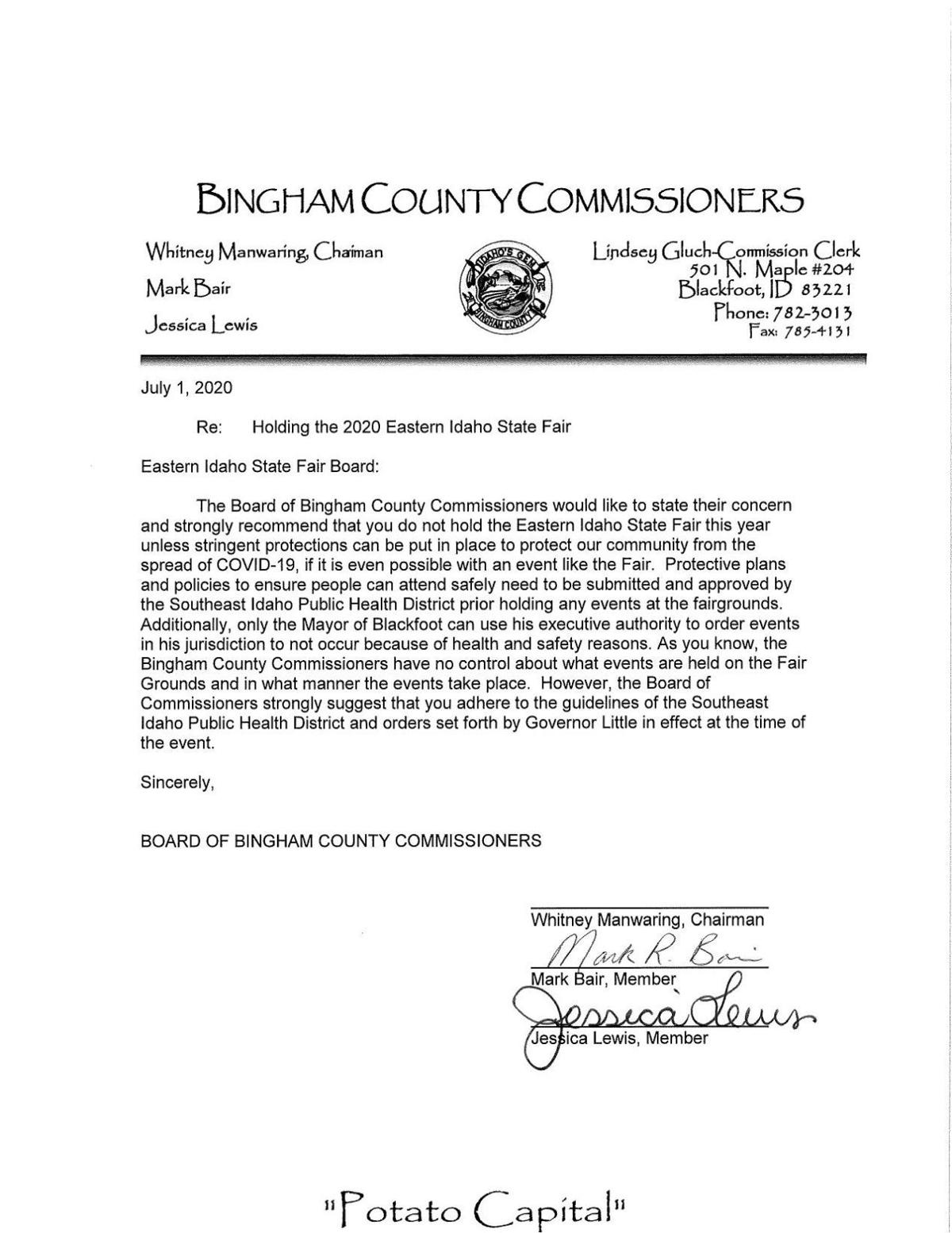 Commission Chairman Whitney Manwaring, who opted not to join commissioners Mark Bair and Jessica Lewis in signing the letter, said he didn’t see the point since the commissioners had already shared their opinions and there is a chance Carroll, who unlike them has the authority to stop the fair, could decide to exercise that power.

“You can say all you want and send all the letters you want, but the bottom line is we’re not the ones (making the decision),” he said.

Manwaring said the feedback he has gotten has been about equally split, with many in support of moving forward with with the fair but others opposed, including some older people or people with underlying health issues who worry about family members visiting the fair and transmitting coronavirus to them.

“Hopefully this week they’ll have a plan if they’re going to shorten it or just do part of the fair, or what’s going on,” he said. “If the COVID keeps going, who knows what’s going to happen a month-and-a-half from now.”

Manwaring said he would support the decision either way. He noted the challenges with enforcing social distancing for such a large event but also that “society still needs to function and go on” and many people are tired of being locked down.

“I think there (are) ways to do it if everyone is cautious and safe about it,” he said.

Tracy McCullough, spokeswoman for the Southeastern Idaho Public Health District, said district officials have been in contact with the fair’s organizers and are encouraging them to submit a plan, which the district’s board would review, ensuring safety for the fair’s visitors and participants.

“In Stage 4, gatherings are allowed so events as large as the Eastern Idaho State Fair are allowed, but we know gatherings like that bringing many people together from all areas increases the risk of COVID-19,” McCullough said.

The number of coronavirus cases statewide has been spiking sharply since mid-June, and as of Monday there had been 8,052 reported statewide, according to the state Department of Health and Welfare. Much of this increase has been in the Treasure Valley, and while cases have also been going up in eastern Idaho so far the numbers have been lower than most of the state. The Southeastern Idaho Public Health District, which includes Bingham County, had seen 246 cases as of Monday evening, which includes 150 people who have recovered. Out of the 94 coronavirus deaths reported in Idaho so far, three have been in eastern Idaho, including one last week at a retirement home in Bingham County.