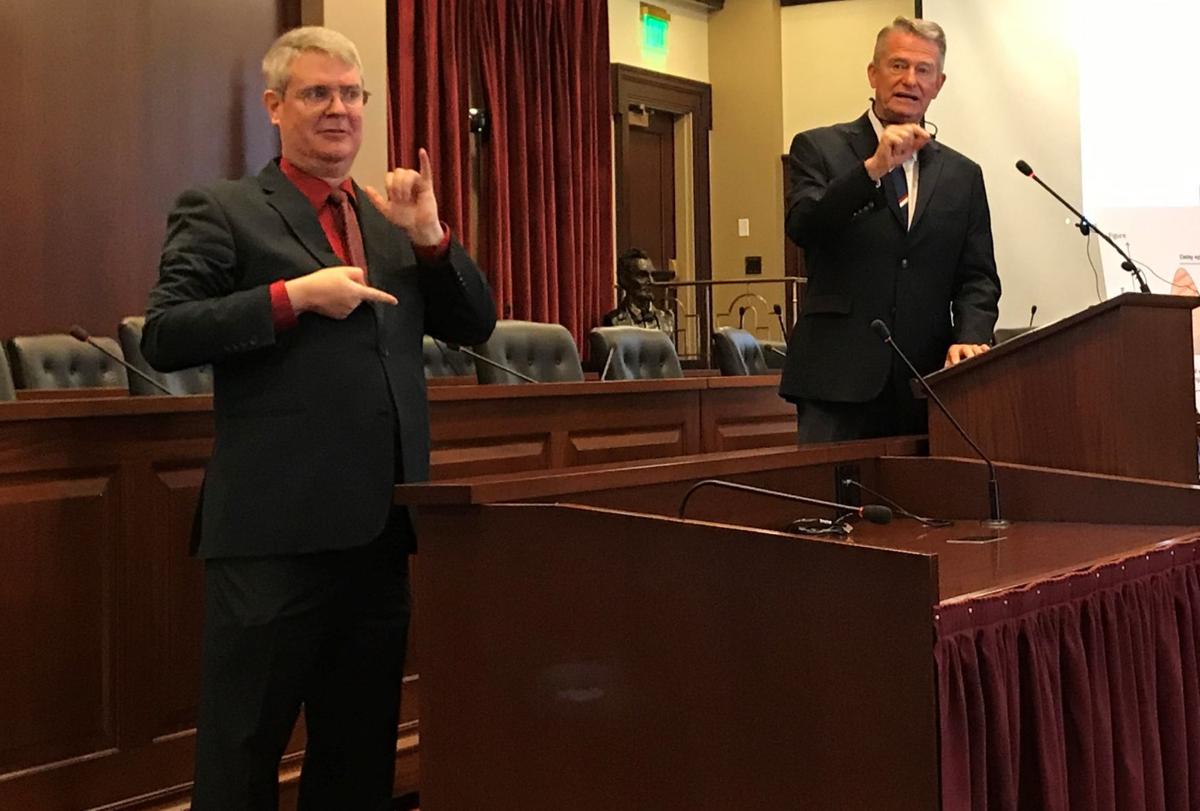 Idaho Gov. Brad Little, right, discusses his decision to keep Idaho in Stage 4 of its reopening from the COVID-19 pandemic on Thursday, June 25, 2020; at left is sign language interpreter Steven Stubbs. 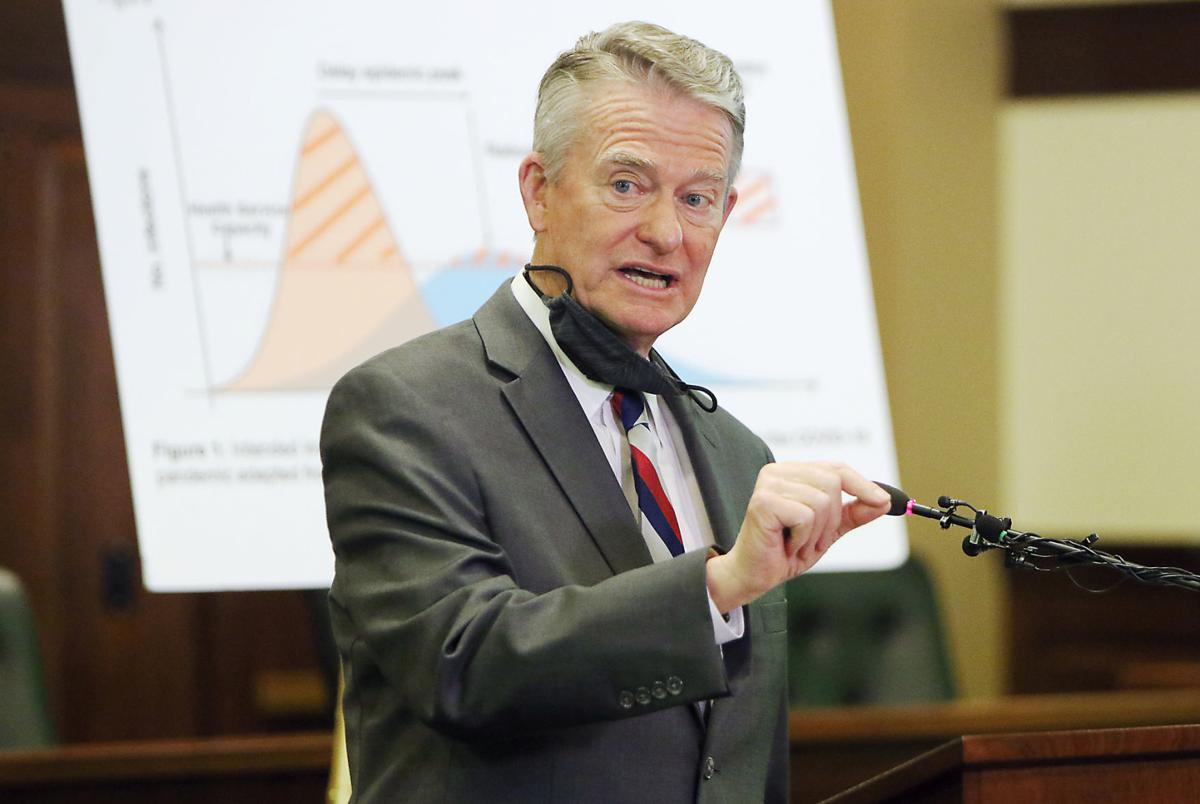 Above: Gov. Brad Little during a June 11 press conference at the Idaho State Capitol.

Top: Idaho Gov. Brad Little, right, discusses his decision to keep Idaho in Stage 4 of its reopening from the COVID-19 pandemic on Thursday, June 25, 2020; at left is sign language interpreter Steven Stubbs.

Idaho Gov. Brad Little, right, discusses his decision to keep Idaho in Stage 4 of its reopening from the COVID-19 pandemic on Thursday, June 25, 2020; at left is sign language interpreter Steven Stubbs.

Above: Gov. Brad Little during a June 11 press conference at the Idaho State Capitol.

Top: Idaho Gov. Brad Little, right, discusses his decision to keep Idaho in Stage 4 of its reopening from the COVID-19 pandemic on Thursday, June 25, 2020; at left is sign language interpreter Steven Stubbs.

'We're tapping on the brakes'

BOISE — Gov. Brad Little on Thursday announced the state will remain in Stage 4 of reopening for at least the next two weeks.

"We want businesses to open," Little said during a noon press conference in the Capitol's Lincoln Auditorium. "We want our children back in school at the end of summer, so please do not let your guard down."

The move comes a day after Idaho set a new record for coronavirus infections, with 243 new cases statewide reported Wednesday — eclipsing the previous high of 222 on April 2.

Ada County, which will stay in Stage 3 under a Central District Health order, also set a new daily record Wednesday with 101 new cases. The order means Ada County bars are closed and gatherings are limited to 50.

The state moved to the fourth and final stage of restrictions under the governor's reopening plan on June 13. Previous stages advanced after two weeks, but Idaho this time did not meet the criteria to advance.

Asked what the difference is between Stage 4 — which allows 100% of Idaho businesses to reopen, as long as they can meet new health protocols — and whatever comes after Stage 4, Little said, “A lot of what’s in Stage 4 basically is guidance in a variety of areas. We were hopeful in an ideal world that some of that guidance we would slack up on, guidance for travel, guidance for restaurants, guidance for large events."

Staying in Stage 4 is a message that it's still important to take precautions such as wearing face coverings, washing hands frequently, staying home when sick, and observing physical distancing of at least six feet, Little said.

The governor also announced a transition to a regional response to COVID-19, rather than statewide.

"The statewide approach to mitigating the spread of COVID-19 three months ago was the right thing to do," he said. "Three months ago, testing and contact tracing was limited, some areas of Idaho faced alarming health care capacity constraints, and there wasn't enough personal protective equipment on hand for businesses and health care workers. But from the start, our plan was to eventually transition to a more regional approach in our response, and that's what we've begun."

When asked if he would consider making masks mandatory, Little said he is "looking at all options." He noted that Idaho has nine counties with no community spread at all, and "it just doesn't makes sense" to make masks mandatory for all Idahoans.

Does Gov. Little blame anyone for the rise in cases? No, he says, because we are not perfect. This trend is just a good wake up call for the state.

Little, talking about Idaho’s unemployment surge amid the coronavirus pandemic, said, “As bad as it is in Idaho, there’s only three states that have a lower unemployment rate than Idaho.”

Asked if that could be in part because of Idaho’s still-big remaining backlog of unprocessed unemployment claims, the governor said probably not, as those are Bureau of Labor Statistics numbers.

Asked why, Hahn said Idaho’s health care facilities, including long term care facilities, have learned a lot about dealing with the virus, and have implemented safe practices including the use of personal protective equipment. Health care workers are just like the rest of us, she said — as they go out into the community, they can be exposed where there’s community spread.

Ada County, seeing an exponential rise in cases in June, moved back to Stage 3 of reopening on Wednesday. The order, issued by Central District Health, means bars in Ada County must close; public and private gatherings are capped at 50 people; and out-of-state visitors from places highly affected by the virus must self-quarantine for 14 days upon arriving in Idaho.

Boise Mayor Lauren McLean issued a similar order moving Boise back to Stage 3 restrictions, including closing bars, nightclubs, and bike bars. Additionally, the Boise Airport is only allowing in travelers and essential staff.

Southwest District Health, which oversees Canyon County and five others, does not have plans for further restrictions, but is closely monitoring hospital and testing data to prevent overwhelming the health care system, Director Nikki Zogg announced Monday.

"While the rise of new cases is concerning, the impact to emergency departments and hospitals remains low," Zogg said in a statement posted to the district's Facebook page. "In the last few weeks, 57% of our cases have been in people under age 35, who tend to have mild symptoms and require less healthcare resources."

Criteria the governor considers in whether to advance to the next stage include:

According to a state press release Thursday:

Idaho as of Wednesday evening is reporting 4,645 cases of COVID-19, according to the Idaho Department of Health & Welfare.

Idaho also logged another COVID-19 death on Wednesday, bringing the total for the pandemic to 90; that death occurred in Ada County.

Wednesday’s tally included 22 new infections among health care workers, the largest increase since at least the end of April, for a total to date of 449. Idaho also added two new hospitalizations from COVID-19 for a total of 300.

Asked by reporters about the hierarchy of decision-making as Idaho moves calls about restrictions to a local and regional level, Little said mayors and health districts will have decision-making authority, as well as his continuing authority along with state Health & Welfare Director Dave Jeppesen. “It’s always going to be about communication, it’s always going to be about what’s best for their constituents,” Little said. “It’s my job to take the science, take the plan that we’ve got, and do all we can to implement it. … It may not be as inconsistent as it may be somewhat of a disagreement about how you interpret the data when the data comes in.”

But asked what would happen if a mayor wants to do one thing, but the local health district wants to do another, Little said he’d mediate or, if necessary, make the tie-breaking call. If either an elected official or an appointed official is standing in the way of the best interests of health for their community, he said, “it’s to their peril.”

“We’ll address it when we come to that,” he said. “We’ll continue to work on that.” He noted that every health district, by law, has a physician on its board. “Ultimately Director Jeppesen and I are responsible for the health care capacity of the entire community, and if it looks like someone is saying ... 'we’ll be the Sweden model where we’ll get herd immunity,' then at that point in time, in consultation with the health districts, we may have to step in. But I don’t want to do that. But I will if I have to.”

Sweden opted against closing schools, businesses or nightclubs amid the pandemic, instead seeking "herd immunity" through exposure, but ended up with a per-capita death rate many times higher that of its neighbors and 7th highest in the world, according to Johns Hopkins University. On Thursday, Sweden's rate was 51.5 deaths per 100,000 population, compared to 37.3 for the United States.